Oh, the Talent We Breed

And speaking of extremely talented children… we weren’t? Well then it’s time to get started. Seth Jacobson, my first born works as an editor for a newspaper chain south of Boston. You know he must be very good if he still has a job. And he is both very good and, as we say in the old country, employed. So that’s what he does to support his amazing and also talented family. Joyce Jacobson, his wife is a creative extraordinary graphic artist, who with her brother have a successful business, http://www.ranagraphics.com/ , in case you need some work done. And don’t get me started about Zak, our grandson, because once I start I can’t stop. But back to Seth, who is a wonderful writer, editor and reporter, but his real love is music. He has been writing and recording (even takes piano lessons) and has finally completed a CD. Two of his songs, "Shaking Me Down" and "Stripper," by Zak Jacobson and the Pryor Convictions album, are posted at: www.myspace.com/zjpc. Take a listen, it’s good stuff.

The youngest of my brood (OK, there are only two but I always feel like it’s a brood because of the number of friends that hang out), having competed for eight weeks in a talent show, last night became the or latest newest Stonewall Sensation. Poppy Kramer, one of the judges, called her the Gilda Radner of song. See, I can tell you’re not as excited as we are because you don’t know the history of the Stonewall Inn. 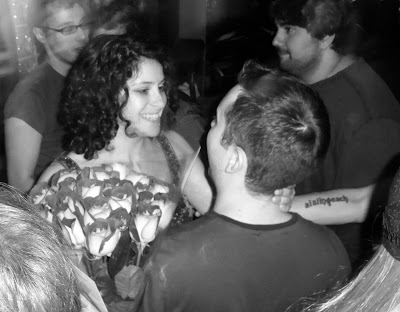 Most importantly, it was the site of the famous Stonewall riots of 1969, which have come to symbolize the beginning of the gay liberation movement in the United States. The riots are regarded as the single most important event that led to the modern movement for gay and lesbian issues. A few months after the riots, the Stonewall closed. Obviously it reopened (in the 90’s), because last night, Jordan Kai won the Stonewall talent contest and she will be riding and singing from the Stonewall float in the Gay Pride parade this Sunday (First section 17th float if you're looking) Now you can get excited. So am I not the luckiest breeder around. We’re just sayin’…Iris

gilder radner of song is a good way to describe her, i was trying to describe her to ernie last night and i said she has some bette midler-ish qualities to her. we watched some of the songs on the website but we wanted more! thanks for more! love, joyce

I am kvelling on so many levels. I will say "I knew her when." the other Joyce

Thanks for your love and support. It means so much to all of us. And she was so sick that night she hardly had a voice so these are compliments sh will really appreciate-- tomorrow the parade and we'll send more.