Randi Zuckerberg, sister of Facebook founder Mark, says we should never post pictures of our friends on FB without asking their permission.  “It’s a matter of human decency,” she said.  Is she kidding?  There is nothing about FB that has anything to do with humanity or decency.  When we join FB, we are asked, (in pages and pages of confusing text) to sign away all our rights to the things we post.  Most of us use the site to keep in touch with our friends, find out what mischief our kids are planning, or because it is a convenient way to communicate.    Same with Twitter, although, to be honest, when my kids explain it to me it sounds good –aside from the hash tags.  But when I try to use it, I get confused about what I am supposed to say about what I’m doing or why I should care. 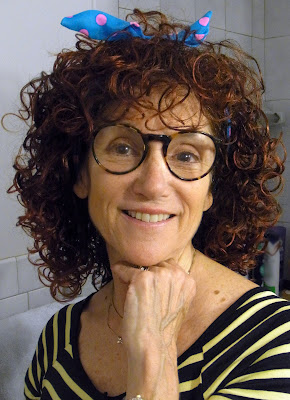 Just because I post a picture of myself, doesn't mean you're allowed to SEE it!!Jeez...
Anyway, let’s get back to human decency.  Don’t you wish you could ask the Zuckerbergs to define decency?  Is it the ability to screw your friends, but in a way that makes you feel like it was not only right, it was essential.  Mark could never have achieved the level of success he achieved without help from someone.   Unfortunately, the definition of what was “needed” in order to move or to progress is to get rid of people who are no longer “useful.”  It is not my idea of having a good time.  When people take a chance either financially or time wise -- because they believe in you or something you are doing--  why would you want to screw them.  Facebook does enable us to catch up, have fun, and to keep abreast, but it is only successful because people felt a need to connect.  What a sad commentary when people who have no idea about decency, feel it necessary to lecture anyone about right or wrong.
But that’s not what I wanted to blob about.  Funniest idea of almost all time comes from my beloved.  Last night we went to see “The Miserables.”  It’s a show everyone in our family loves.  Before the movie begins, David says to me, “I should stand up and welcome the overflowing movie crowd to a special presentation of the “Sing-along Les Mis.”  I laughed till I died, and they buried me and it tickled and I laughed till I died…..

Sorry, I digressed.  Can you imagine how the customers, looking forward to being entertained by Russell Crowe (who can not sing at all), would have reacted?   We might have to go back to the theater and actually try it.
For years, going to the movies on Thanksgiving or Christmas day was something we did.  It started when, as a family activity, we all went bowling.  But after a few rolls down the alley, my mother (who attended, but refused to participate) got bored.  So we switched to a movie.  We have seen “Guilt Trip,”  which could have been my life, “Hyde Park,” which we thought was going to be about FDR, the war, and the King of England – but it was about a number of love affairs he had and how willing all the women were to compromise themselves for him.  And “Les Mis,” which I prefer on a stage because I like the grandeur (the bigness) of the set and scenery, the way the show envelopes the audience,  and I like to choose my own persepctive of the characters.  Here, each scene was a close-up ending with a full view of the character and surrounding scenery.  Just one opinion.  But it is worth seeing because the focus of this production is the acting and the story, (the music is secondary – there is something to be said for dubbing), so for the “Les Mis” beginner, it’s easier to follow.  (You can actually understand what the hell they are saying.)

Anyway, we are all happy to begin another year.  We wish it wouldn’t come as quickly as it did, but as my Grandfather said – Life is like a train.  When you are young it seems you are on the local.  And when you get older, it becomes an express.  Happy and a Healthy New Year to all our Blobby, We’re Just Sayin’  friends.  We’re Just Sayin’…. Iris
Posted by Iris&David at 1:44 AM No comments:

Those Friends, You Know the Ones

The prettiest windows in New York, are those at Lord and Taylor.  They are the same window every year but they are lovely and traditional.  Intricate scenes of the holidays, all with moving parts and friendly faces.  No flash or superficially trendy.  Maybe they are not the same every year but they look the same, so they seem the same, they feel the same, which is a good thing.  There has to be some kind of consistency, something you can count on, and for me, it’s the Lord and Taylor windows.

Two days ago I walked all around New York. It started out to be a short walk, but, after walking about four miles (I was trying to avoid heavily populated tourist areas), I got tired.  It was too bad because didn’t want the journey to end.  Something happens to me this time of year.  It’s kind of like a “Cold Case” phenomenon.  At the end of each of those shows there is incredible music, and the detectives see the dead people whose cases they have been investigating and finally solving.  For me, there is no music,  but I do see friends, who are now merely wonderful memories.

It’s hard to explain any of this in a rational way, but you know how programs like CBS “Sunday Morning”  wrap up their year with a list of notable people who died in 2012?  My wrap up is not quite the same.  I see people who have also been gone for decades.  The sighting is often triggered by a sound, a smell, or a taste. I might be eating at some restaurant  and I’ll have a bite of something.  The next thing that happens is that I see the person who I might have been with when I tasted a similar food.  But here’s what so strange.  The dead person I see (in a living being), always smiles at me like they know the secret.

Although the person I see does not always look exactly like the person who passed away, there is always something so familiar, that I know it’s them.  There is no reason why it happens more at this time of year, than other times.  It just does.  It is always comforting and rather than frightening, to meet my old pals under these spiritual circumstances. However,  I am glad to know they are still around. When I see my friend it triggers all kinds of memories. There is a sadness whenever this happens, because I know it’s only going to be momentary, but better fleeting than not happening. It’s also a little frustrating because I always remember something I want to ask or say to them.  Although I know it’s not going to happen right there and then, I feel like, at some point it will.

This all must sound a bit “Looney Tuney”, but just because it isn’t an every day occurrence for most of humanity, doesn’t mean it’s a fantasy. Quite the contrary. (As we say when we can’t think of a closing.)  It makes sense that people who have a positive impact on our lives,  always remain with us, no matter what the form they take.  And these little personal round-ups at year’s end seem to be the perfect time to take a breath, and know that somehow we’re still connected.  (Cue the music, rotate frame rate to Ultra slowMotion, ....    enter the Friends.)    We’re just sayin’.... Iris

Posted by Iris&David at 4:24 PM No comments:

It has taken me days to find a way to deal with the murder of those 20 children.    Awake or asleep, I can’t helping thinking about how I would feel if it were my children or grandchildren. Then I think, those babies were everyone’s children and grandchildren. They are supposed to be safe in school. On 9/11, it was determined that the kids in Arlington Va. would be safest if they remained in school.  School, where when we were kids we went to the gym to practice what we would do if there was a bomb scare.  But the bombs were coming from Russia, not from the kid who lived around the corner.

We should not need another law or magnetometers  at the doors of every elementary school in order for this shooting horror never to happen again.  It’s a societal and logistical nightmare.  How do we take semi automatic weapons away from people who purchased them legally?  The ‘legally,’ makes me physically sick.  I get wanting to own a gun.  But who would purchase an assault weapon for hunting or even personal protection. There is something wrong with our society.  There is something wrong with glorifying violence in the things we find entertaining.  Sex has a R rating.  Violence, like chopping off someone’s head, or massacring hundreds of people with a machine gun, does not.   This horrible event has become fodder for a few days of gruesome news coverage and then we’ll move on to the next story.

Years ago, Sara Brady asked me for help with gun control legislation after her husband was shot.  During the Reagan Administration Jim Brady was the Press Secretary when the attempt was made on President Reagan’s life.  Jim was shot and seriously injured. This psychopath  who shot him is looking to get out of the mental institution where he has been for years.  OK parole him, but make him responsible for Jim Brady’s daily care.

Anyway, you can laugh if you want to, but the only way to affect change within the NRA, is to take them over.  All the people who are horrified by the random gun violence and have given lip service to changing the laws,  the strong NRA lobby,  and wrong thinking NRA leadership, should join the NRA, and take them over from the inside. The fact is that wanting to have guns is pretty much 50/50.  Women want to be able to protect themselves, and men want to be macho, or hunt, or just shoot for fun.

But here’s what I know. Significant change will not happen unless we stop thinking about the second amendment as a tool for crazy people to acquire machine guns – legal or not.
The mother and son went out for target practice.  They knew there was something wrong with him so they watched him carefully.   Well I guess not.  If he hadn’t had access to those guns, he might have shot his mother and then realized it was pointless to kill anyone else because it would take too long with a target practice weapon.

That event in Ct. was a clear, “There, but for God, go I.”  Anyone who has a child, or knows a child, or has heard about the gift of children, suffered a loss in that shooting. We
Need to do something to make sure it wasn’t our humanity.  We’re just sayin’… Iris
Posted by Iris&David at 11:23 PM 2 comments: