In my forty years as a photographer I have relished the element of chance which has always lay in wait. The idea that I could somehow arrive somewhere, camera in hand, and come away with something which would tell a story to the whole rest of the world otherwise absent, was a very appealing one for me. It allowed me to jump in, without an overly self important view of my work, and just enjoy that brush with the unknown. Often it produced wonderful results, for me at least, in places like Jamaica (Bob Marley), Paris (Giscard’s Presidential campaign), and Missoula (the story on the search for the greatest ever slice of American Pie.) The latter cost me ten pounds which I have not since managed to shed. Perhaps the best part of this parachute-in like existence was the chance to meet wonderful, interesting, compelling people who I otherwise would have had little chance to know. One of those persons who I was lucky enough to meet was a former World War II paratrooper named Ed Jeziorski. I met Ed in 2004 as part of a roundup of D Day vets included in a TIME Magazine story called “Why D-Day Still Matters.” In the middle of the muddle that was the Iraq war, there seemed yet to be something valuable to remember about the greatest invasion ever, and the young committed troops who pulled it off. It was a lesson in humility. The mission was greater than any single one of them, and they all knew that many of them and their buddies wouldn’t make it past the first day. Yet to a man, every D-Day vet I have had the pleasure to meet, and that is hundreds over the decades, told me that merely being part of that mission was the greatest, most profound event of their lives. In many ways it defined who they were. It was like a little badge, invisible to most people, of honor which they proudly wore. 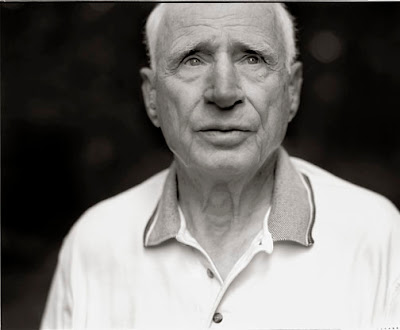 Ed Jeziorski, a farm boy from Virginia became a paratrooper in 1942, and was one of the many hundreds of paras who were dropped miles from their intended location (bad weather, mainly, mixed with the chaos of battle) the night before the June 6th landings. When I spoke with Ed three weeks ago, he told me the long version of that night and day, and I must admit that I hung on every word. He wasn’t quite as robust as he’d been five years ago – age does take its toll -- but the sense of purpose he had in our chat was undiminished, and the commitment he had to that mission was equally unchanged. It was young men like Ed, just off the farm, who joined that “Crusade in Europe” (Ike’s term) and my having had a chance to meet him was for me a true privledge. I was doubly happy that Ed was the centerpiece of our tribute to D-Day Vets on Time.com just two weeks ago.

This afternoon I heard from Ed’s wife Chris that “his heart gave out on him, and he passed away peacefully.” Ed had a lot of heart to give all these years, and give it he did: to his family, his unit, and his country. In the era of statisticians reminding us that World War II vets are dying at the rate of a 1000 a day, Ed Jeziorski was much more than a number. My dad, Ted Burnett, would have described him as “… a beautiful guy.” And that he was, and forever more will be in my memory. Rest in peace, Eddie. We’re just sayin’… David.
Posted by Iris&David at 7:00 PM

My Uncle Eddie was actually a farm boy from New Jersey. He moved to North Carolina not long after the war to marry his sweetheart, Aunt Jean. He lived in NC for many years, retiring to Virginia after the death of his first wife, Aunt Jean. He married Aunt Chris and lived many long happy years in Virginia.
He was truly an amazing, wonderful man with a great sense of humor. The entire Jeziorski (Jaziorski) "clan" were always happy and full of fun. They grew up with little material wealth, but were millionaires in happiness and laughter.
It was truly a wonderful childhood surrounded by such wonderful people.

Ed was my grandfather. I remember very well how he'd tell me his stories, the little pauses and ways he'd say certain words; he would have this look in his eyes when he'd tell a story, and you could tell he was reliving the memories and almost narrating. I like thinking about those long after breakfast and dinner stories. Still hard to believe it'll be 3 years this summer that he's passed.
Tęsknię za tobą i kocham cię!