Allow me to digress …. like you have a choice.  When we lived in DC and then Virginia, our house was the center of entertaining, especially on holidays.  We were famous for our New Years, Passover, Thanksgiving, Hannukah and Super Bowl celebrations.  New Years always included caviar, blini and until we broke the machine, melted raclette and sweet gerkins.  One year David came back from Russia with a dog food bowl sized container filled with caviar.  In fact, since everyone always hung out in the kitchen, we realized the kitchen was too small and built a kitchen addition.   Passover we usually wore silly hats, and Hannukah was the time for songs, karaoke, latkes, and dancing.   David and I got engaged one New Years Eve and decided we needed to get married within three weeks or we would talk ourselves out of it. It might have been four weeks because we didn’t want any silly old wedding to interfere with our Super Bowl party.  Some of the best New Years Eve parties were with good friends and always included David taking pictures in the magic chair in his studio. We still have the chair, it is still magic and it is in his new studio.  For the last few years we have celebrated with family at Captain Jakes, a place which is owned by friends, and the food is excellent.  Always a good time.

A few years ago our friend Karen got married on New Years Eve, which was fabulous.  There were  two icings. One was on the cake and the other was that we could see the fireworks  across the Hudson River in New York City.

After this terrible year we were looking for a happy celebration.  We made reservations at one of our favorite places, the Cafe Chardonnay.  But at about 5:00 David ran into a few neighbors, who we call our 'pod people' and the dinner decision was changed to a socially distanced drink at the pool.  We decided to get dressed up. I wore glitter in honor of my mother - David and Paula merely dazzled. It was just terrific.  This is a nice small community where people are covid careful and good fun.  After the pool drink we came home, drank some more, set the table in the formal dining room and had a steak and salad dinner.  It was a perfect evening.  It is unlikely we made it to midnight, but since there was no colorful antics in Times Square - other than a tipsy Anderson Cooper -  and Dick Clark is dead, it didn’t matter. Celebrations in New York have become so complicated a good time  is hard to find. 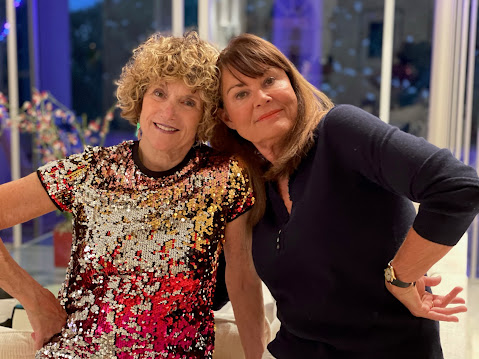