(The Other) Mr. Deeds Goes to Washington 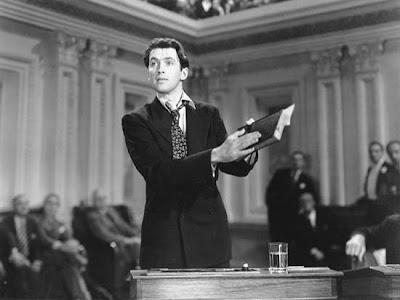 the "other" Mr. Deeds
For those people who either don’t live in Virginia or that area, and those people who don’t pay much attention to politics in general, there was three person primary for Governor. Terry McAuliffe, Bill Clinton’s good friend and fundraiser – a rich guy who might have had a house in Virginia but was really a Georgetown guy, ( some thought he resided at the Café Milano), raised $7 million for his campaign. He was not a person who actually had any government experience, but was chair of the DNC and did glad hand all the right people.

Brian Moran, who raised 3 million and did have some Virginia political experience—he served in the House of Delegates, was best known because he is Congressman Jim Moran’s little brother—and that would be good except Jim Moran is of late, universally disliked. But there was a time when he appeared to be taking the lead from McAuliffe and that wasn’t such a surprise considering no one knew why Terry was running. Some would say he was so arrogant he thought he could win because played a good golf game with the ‘right’ people.

Creigh Deeds, who spent $1.50 on his campaign, happily declares "I'm a Presbyterian”. (No surprise, Creigh is certainly not a Jewish name). He said, “I believe things happen for a reason." I’m with him. Things do happen for a reason, and the voter made the determination that, despite his lack of funds, he was their only chance to beat the Republicans on November 3.

There are those that say the Washington Post endorsement was the reason he won. I disagree, the Washington Post endorsement made the voters comfortable about their decision to vote for someone who was not a household name. “Mr. Deeds has time and again supported measures that might be unpopular with his rural constituency but that are the right thing to do, for Northern Virginia and the state as a whole. He has demonstrated an understanding of the problems that matter most, the commitment to solve them and the capacity to get things done. Mr. Deeds may not be the obvious choice in the June 9 primary, but he's the right one.” http://www.washingtonpost.com/wp-dyn/content/article/2009/05/21/AR2009052103845.html

Mr McAuliffe and Mr. Moran, were certainly better known – even if it was only their names, but they had neither paid their political dues, nor had they really done anything that would be considered important. Mr. Deeds has a solid record on the environment, he wrote Megan's Law, which allows public access to the state sex offender registry, and sponsored the Amber Alert Program to keep our children safe.

The sweetest part of the Deeds victory is that it sends a message to all those people who think that you can buy an election. No matter how hard a candidate works to win an election, they simply can’t do it unless there is some substance and and, oh yes, a little humility and a touch of honesty, can’t hurt. Sometimes you wind up with a George Bush because he seems the best choice and you either want change or no longer want the status quo but for the most part, people will see through all the hype and they will elect the best person for the job. And now, if Mr. Deeds wants to go to Washington, he will have to defeat the Republican candidate in November—but not many people know who he is either.
Posted by Iris&David at 1:53 PM

Okay, I don't mean to be a snot, but it was Mr. Smith who went to Washington. Mr. Deeds (Gary Cooper, not Jimmy Stewart) went to "Town", specifically New York. And, uh, the new Mr. Deeds would go to Richmond, not Washington, being as you say governor should he win.

But it was a nice try. Both movies are really good.

Oh Damn.. well .. lets face it.. two great guys, Deeds & Smith, two great actors Stewart and Cooper, two great flicks, Town and Washington. We tried testing "Mr Deeds Goes to Richmond" but the focus groups found that Mr Deeds Goes to South of the Border" was far more interesting, but that would have implied a connection to South Carolina. And "Mr Smith Goes to Cleveland" didn't test well either, so we used a combination of poetic license and over-investing in Google. But you're right. Two great flicks.