Every five years, like clockwork, there is a reunion of some sort.  The one I am about to celebrate is not one that I can even believe is happening.  In fact, everyone who is of the same age, or close to it, can’t believe that time passed so quickly.  It happens… the difference between our generation and our parents, is that at 50 or 60 or 70, they didn’t feel like they were still 20, or 25, or 30. At least it never appeared so.  They were just what they were.

One of the things we are going to do at the class luncheon is to ask people to describe their lives in 2 minutes, Try it.  Unless you did absolutely nothing but pick your nose, it is almost impossible to narrow what you think was important into a two minute snapshot.

Here’s my snapshot (I knew you were desperate to know).

Got my Masters in Communication Theory (whatever that means), had a baby.  Left out getting married because that wasn’t one of my finest moments. Was a University Professor for sometime.  Accidentally found myself working in Presidential politics. Moved to Washington (where else would you do that). Got married again (this time it was great)  Had another baby. Wrote two political humor books and a documentary.  Decided to write and produce musical theater. Did it.  Moved to NY. Found new family.  Living happily ever after.

Probably left something out but since no one but my friends from college, who are still my friends, could even try to fill in the blanks.  Who cares about health concerns or emotional traumas. They seem not so important in such a great many years. Which brings us back to the reunion.  There are a number of people who are not coming, who we would  have liked to see.  But, for the most part, we see them or speak to them as much as is possible,  so they remain connected to our lives.  Keeping the people we love in our lives is hard work because everyone is somewhere else. But it is well worth the effort. Then, why are we at this reunion?  Did I want to be acknowledged for all my amazing accomplishments.  No, they aren’t so amazing.  Did I want people to say, “Oh, she looks so young. She hasn’t changed a bit.”  Even I, in my most distorted illusion, I know that’s simply not true, even for the people we knew when we were seventeen, and who might still see us through those seventeen year old eyes.

The truth is (and you know how I am about truth), visiting with my kids, seeing one of my best buddies, Soozie, and being able to take a break from Gefilte Fish Chronicles, the Musical, is, for me what this reunion is all about. Most of the professors we admired are dead, or don’t show up. I know, they can’t show up if they are dead. Duh. Oh, and of course, making fun of the people we never liked, is part of the overall joy.

There is too much thinking going on here. So, I’m just going to go to activities, drink a lot, and enjoy the weekend.  Nothing else to say – even though, We’re just Sayin….   Iris
Posted by Iris&David at 1:29 PM No comments:

Team Gefilte, at the White House

When it started, I was curious about how the TV people would present the development of a Broadway musical.  Well, all you have to know is that they have cancelled next season, so all those questions left unanswered will live forever in our minds…. unanswered.

When I invest my valuable time in destination TV, it is usually because I like it.  This was not the case with “Smash.”  It was a terrible show. But for those of us in the theater, we were curious about how they would portray “us.”  Or, what we really wanted was to be able to explain to all the people who are curious about what we do, that we were certain characters on the show. Nothing I liked better than to say to folks, “have you ever watched “Smash?” --- well I’m kind of Angelica Huston.”  Although to tell you the truth, I like the Jerry character, because he’s a Producer with endless funds.

Anyway, I have been spending most of my time like Angelica Huston. Except, she has people who work for her.  One does the PR, in a kind of a sleazy way.  She plants false information with people on the Tony nominating committee which discourages them from voting for anyone but her client.  This woman is truly offensive. Yes, there are sleazy people in the business but never as obvious as this woman.  It’s important to keep reminding myself that it’s only a TV show.  And on television there has to be drama, tension, heroes, victims, liars, sex, villains, and most importantly, pithy dialogue.  Unfortunately, the scripts for “Smash” were terrible.  They made some wonderful talented actors into blithering idiots. Well, maybe they didn’t blither, but it came pretty close.

So, was there any good news about “Smash?” Of course there was. It gave a great many out of work Broadway actors a salary and benefits for at least, the time it was on.  Plus six weeks.

Back to the White House.  We are thrilled and honored to have been invited.  We are kind of like “the little engine that could.” We just keep moving forward with our gem of a show, and eventually we will have audiences all over the country and maybe even the world…. Toot, toot, toot.   We’re just sayin’… Iris 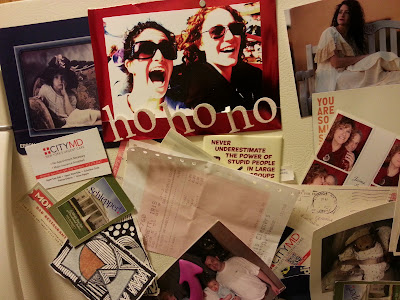 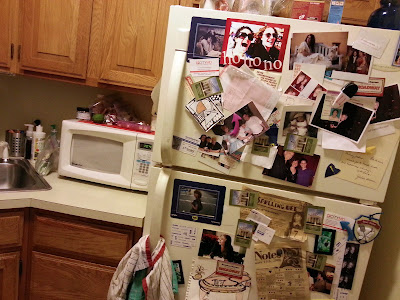 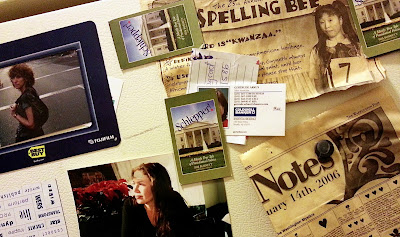 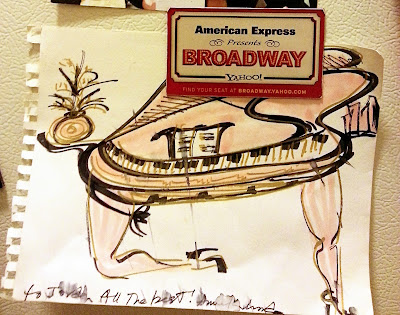 Anyway, take a look at what you have saved in this prominent place and see if it creates a picture of who you are or aspire to be – ours has nothing to do with any of that, but at least I know where to find the telephone number for the garage.
Posted by Iris&David at 1:58 AM No comments: