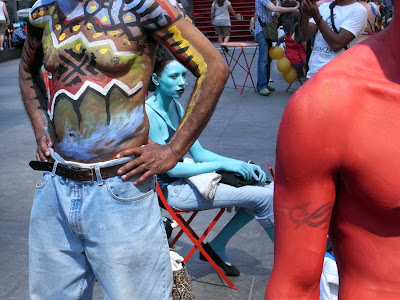 Last weekend, the Mayor of New York decided to close Broadway to vehicle traffic, and make it into a walking mall. We went over to check it out and what we saw was absolutely amazing. From about 42th Street, to the steps in front of the TKTS booth (47th st – the discount ticket booth for Broadway and Off Broadway shows), there wasn’t much walking. But there were a whole lotta people sitting in plastic beach chairs in the streets. Like from 45th to 46th the chairs were red, 46 to 47 they were blue and like that. They weren’t the sturdy kind of chairs that you see in million dollar backyards or around a pool; they were just the cheap, flimsy, breakable -- the pleated plastic kind that rip from too much use. Needless to say, they are being used over and over by hundreds of fascinated tourists and some New Yorkers who were surprised that they could enjoy the nuisance of closing a major thoroughfare. Replacement will make jobs for some folks. (“The Broadway Stimulus!”) We, unlike most people who live in the city, dread the weekend street fairs, limited subways, or for that matter, change of any kind that might result in an inconvenience. 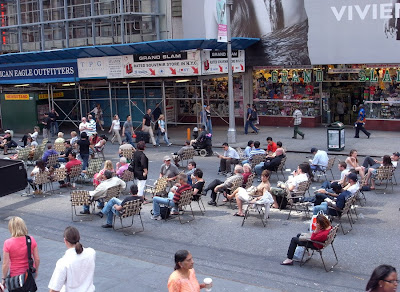 46th street, pretending to be Malibu
What I found most interesting about the decision to close the street was that the Mayor’s office did it without consulting any of the theater people. Talk about interesting politics. My theater friends, (and I am doing my best to develop a well balanced network), said it was retribution for the stage hand strike that shut down the theaters in 2005 as well as the latest threatened strike—which didn’t happen. I’m not sure I can connect what happened with what didn’t happen, or why there wasn’t retribution last year or in 2007, but the word is that with the death of Jerry Schoenfeld, the chairman of the Shubert Organization, last weekend, there has been no one in the theater community ready to be overly solicitous to the Mayor. 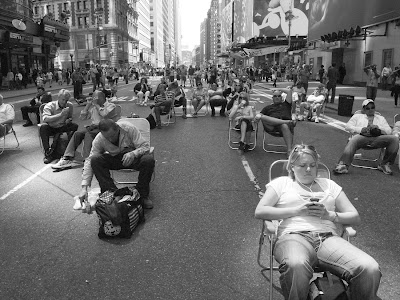 And, when you are as powerful and have as much money as Bloomberg, you never feel like you owe any one particular group an explanation for anything you do that might impact on their livelihood. I’m not sure I believe any of this, but it is true that Broadway can’t move to Kansas – it has to stay in New York. Sure, you can travel a Broadway show, but you can’t move Times Square or all the other theater accoutrement (restaurants, bars, street homeless people). So whatever the politics are between the elected officials and the theater unions or theater community, the latter is not in a strong position to do much about it. 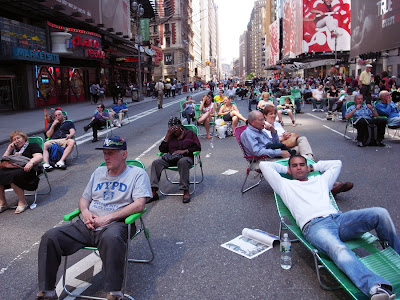 A stage hand strike, while it hurts a specific community of people (theater goers, and theater employees), is not like the NY transit workers strike in 2005, which hurt everyone who worked or visited the city. The absence of bus and subway employees was awful and it shut down the city during the Christmas holidays – talk about debilitating. But as far as I know there was no retribution. The mayor had little recourse because that was a big union. You just don’t screw around with big NYC unions -- a lesson I learned when I was the Director of Security for the Democratic Convention in NY.

Whatever the reason for closing Broadway, it is pretty cool. I liked people sitting around on beach chairs just relaxing and looking at all the signs. A group of Spanish tourists seemed to think it’s been like this since Columbus’ time. Seventh Avenue (which runs parallel) remains open and we didn’t see any traffic tie up. The Mayor says it will lighten the traffic in the area without inconvenience -- sure, sure , sure. The theater people say it will make it harder for the people coming to NY for a show, to find parking. Time will tell. 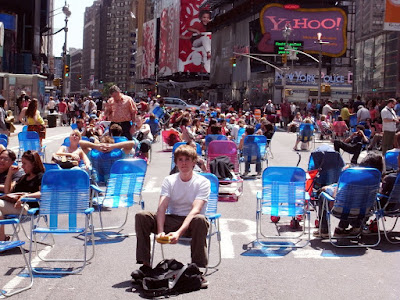 What we learned in DC is that when they closed the streets in front and back of the White House (Pennsyl. Avenue, and E St.) , they were never going to open again and we had to deal not only with the inconvenience of not being able to drive directly from Sixteenth to 20th Street, but with all the incredibly ugly cement barriers [Editor’s note: They call them Jersey Barriers, even in Utah, but they are seldom in evidence IN Jersey.] Since the reality is that Broadway will probably remain closed, I have to admit, I would much rather it be used for people to paint their bodies, 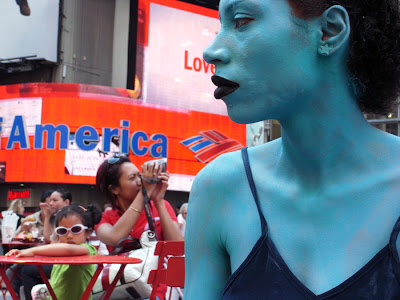 wait in line for TKTS without being run over, and for sight seeing, rather making it available for some overkill Homeland Security silliness. We’re just sayin…Iris
Posted by Iris&David at 2:33 AM