Shows and Shows...Does it Show?


The writers of this blob take great pleasure in letting you know that, in a world of most blogs lasting  a week or maybe a month,   this entry is # 999, in the sixth year of running, and we salute the hard core followers of “We’re Just Sayin’”  for staying with us, through all the typos and trailing prepositions.

http://www.youtube.com/watch?v=_jvKfKJhPBw.  While it is unusual to begin a blob with a Youtube link, in this case you will be glad I did – or perhaps you won’t.

What with the opening of ‘Gefilte Fish Chronicles - theMusical,’ followed soon after by  the actual holiday, the last few months have been particularly busy. Passover has always been one of my favorite holidays. When we were kids our mothers/aunts began the  special preparations weeks ahead of time. They scrubbed every counter in the house, washed the windows, shampooed the carpets and changed all the dishes to the glass dishes with little bubbles that could be used for meat and dairy (glass was cost effective and made my grandmother happy when she did her yearly list of questions.)  We studied the Four Questions, watched Aunt Peppy ferment the beets for the horseradish, and dream about the silver dollars we would receive from our uncles (who we were sure had a silver mine), for finding the treasured Afikomen.  Oh, and we were permitted to drink a glass of wine, which we knew was wrong – and that made it even better. It was always a joyous time, one to which we looked forward. 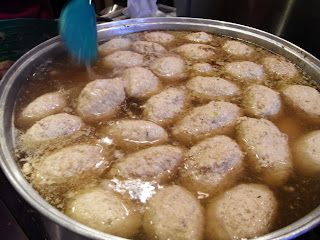 As I reflect on Passovers past, it seemed so many important things have happened to me on or around it. The most important of which was my first date with David in 1979. It wasn’t a particularly romantic evening (everyone invited was told to wear a colorful hat) but he schlepped a  half case of Manischewitz Cream Concord along with a few bottles of actually drinkable wine. The extended family Seder/reunion, was usually on the second night of the holiday, and for many years it was a holiday that was also a reunion.  Then it became a study of the Haggadah, which was interesting, but it was not easy to catch up.  So I had my own Seder on the first night. It was a real Seder, but since a number of people weren’t Jewish and I wanted it to be memorable, we did things like wear silly hats. It somehow made the Four Questions make more sense when read by someone wearing an Orioles cap. 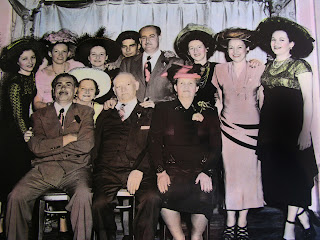 As our Aunts got older and a little less likely to stay awake all night plucking chickens—they played cards instead— the next generation was called on to give a hand hocking the fish, making the sponge cake, assembling the cholent, and grinding the horseradish.  It took them six weeks to prepare for the holiday (we have since done it in 3 days), but they loved to be together arguing, remembering, crying and laughing.  What a gift they gave to all of us who were ready to unwrap it.

David – having been raised in Salt Lake City in what was definitely a “less Jewish” atmosphere, was fascinated by six week process which duplicated what the family had been doing every spring for a hundred years. “The GefilteFish Chronicles”  started as a little family home movie to record for the kids as yet unborn, just what life was like, and became an award winning documentary. And now, to continue this celebration of family, it’s a musical show.

This year we hosted 62 people for the Seder.  We (I hosted, but it is not my Seder—it was a shared family project) cooked for 80 just in case, though once you’re over 50, it doesn’t really matter.  We celebrated the Seder the day before Passover because that was when most cousins and their children could come.  There was some controversy about having a Seder on a day that was technically not Passover—but it was Passover somewhere in the world and it certainly was in my house in Newburgh – with my grandparents, parents, aunts and uncles, cousins and friends.  They were all watching over us, and saying (to each other and in our minds) “…. look at the children.  They’re making an effort to do exactly what we wanted them to do – they are all staying connected.”   I feel sure they said this while they were playing cards, and I know it made them happy, because it sure made the rest of us enjoy the celebration. We’re just sayin’… Iris
Posted by Iris&David at 11:36 AM 1 comment: