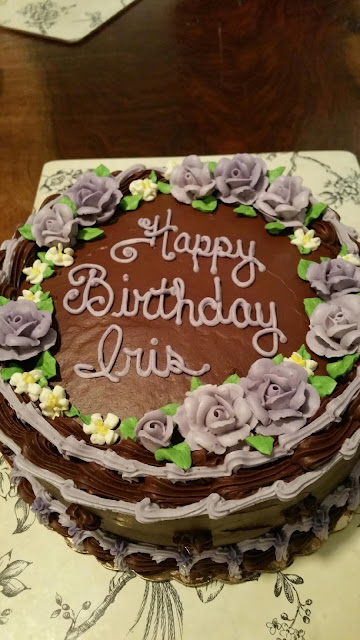 Posted by Iris&David at 7:08 PM No comments:

Today was veterans day, but it slipped my mind until I tried to get across the great isle of Manhattan.  You just couldn’t get past 5th avenue.  I tried almost every street from 54 to 29.  They were all closed.  The decision to take the tunnel into New Jersey made sense, considering my destination.  It was however, made without realizing that there was a giant parade right down the middle of Manhattan.  After over an hour of up and down, not ever getting past Madison Ave.  I asked a friendly police officer who was holding about 300 cars at bay.  “What’s going on” I yelled.  She looked at me like I was from outer space and screamed “The Veterans Day Parade”, she yelled back without finishing the sentence, which was clearly, “you idiot”!

There was only one option, take the FDR uptown and over the bridge. But by then I was all the way to 29th street and I couldn’t get on until I was in the 40’s.  You know the feeling you have when you are satisfied that you have finally made the sensible decision, and so you proceed to follow through and when it’s too late to turn back, the traffic is at a dead stop.  Of course it was, at least 8 million New Yorkers  decided to do the same thing.

The drama was unending.  Having grown up about 10 feet from the eye doctors appointment.  The directions were clear,  you take route 80 to 280 and take New road.  Not so fast!  It was like I was 10 years old again and whenever we misbehaved we made a deal to run down Kelly Lane and  meet on Washington street.  Panicked by whatever terrible thing we had done, I could never find Kelly Lane.  It was the same today. I just couldn’t find route 280, which by the way, I have been on no less than 300 times.  It was 12:15  the first time I pulled over and asked a gas station attendant, (who was one of those people taken by the Martians when the traffic clears up.)  It was 1:00when I pulled into the parking lot of a Mexican restaurant.  Finally someone knew where I was and where I was trying to go.  It was 1:20 when the I pulled into the doctors parking lot.  I had been driving for almost 3 hours.

OK, even I’m boed with this story so I won’t tell you about the return trip.  Suffice it to say, it took lornger to get back to NYC.  Here’s some advice; never go anywhere but shopping on Veterans day – and only if you can walk to the stores.  We're just sayin'.... Iris
Posted by Iris&David at 6:34 AM No comments:

Its been weeks since we blobbed, but with good reason. David was busy with the Photographers For Hope Project. We brought 8 photographers from all over the world to create a visual study of the hope in a city where before there previously had been very little.  At the same time, I was volunteered to be the Campaign Manager for the Mayor, who lost the Democratic primary election.  (It was the perfect storm of politics: everyone thought she was a shoe-in, so none of her supporters bothered to vote).

Anyway, my cousin Steven volunteered me to be her Campaign Manager for the general election.  We ran as a third party candidate on the Independence line, because there are almost no Independence party people.  No one in Newburgh has ever won on a third party ticket. But we did.  We made history in a town that is going through a transition.  The campaign, quite like the photo project, was focused on Hope.  During the photo project no one tried to cover up the problems, but we tried to highlight the movement toward hope as well.  The photo exhibit brought together all kinds of people, crossing ethnic, racial, economic and party lines.  Everyone agreed that it had never been done before.

At the same time, our Mayoral campaign was trying to build an unusual constituency, diverse racial, ethnic, economic and party lines.  We were endorsed  by African Americans, Hispanics, Labor, Republicans and the business community, both new and entrenched for years.  The parallels between the photo project and the elections were too numerous to mention.

Anyway, I agreed to be the campaign manager but only because these incredible people, Jerry Maldonado  and Karen Mejia, ( a city coucil  elected official) understood the communities we were targeting.  We developed a political and communication strategy from which we never deviated.  Our GOTV (“get out the vote”) was right on target, and we encouraged people from the individual communities to help us determine the way we dealt which each community. There was never a moment when we lost control of our message, or our determination to win.  Let me just say, in all my 35 years of campaigns I have never met two people who were more determined, and just plain smarter, than these two incredible people.  In addition, the candidate, Judy Kennedy who was the mayor trying to get reelected as a third party candidate, worked harder and with more diligence than any candidate for whom I have ever worked.  She did exactly what we told her to do – not without questioning our thinking, but once she understood where we were going, she did her best to cooperate.

We won. Our opponent lied, exaggerated, and made things up.  He was not a stable person, which we understood from their first debate, and we played on his inability to manage, understand, or govern with all the difficulties of a city like Newburgh.  He didn’t understand how limited the budget was and kept saying, “we just need to do it”, which of course you just couldn’t do.

This was the first time I have worked in a local election.  When you work in Presidential politics, everything is local, but you look for a national message that works everywhere.  A friend of mine said all politics is local.  I said, if you don’t have a sense of humor get out of the business. Both statements are true, and one never negates the other.  It was very exciting to win when everyone said it would never happen. It was especially heartwarming for this political hack, who has always believed that the truth and being the good guy can make a positive difference.  It was exhausting and stressful but Karen, Jerry and Judy, the mayor, were a joy to work with, and be with, and especially —  win with.  We’re just sayin’… Iris

Posted by Iris&David at 3:52 AM No comments: