Capturing a butterfly with a pair of chopsticks is how I sometimes feel when I’m on assignment. I’m in Detroit for a couple of days, trying to find some kind of symbolic imagery which expresses with desperation and pathos of that part of the Economy which deals with the auto industry. You do get a sense, driving around this town which became not only the home of the Model T (and subsequent cars of a thousand varieties) but of the industrial power which enabled the U.S. to prevail in World War II, that the phrase “former glory” is totally apt. In driving through the city yesterday I spied an old promotion for the train which once connected the city with New York: “The Detroiter” which Im sure was luxurious and filled with first class dining cars, and overnight bunks so that the men who saw themselves as the true captains of industry would not have to be put out even a little, when going to the financial capital to deal with money issues. It’s very easy to see, given the physically enormous specs of the plants here, how one could believe one was, indeed, on top of the world, for to rule a domain such as this, it would require that combination of immense physical strength (the work force) and vision. Plants covering literally square miles of space were not uncommon. 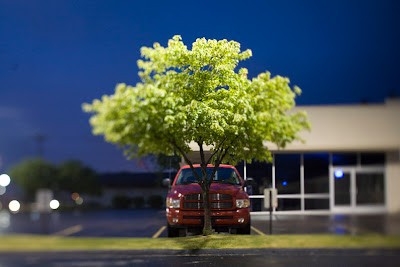 the now shuttered Livonia Chrysler dealership
Today so much of that empire lies in ruins, caught up in what was a smugness of attitude, and the inertia of of ideas. They didn’t react to the market in a way which made their products “I can’t live without that!” Which is, in the end, what you want your products to do. Make your buyers feel that while they may have a choice, the only logical choice is to buy YOURS. Much of the economy is going through this now, not the least of which is publishing, the field I have been a tangiential part of for forty two years. And when I start to feel bad about the 30% or so loss in my stock funds of the last year… (ok, it was more, but it’s come back a bit), I realize that it’s a mere drop in the bucket compared to what the ‘geniuses’ of our age have come up with. While Chevy makes a few very cool cars (they actually do,) for the most part, every Chevy I’ve been inside of in the last few years is like the anti-car. I can’t imagine for one minute that Rick Waggoner, the former Chairman of GM had ever actually sat in one of their damn cars. Wouldn’t you think that would be part of the zillion dollar pay package with stock options and corporate jet deal? To actually sit in , and drive one of their cars. At which point you would imagine the only reaction would be “why are we building this kind of crap?” I guess it’s just too easy to look at the big picture, and make yourself part of the big picture without ever hitting the small picture. For me the devil usually is in the details, and to see these once proud names having totally gone to see is sad indeed. For someone who loved going to the drag races in the 1960s and watching the Detroit muscle cars do their collective things, this is just a sad coda to a very depressing little opera. Maybe there will be some recovery, and I hope there is. We need to have an industrial base in this country that does more than stamp pieces which are assembled in Mexico (I mean that in the nicest possible way.) So, off I go now, in my hideous orange Dodge for another day of practical reminders that paying attention to whats out there should be the first lesson in business. We’re just sayin’…. David.
Posted by Iris&David at 11:18 AM

Nice image. I was born and raised in Detroit. I enjoyed your commentary.

Unlike other historic Detroit railroad stations, all gone now, Michigan Central Station was built as a THROUGH station on an EAST-WEST mainline. MICHIGAN CENTRAL - THE NIAGARA FALLS ROUTE was the slogan of a REAL railroad! The fastest medium-distance passenger trains in North America thundered through southern Ontario on the M.C.R.R. One--MC's "The Detroiter"--was the fastest, regularly covering the 228-mile route in 227 minutes. An ad for the train-- MICHIGAN CENTRAL R.R. / DETROITER TO NEW YORK--is still visible on a railroad viaduct over westbound Warren Avenue near Grand River in Detroit. The former MC roadbed in Ontario is (mostly) preserved as a trail. Buffalo's Central Terminal--the east end of the c1926 "high speed rail line"--has a better chance of preservation than Detroit's crumbling MCS. The city council has ordered its demolition. Attempts to link downtown with new heavy rail service face an obstacle--the tracks that served 3 demolished downtown stations have also disappeared.