In the realm of you couldn’t make it up.  We are a the Palm Beach Airport and I see this woman about 150 feet away pushing her bag in a wheelchair.  She lifted the rope, got into the handicapped line, took her bag off the wheelchair, got into the chair, and waited for a Jet Blue attendant to push her on to the flight. Don’t strain thinking about any of this , there will be pictures.  It was the worst line getting ready to board we had ever seen.  The Jet Blue staff was trying to clear the line and everytime he said, “we need this area cleared”, people who were blocking the way just looked at him, as though he was speaking Cantonese, and never moved an inch.  There was one elderly couple who tried to board early.  They were sent to the back of the line, which they didn’t do. They got out of line and stood on the side. Despite their pleas for mercy, they were rebuffed —over and over again.  We boarded before the issues were resolved. MAYBE  they got on, and maybe they didn’t. 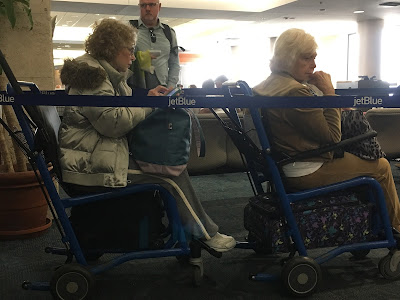 for clarity's sake, it was the woman on the left
“And it’s going to be really really good. You’ll see”.  This seems to be Trumps favorite thing to say — it doesn’t matter the issue.  Everything will be "really really good”  Speaking of good, Melania now has an official White House portrait that looks like  a Glamour Magazine cover.  Never mind, there’s so much else to talk about why should I bother picking on Melania.

Back to the flight.  We are sitting at the airport prepare to be inconvenienced by the Trump visit to what has become the southern White House.  He goes nearly every weekend to play golf and host a head of State.  Here’s a question.  Is a foreign head of state happy to be hosted at Query-Lago (changed the name because it is a question) or are they insulted not to hosted as an official and t the White House?  This is a real question for which I don’t have an answer.

Many people have suggested that Drump (because that’s the way he makes me feel) should be impeached. This doesn’t “really, really” help.  Even if he is impeached he gets to stay in office. Remember Bill Clinton was impeached.  So that is not a solution.  Other people have suggested we should just “lock him up”, with his friend Flynn. At night hey could sing each other lullabies about what they could have done to eliminate the government if they hadn’t been arrested.  It almost sounds obscene — well, right at this moment in history, it is obscene.

So what to do?  You remember the film ,”The Caine Mutiny”. If not go see it on Netflix.  It is about a naval captain who is totally insane, so the crew  mutinies.  That’s what need so happen.  We have a lunatic at the helm and he needs to be “locked up”, “locked away”, taken away from the ship of state.  There is no problem finding reasons why this should be done.  We could start with all the lies. We could move to governing by tweets.  We can go on to discuss his inability to understand foreign policy which might lead to a war with North Korea or Syria, the choice is yours.  Or we might discuss abuse of human rights, the freedom of the press, immigrants, or the 36% approval rating.  And on and on and on….

But who takes the first step toward this mutiny?  By all rights it should be the media, who report the fake news.  Or it should be the Congress, who know that this lunatic doesn’t know what he’s doing.  In the end, it will have to be the people who are suffering the decisions he has made.

David always says that the anchors on the local news are simply playing at being journalists.  In the same sentence we might say that Drump is merely playing at being President.  Never forget “All the worlds a stage, and the people merely players”. Someone bring down the curtain.  We're just sayin'....Iris
Posted by Iris&David at 1:11 PM No comments:

Road Warriors - Then and Now

When we had the energy to work on Presidential campaigns, and it does take energy -- at least the way we did it-- which was without any help, we called ourselves Road Warriors.  We had no assistance, no money (unless we raised it ourselves), never a guarantee of a place to sleep, or an idea of where we would go the next day. We washed our clothes in a bathtub because we never knew how long we would be anywhere. If we ever talked with HQ it was in a phone both, jangling a handful of quarters, quarters which we probably had to raise on our own.  You might say, “it was the best of times and the worst of times”.  We had limited expectations of what the campaign could provide. And we were grateful when there was any assistance provided from “National HQ”.

Imagine how surprised  I was when NBC annointed the traveling staff, covering the campaign, “road warriors.”  Which by the way, they were not.  They were young, smart, journalists, who travelled with the campaigns.  This road warrior got paid, they knew where they were sleeping, were never out of touch more longer than an iPhone touch, and the networks made sure they were fed, because they were members of a union, maybe two.   In addition, they knew that after the campaign they would have a job for which ever network they represented. This was certainly not the case for campaign staff warriors. First your candidate had to be victorious. Then you had to compete with every other campaign staffer who also wanted a job. Everything you did in and round the campaign was truly a battle.

“Advance people,” the people who travelled ahead of the Candidate, were responsible for everything that happened to the candidate from the time the candidate arrived at an event to the time they left. It didn't matter what kind of an event. Everything from  checking sound and lights, to flushing toilets for the Press.  Picking up Press and Staff luggage and making sure it got where it needed to be.  These new so-called “road warriors” never battled more than an angry press secretary.

Maybe I should be pleased about the continuation of the label. But somehow the“warrior”part is only for people that were at odds with just about everyone with whom they had dealings, except other Advance people. Everyone hated them/us, or at the very least found us annoying, That includes other campaign staff like the State coordinators, directors and fund raisers. Because we did battle for the candidate, and the candidate ultimately depended on us, far more than desk staff or local political people.  We had access to the Candidate. Usually close proximity. We briefed, advised, and made on the spot political decisions.   Some of those responsibilities are no longer the job of the advance person, but they still remain responsible for doing "the battle".

Anyway, how about that Sean Spicer and where is Kelly Anne?.  The President came into office without one day of government experience and surrounded himself with people who also had no experience. You cannot drain the swamp if you don't know how the government works. It's not like the private sector, where if you are the person in charge, everyone has to listen and obey.  Nope. We should all be grateful for this. Except he can sign an executive order which might just destroy the environment and other treasured resources-- or freedoms, or people's lives.

Thinking is depressing. We all need to concentrate on the the tasks that make us happy and the people we love with the knowledge the President must be absolutely miserable not being able to get his own way.  We’re just sayin’… Iris
Posted by Iris&David at 9:54 AM No comments: