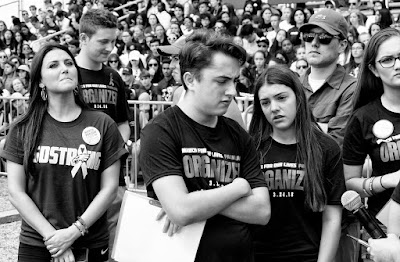 There is nothing more powerful than an articulate child or young person who wants to make change — who advocates against some injustice. Look (if you can bear it) at all those white male Republican elected officials, who do not want to eliminate assault weapons, who are still defending Trump, and who are totally out of place.  They are unconnected to what is actually going on in this country.  You can feel their discomfort, and you just know they are paralyzed by the last two Special Congressional elections. When the protestors confronted Rubio, it was not his best moment.  In fact, the only thing Trump has ever said that we all agree on was his description of Rubio as “Little Marco.”

Back to the important stuff. Last night we were having dinner with our dear friends Jan and Jeff.  Being Communication people we started to discuss the protests against owning guns, especially assault weapons.  You may recall from the first paragraph that I mentioned the voices of children and young people.  We all agreed that those voices were a powerful tool.  People all over the country either walked out of schools or spent 17 minutes in silence.  One minute for each teacher and child who were murdered in Parkland.  The movement has started and the NRA must be at least a little nervous.

Wouldn’t it be valuable to have a course at some high school or college called Protesting 101.  And wherever that is taught, I want to teach it.  It would begin with the history of civil disobedience, probably beginning with the anti-war movement during the Vietnam war.  There were protests before that — like during the civil rights movement.  But those protests were also peopled with young people who had passion and loud voices.  The heat of the Civil Rights, Human Rights and Womens Rights, and anti-war protests had their greatest impact during the 60’s.  The people who participated were mostly young with a vision of what this country should look like in the future. Then those protesters grew up, most lost interest in changing the world, and raised entitled children — who had no idea what it was like to “go out on the streets” and have a voice about injustice.  The 60’s activists were now interested in success, and money — so they could support the entitled children.  But now the children of the entitled (as opposed to the children of the corn —who were bone and blue eyed evil doers) saw 9/11 and the mass murders of other young people in schools all over, and they wanted the violence to stop. (OK I did short cut much of the history and reasons for what happened.  But my blobs get too long). So what do we have now? Voices raised in protest about assault weapons.

If I were teaching protest 101, the course would include the following:

And the next steps, like getting all the protesters to register to vote,
identifying the enemy, like the NRA and elected officials and creating targeted campaigns against them.

Yes, there is more but this is a good start unless there is money passed directly into my hands — me being a 60’s protester who raised entitled children.  You can figure out if you are one of those if you have ever given your child a credit card or a phone before they could pay for it themselves. Anyway, nothing makes me happier than to know there are people who care about injustice and have good common sense.

What’s the difference between a white lie and a lie?  It seems to me that a white lie is like alternative facts.  Can people be so stupid that they believe that facts and alternative facts, or a lie and a white lie are actually the same?  Maybe so. Maybe not. As a person who teaches the importance of the meaning of words, its either sad or pathetic — not the same but equally upsetting.

On a sunnier note.  Joe and Alisha, whose poodle MJ was Tyrone’s short term girlfriend left this morning.  They had been at Ryder Cup Circle for a month.  The dogs bonded, and they were such nice people it was lovely to talk to them. They said they were leaving at 9am so we made our way 500 feet to their condo for the doggies to bid one another a farewell and quick poop.  It was just adorable. We did not say let’s keep in touch or trade e-mails.  It was a simple, “enjoyed the time we spent together”, a little hug and goodbye.  It was really nice and very honest.  We both knew the likelihood of getting together sometime in the spring, summer, or fall was little or none.   And that was OK with all of us.

On an even happier note, I had such with a longtime dear friend.  Before I started this blob, I checked to see if  I had told my Fred story before which was so good it was impossible to believe that I hadn’t but it was unfindable so here it is either again or for the first time.  The category it belongs in is either most thoughtful, most romantic or best first date ever.  It is almost impossible to remember how we met but we both agreed that it was an intro by our  mutual friend and later Ambassador to Chile, Gabriel Guerra. It was sometime in the late 70’s.  Washington DC was a much different place then than now.  The media, campaign staff and security all came to Washington at the same time.  We were, if not friends, always happy to see one another at a party or an event, some at the White House.  Whatever the Carter’s were in terms of governing, they were generous about inviting staff— not even senior, to the White House and the Kennedy Center for holidays and events. One of the most exciting times was when the Kennedy Center honors was created. The Carter political appointees were asked to be escorts for the honorees. I was asked to escort my tap hero, Fred Astaire. He told me stories about the old movies and he asked me if I wanted to dance.  Be still my heart.  Yes, of course I did.

Back to the best date. Having had no discussion about where we would go — movies, dinner, bowling, when Fred picked me up he said that our destination would be a surprise.  So, you can imagine my surprise when we arrived at the now defunct EJ Korvettes.  This was a store much like Walmart.  We parked. He handed me $5 and told me that we should each buy presents for one another not to exceed $5.  It was hilarious. I wish I could remember what we purchased. Not that it matters but the store was hardly what one would call upscale.  Another evening,  we went out for a very simple supper, and had nothing but fun from that day until Fred moved to NYC for a big TV job.  Oh well, life. You can’t live with it and you can’t live without it. ( What the hell does that mean?)

It looks like the investigation about the Trump Administration involvement with the Russians …. Hold up. Why am I ruining this perfectly lovely blob with any mention of the evil Trump.  Not going to happen.  David is on his way home from South Korea.  Haven’t seen him for much too long but, husbands — can’t live with them and can’t live without them.  Probably, I think.