Yesterday and today were days to mourn the passing of some great stars.

As we all now, Judy Garland had a tragic life and why should her end have been any different. On June 22 1969, at the age of 47, Judy and her fifth husband Mickey Deans, a gay night-club promoter, were watching the famed documentary, “The Royal Family” on television. Rumor has it that they had a terrible argument and she fled, out the door, screaming into the street. Mickey, probably used to these scenes, went to sleep and was awakened by a phone call at 10:40 the next morning. Judy was not in bed, and he found the bathroom door locked. He banged on the door and when no one answered he supposedly climbed outside and entered the bathroom through a window. There he found her dead, sitting on the toilet. The official cause was accidental overdose of barbiturates. Supposedly, and isn’t this what theater is all about, there was a tornado in Kansas that day.

Ed McMahon, who died today at 86 and was best known as Johnny Carson’s side kick on the Tonight Show, seemed to be a great guy. As testimony to his niceness (which is rare in the entertainment industry), when he had to declare personal bankruptcy, friends raised enough money to save his home. He admitted that he spent too much money on taking care of ex-wives and five children. He had also been a host of the talent program Star Search and the prank show TV Bloopers and Practical Jokes.
In response to his death, and her Star Search experience, Brittany Spears commented about the passing on her web site. She said, "I am deeply saddened by today's news about Ed McMahon. He is responsible for giving so many artists their first shot including myself. He was a wonderful man and will be greatly missed." Brittany, who was a contestant on the show, eventually lost.


And for me, in the saddest passing of all, was this morning, when John Spencer died again on The West Wing. John, having had a very tough time with alcohol was, like the character he played - Leo McGarry - a recovering alcoholic, Like Leo, he’d always been a workaholic, too. He told The Associated Press in a 2000 interview, “Through good times and bad, acting has been my escape, my joy, my nourishment. The drug for me, even better than alcohol, was acting.”
John was our friend and when he was invited to Washington to shoot "in Washington" scenes for the show, I told him I would host a real Washington dinner for him so he could live the role he was playing. We all sat around with him asking questions about Washington and what we liked about the show, (I confessed that what I liked was that it was the way we wanted things to be rather than the way they were.) And we all wanted to know about what it was like to be from California and playing at politics. At which point he admitted he was from Paterson, N.J. This morning, on the reruns, Leo died of a heart attack while on the campaign trail. This morning, I once again mourned the loss of our friend. And if the show stays in reruns, I will weep every time I see it. 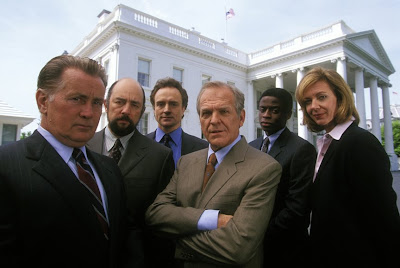 May they, whose lives were so often in turmoil, rest in peace.
Posted by Iris&David at 7:58 PM