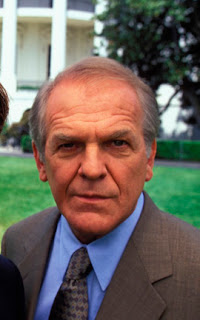 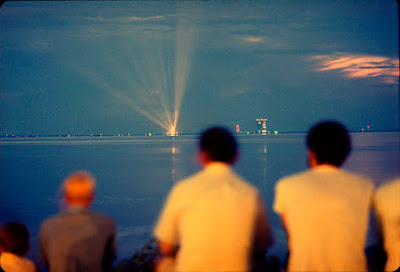 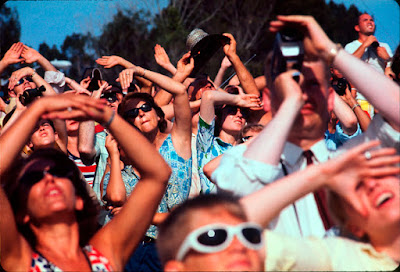 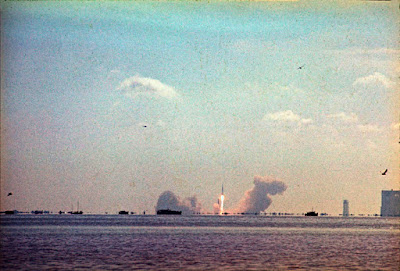 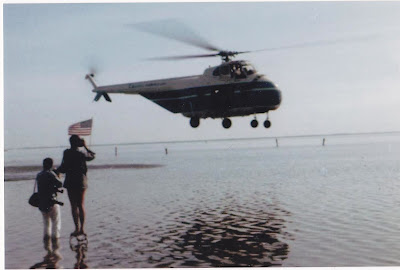 When I received a letter, 40 years later, from one of the subjects in my picture (Published in SMITHSONIAN Magazine) asking for a picture, I wrote back to him saying "if you're in MY picture, maybe I'm in YOUR picture" and sure enough, he found the negative he'd shot 40 years before, and there I was, in my ever-present white jeans, along side Jean Pierre Laffont (who was smart enough to bring a ladder), watching the the launch as a helicopter flew by.
And of course this momentous launch was done in a space craft, state of the art for the time, but whose computing power was probably less than a new iPhone 6. We become so engrossed in the minutae of life (let's be honest, how many of those texts or emails that zombie-like pedestrians read in a trance as they transit a crosswalk actually are of any importance in their lives?) that we miss the real things that count. Friendship, love, a great read, and a cup of steaming gen-mai cha. Don't miss the boat. You just never know when the next Saturn V will lift off.  We're just sayin'... David
Posted by Iris&David at 12:22 PM No comments:


This blob is dedicated to my friend Joyce who was the inspiration.  Everyone needs some inspiration for anything they do.  But first, This was in an email I saw today.  I am always concerned about the fact that David hears nothing I say.  Unless I am standing right next to him. Some people would say he has selective hearing….
Duh.
Anyway when I saw this I thought it was perfect. It is an old Amish recipe for people who are hard of hearing.  Here it is in all it’s glory:

“Onion is a very effective ingredient for hearing loss and ear infections.
According to Dr.  Christopher, it can be used by people who suffer from hearing loss due to infections, inflammations and sudden pressure changes.  Onion  is also one of the best herbal and home ingredients to use for earaches. Dr. Christopher recommends using Onion in this manner:
1. Put an onion in the oven and turn on the heat at 450 degrees.
2. Let the onion heat for about 15 - 20 minutes. Then let it cool in t he oven  until
it can be handled.
3. Once cooled, take it out and cut it into half.
4. If an adult is using this recipe, both halves of the baked onion should
be strapped to the ears and left over night."

Do you not love this?  OK I have said I would put my head in the oven numerous times, but I never thought about onions on my ears.  Although I have said that when I die I want to be cremated like a cholent (pot roast) with onions and potatoes, etc.

But that’s not what I wanted to blob about.  New York City is a city on wheels.  There is hardly anyone who is unattached to a wheeled device.  Whether it is a skate board, a scooter, a bike, a walker, a pram, (we had umbrollers - strollers which would fold up like an umbrella) or a wheel chair, everyone is attached to something on wheels.  It makes me very nervous.  Let’s first talk briefly about the pram/carriage.  Women use them as weapons. They push onto the subway and if you happen to be standing in their way you are chop meat.  Worse than that, they throw the baby way out in front when they cross the street, if the cars don’t stop, the kid is chop meat.

Or, take for example the City Bikes, which tourists rent from a multitude of locations.  I am a big proponent of bikes, but not when the people who ride them are clueless about where they are and where they are going.  It’s New York City, its dangerous to walk, let alone ride a bike in a city that has no patience. And then there are the delivery bikes.  The problem with the bikers is that they just want to get where they are going.  They do not give a damn who happens to be walking in the same place that they want to go.  And they pick and choose whether they are a car or a bike.  It is challenging to be walking or driving when they are on their way somewhere.

Then there’s the scooter.  Every kid has to have one.  Admittedly, I am the kind of Jewish mother who would have strained the air with chicken soup, but honestly?  What’s the point. Where are they going that requires them to be there right now! And by scooter.  Children are not the only issue. People in wheel chairs and who use a walker can be equally treacherous. There is no courtesy driving where they are concerned.  Now admittedly, some have never driven a car on a narrow suburban street where one car has to wait while the other passes by.  But why is it that when you are minding you own business just trying to walk on the sidewalk, you are risking your life.  Do you know that if you want to kill someone the best way to do it is to run them over with a car in NYC. Hand to God.  If a pedestrian gets hit by a car, it is the pedestrian’s fault.

What is there to do. What is the alternative?  I guess you need to arm yourself with something on wheels. But please, before you do, buy a helmut, some sturdy wrist guards,  and knee pads. We’re just sayin’…. Iris