Another Summit, Another Show

Every day you can find ways in which the world has changed. Not that you really needed to be reminded of it (home-style espresso machines, laser printers, Prius hybrid cars), but this morning watching the so called ‘coverage’ from the G-20 in London, I realized that how lucky I have been to have been a photographer in the last few decades. If the 70s, 80s and 90s were the time of the modern still photograph, then today is the elemental time of the internet and really bad video. Large scene, overall camera shots of the huge crowds of kids (sorry, most of them are kids) who are protesting the G-20 and the US role in the economic downfall. In the show I’m ‘monitoring’ now (‘monitoring’ is what fake anchors do when they don’t have anything interesting to say) there are background shots of the yellow coated bobbies, and the the crowds of protestors, bound together with a huge contingent of press photographers. Most are using still cameras, some seem to be schlepping a video camera too, but as I look at this scene, I wonder “where in the hell do they think their pictures will end up?” In Denver and St. Paul last summer, at the political conventions, there were a couple of great blogs which followed the protests, and did so with a very hip and interesting use of video and pictures. But in the world of the ‘net, where no one really takes seriously the concept of honoring copyright -- you pretty much just grab what you want from another site, and put it on your own site. No body, with the exception of a few big sites, really pays for anything. You can just link to someone else’s page, and if you are an aggregator (ever notice how similar that is to ‘aggravate’?) you just post it like Drudge does, and then don’t bother actually responding to your emails when someone like me gets pissed off about it. It’s kind of a content driven mess. The value of the content seems to be far less appreciated than in times when you actually had to make a decision to see something: you bought a copy of LIFE or TIME or Newsweek. There was no internet to gobble up our work and spit it back out a hundred ways. The value was that you could slow down long enough and actually look at something with a sense of pondering and thoughtfulness.

At the first US/Soviet summit of the Reagan / Gorbachev era, in Geneva in November, 1985 (and no, I can’t actually BELIEVE its 24 years) I was one of the stills guys present. We were few enough that you could put us on the head of large pin. Kennerly, Dirck, Diana Walker, Ficara, the usual run of magazine folks, and the wires. We were less than 15 from the US side, I believe. A large handful. On the Russian (oops, Soviet) side, there were a bunch of former rugby players with wide lapelled suits and Nikon’s with potato masher flash units. In those days, and I suspect that even now at the G-20, there were protocols which supposedly allowed the same number of Stills guys from each country. That meant that at a G-7 finance summit, Italy had the same number of credentials as the US. Given that all the ‘regulars’ lined up out the door of the White House press office were way ahead of me in the food chain to get the little twits’ approval, I had to find other methods. I became friendly with the Italian press service, since most Italian press photographers were smart enough to be elsewhere photographing beautiful actresses or car crashes on the Auto strada, instead of struggling to get a picture of their Premier who, because of the iffy political system, would be out of office in a week or two. I nailed my creds from the Italians, and would take my place in the grid – that big mess which we have come to call a photo-op.

In Geneva, I still remember spending a bone-chilling 8 hour day on an outdoor platform with Diana Walker (TIME) waiting for the Reagans to arrive at the big guest house. It took hours and hours, and the only thing which assuaged our discomfort was the discovery that someone had put what amounted to a free international phone line on the stand. We amused ourselves by calling virtually everyone we knew in a number of countries to say hello. In the end, the Reagans arrived late that day, the light sucked, and there was no picture to speak of. But in the spirit of Skype, we’d at least been able to keep up with all our pals and family. The next two days saw plenary sessions, and we all searched for that one special picture – hard to find in a world where protocol determines with razor like accuracy who stands where, and when, and how.

On the last afternoon, the joint session was another ticketed event. I was twelfth in line for a US group with ten tickets. So I went to the Soviet press desk, and played the “My great-grandfather left Russia 100 years ago, do you think you could toss me a cred?” card. The apparatchik with the paperwork looked at me with disdain and said “Impossible. You should talk to the Americans.” I reminded him that they were not a possibility, but that I was ready to wait and see. “You must be patient!” he said. “I am patient!” I responded. And for once, I was. Writers came and went, leaving with their creds, as the clock kept creeping up to the appointed time. After about twenty minutes, realizing he still had a stack of creds, he looked at me and announced “You are very patient..” and by the time he had finished his sentence I had one foot in the big hall where they were set up for the joint statement. Then the real work began. My first view of the stage showed the four chairs arranged in a long line (two heads of state, two interpreters), splayed out over the stage. In a quick moment I asked the ‘Service if we could run up and get a light reading (i.e. there was still this thing called “FILM” which had to be correctly exposed.) As we stood there comparing readings, and unbeknownst to the protocol stiffs at the side of the room, we started utzing the chairs together ever so gently. In the end, it was a right and proper thing to do. I mean we HAD to get the chairs close enough that you could make the shot with a 300! Some things just are worth making happen. 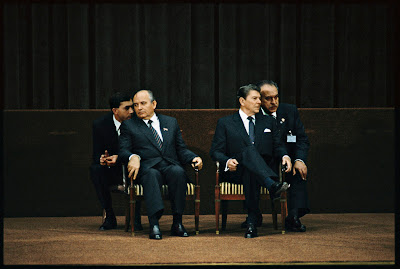 Reagan and Gorbachev, their interpreters, in chairs pushed just close enough for a 300. This was shot with a 200.
Now, looking from afar at the G20, where there are a helluva lot more photographers, and a helluva lot fewer chances to make a picture, I wonder how the movement of media and imagery will change again. The fleeting moments of the Obamas and the Queen, the long ranks of world leaders, might produce a picture or two, but who will take the time to look? Will those pictures just be blown off the front page by Madonna in Malawi and rankerous discussions about Subway fare hikes? Who will see, who will notice, who will understand? We’re just sayin’…. David
Posted by Iris&David at 8:58 AM

Nicely written, and yes, Granville Withers was on the stand when Reagan walked from the entrance and greeted Gorby.

Nicely written, and yes, Granville Withers was on the stand when Reagan walked from the entrance and greeted Gorby.

If you go back and check, you'll see that Granville Withers, in that blue double knit checkered coat he was famous for, often turned up in the right place at the right time. And usually the right 1/125 th of a second. And especially, at the right angle. All I can tell you is that when you have enough people, inspired as they are by the likes of Monsieur Withers, you can move about any large protocol laden chair out there, that needs a little shove. DB