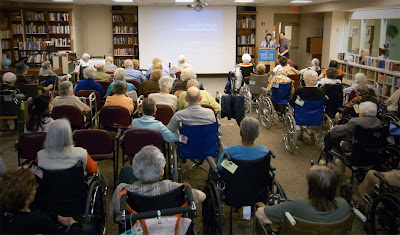 When I agreed to show “The Gefilte Fish Chronicles” at the Hebrew Home in Riverdale, I asked for assurances that there would be more than five people in the audience. Having done my share of afternoon movies, (where there is always a plethora of the elderly), it has become apparent that, if there are less than 50 people in the audience, the tendency to talk during the film increases by 75%. In addition, the last time we showed the film at an assisted living facility, my cousin Dickie and I were the only ones who understood the show wasn’t interactive. And it didn’t matter how they made their gefilte fish 100 years ago – this was about our little ‘gefiltes’.

Judy was convinced that they would have a full house, so we said OK. The show was called for 2:00. At 1:20 there were maybe six people there. I thought that it was a good sign that an hour before the show there was already an interest. By 1:45, the place was packed. Half the room was populated with wheel chairs and the other half was walkers and folks who didn’t need any help. We were surprised and pleased – but waiting to see what kind of an audience they would be.

The lights dimmed and the music began. We were in the back and couldn’t hear much so I asked the aide doubling as sound technician to turn it up. I figured if I couldn’t hear it, any of the residents, who were like my mother and refused to wear hearing aids, wouldn’t be able to hear it either. At one point someone on staff started to test the sound system, which was a bit disruptive, but the person in charge raced to the office and put a stop to that. From the rear of the room I could see some of the people tapping to the Klezmer music – it didn’t matter that they were confined to wheel chairs. Then, when the onscreen Seder began, I could hear a few people saying the blessings with people on the screen. At the end, when the credits roll to the song “Oifen Pripichick”, (just in case you want to hear something beautiful,then check this out) they were singing along like it was “Merrily We Roll Along” – but much more poignant. 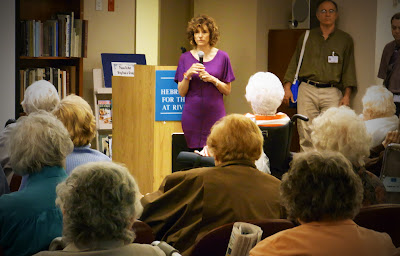 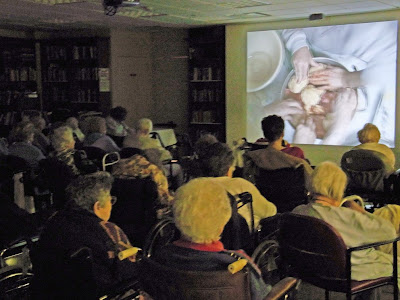 After the credits rolled I went to the lectern to give some background and answer questions. David was sure half the audience was asleep. This was not the case. The entire front row (people who could both hear and see) were in tears. Let me just share with you that no matter how many times I have seen it, I am always in tears by the end, because Aunt Peppy reveals that Aunt Sophie has died. So when I got to front and saw that all these other people were in tears, I lost it. When David came up to share his insights, he mentioned Dumont Avenue, and one woman in middle of the room yelled, “I grew up on Dumont Avenue” – she was wiping her eyes. “It brought so many wonderful memories back to me”, she said through her tears. There was also a woman in a wheel chair who asked if we would adopt her because she wanted to have a Passover like ours. 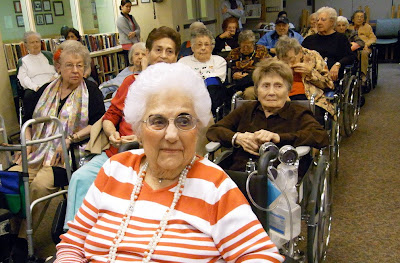 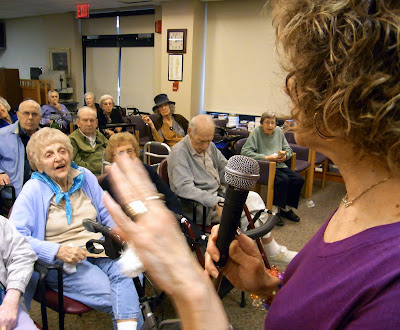 Needless to say, it was well received by all. And, needless to say, I knew that Bubby, Zaidy my Pop an all my sorely missed Aunts and Uncles were looking down at us and saying, “Look at what a ‘Mitvah’ the children did. We certainly taught them well, didn’t we?” We're just sayin'.... Iris 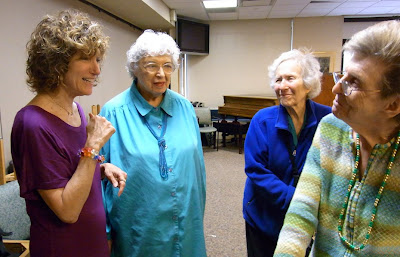 hi guys...It's always a treat to hear that "Gefiltefish Chronicles" lives on and the big part that it plays in the lives of, well, Jews and wannabes (not that I feel incomplete because I'm not a Jew but I do envy the sense of community, as chaotic as it can be). Pass the salt.

Dickie.. the amazing thing i see everytime we play it is how YOU, the iowa farm boy, managed to nail down the narrative so quickly (hey, we only came for three lunches before we knew we 'had' something).. quite amazing in itself..thanks so much .. go read the comments on GFC.com if you havent lately.. theyre something...

Iris... They did teach you well.