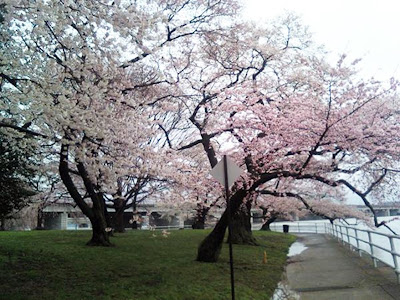 With us it’s pretty much all or nothing. We don’t blob for days and the BAM! we can’t stop writing. Yesterday was one of those bleak foggy days in Washington. It was also the beginning of the Cherry Blossom Festival – which we didn’t know until we got downtown and saw all the pink signs encouraging people to come, but in classic DC thinking, not allowing people to park anywhere. The good news was that it was drizzling—so there weren’t a billion people wandering aimlessly looking for a place to put their cars. The bad news was that it had rained so all the blossoms that had bloomed were lying lifelessly in their previous pinkness on the ground. It was a bit sad, but we were determined to find the beauty that remained.

We fooled those DC cops and found a way around the prohibitions and parked, where we usually do, near the Jefferson Memorial. Because there was limited parking for cars, people were encouraged to take buses so there were lots of people coming off buses and heading directly for the tidal basin. We decided to go toward the George Mason Memorial (one of our favorites) and found that there were some lovely magnolia trees surrounded by bright yellow bushes (I used to know the name but who cares what they are called. They were a ray of sunshine in an otherwise gray day,) 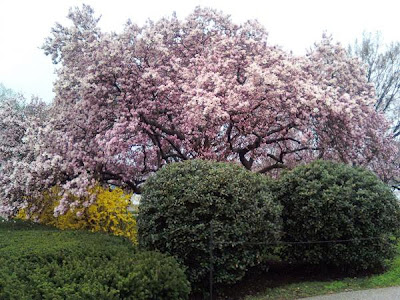 We have been going to the Tidal Basin to see the blossoms for a long as I can remember. When Jordan was little she would invite her friend Mellie to sleep over and about 6am we would wake the girls, wrap them in blankets, and deliver them to the trees. When Eugenia came to live with us as an exchange student from Russia, we insisted she get up. And when Edwige lived with us, we insisted that she not miss it. We figured it was as close to doing something tourist-like that we would ever get. Anyway, we would walk around the circle of cherry trees, usually shivering, and we would pause every once in a while so David could take pictures of us, the trees, or strangers taking pictures of one another. We never brought coffee and Croissants, which so many do. And we never picnicked while viewing the scene. It was simply too early to eat or drink anything and the girls, cooperative as they were, usually just wanted to go back to bed.

But yesterday was nice. Sure we were alone – that was too bad. But it was fun for me to watch David figure out what he wanted to shoot. And I took some pictures with my phone, which I never do. It was unusually serene where we walked uninterrupted by the throngs of bloom seekers. And despite the fact that so many petals were wet and struggling to survive, there were still a number of trees just at the peak of their beauty. 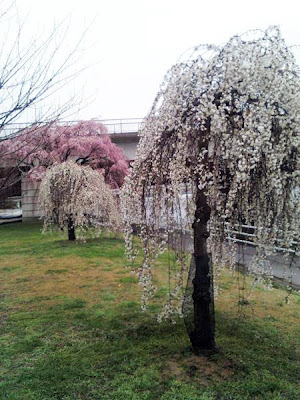 As is usually the case, we didn’t stay too long. But we opted for quality rather than quantity. And the wonderful thing about the cherry blossoms is that they, unlike us, never get old. We’re just sayin…Iris (including the pictures)
Posted by Iris&David at 9:10 AM

The bright yellow bush is "forsythia."