The Joy of Hocking

Does the Gefilte fish? Is the Gefilte related to the tuna? When you ’hock’ (like chopping but you do it for 20 hours – if you chopped for that long your hands would fall off). Anyway, when you hock a Gefilte, does it go to heaven, or does it taste like heaven, or is this a totally ridiculous discussion. Yes to all of the above, or the preceding or whatever. 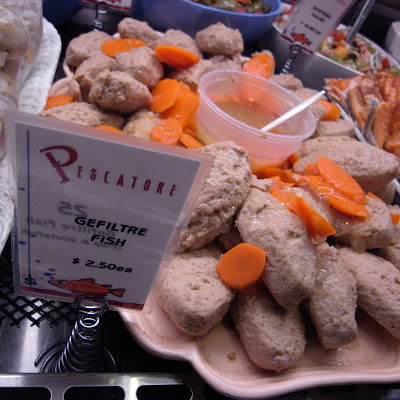 the high-end stuff
I have often wondered how we would measure the value of the work we do to prepare for Passover. As if by magic I got a partial answer when walking through the market at Grand Central Station. There we were sauntering by the fish monger when I noticed a large platter of perfectly oval gefilte fish. No hand made gefilte is ever perfect so we knew immediately that each was shaped by machine. My guess was that these guys went to Costco or Sam’s Club and bought a couple of giant cans, opened them, plated the fish avec carrot, and decided to charge $2.50 a piece. It is possible that we could sell the fish we made for $3.00. 3 X 70 is $210.00. That’s pretty good. Then we could charge maybe $2 for each matzoh ball – unless they are stuffed with grebines (onions sauteed in chicken fat until crisp). Then we could get as much as $2.50. And if we charged for chicken by the piece we might get $3.00 for dark meat and $4.00 for white. And what about the matzoh farfel muffins? Chicken soup should go for $5.00 a bowl because it’s organic and we clean the chickens with a tweezers. They are kind of a delicacy, probably worth at least as much as a designer cupcake, say $3.75. All that seems fair to me, but I am in a bit of a quandary about the black radish, the horse radish – do you charge by the spoonful or the jar. And the cholent (slow cooked beef stew). You can’t charge by the piece of meat because the beef, potato, and stuffing all mush together. You could charge by the serving but it would be much more lucrative to charge by the pound because it’s really heavy. Finally, there are the sponge cakes and brownies—none of which has wheat flour. Now they should be really pricey. Oh my God! We could be almost rich if we went into the “Seder R Us” business. Geez, we could make more than $25.00 for each meal we sell. 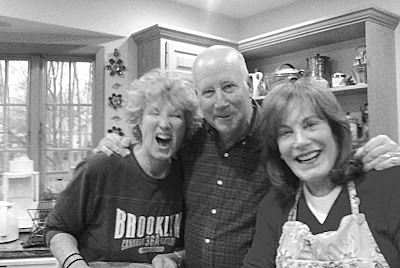 Chuck(c), Karen (r) and unidentified first cousin, at the hock-fest
Not so fast. There are easier ways to make money and part of the joy of creating the Passover experience is that it has nothing to do with money. It is all about being with people you love. It is about arguing without animas, about the important stuff like the amount of seasoning to use, (there’s never enough salt), how much chicken fat is enough (none is too much). And the length of time to cook something (does it really take 3 hours for the gefilte fish to get done). Oh and realizing that hocking’ 35 pounds of pike and carp, can be more fun than a carnival. Of course, I hate to go to a carnival, but it always sounds like something that would be colorful. 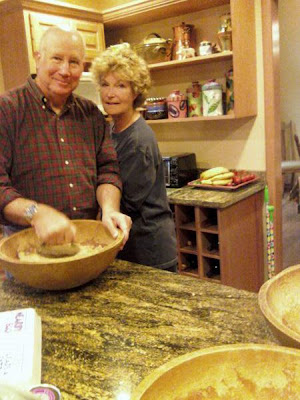 Chuck and Honey, and the late carp
And, I don’t mean to sound like a commercial but how do you put a price on all the wonderful conversations that you have while you are hocking, or mushing, or baking. You can’t charge by the story or laugh or by the tears you shed when you remember the time that has passed or the people you have lost. Anyway, it is impossible to measure all of that and put it on a menu with a price. I guess another great business idea bites the dust. 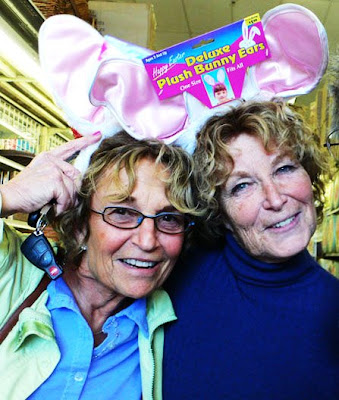 Rosalie and Honey, being serious
This Passover is the first time the first generation cousins prepared without supervision from the Aunts. It wasn’t easy, and we actually haven’t feasted on the results of our efforts but we are confident that it will all be just terrific. Because even if the horse radish isn’t strong enough and the chicken is dry (neither of which will be true), the joy we had all just being together have already made this holiday a success. We’re just sayin’…Iris
fone-cam pictures by Iris
Posted by Iris&David at 11:18 PM

Iris, Steve gave me a heads up about the documentary airing, so I just watched it for the first time last night.

It is so wonderfully hilarious and poignant -- and it made me want your family to adopt me. Really. (Lots of parallels between Jewish and Chinese families, believe me.)

Congratulations on your maiden voyage this year -- hope to hear more about it...

Grebines? For a goy, I usually do pretty well on this sort of thing, but I've never heard of that. Onions crisped in schmaltz? As Homer Simpson would say, "Chicken fat, unngghhhhhhh."

BTW, how do you pronounce it?

Thanks for your loving comments... come to seder next year. We can always make room and we can teach everyone how to pronounce every taste