You know how when you watch ER (and of course you must—or you watch any of the Law and Order’s which is great, but has nothing to do with this blog), there are often these intimidating medical machines. Maybe it’s not ‘ER’, maybe it’s “Gray’s Anatomy”, it doesn’t matter, as long as you have seen an intimidating machine like an MRI. So today I had an MRI because I had a fall a few months ago and hit my head. Other than yelling “I am bleeding from my head”, I did nothing. But since Natasha Richardson died from not having the proper medical attention, I decided that the unusually frequent headaches and memory loss might deserve some attention. 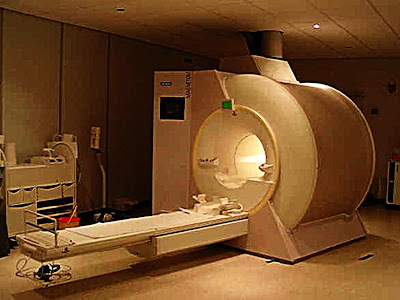 It’s not easy to navigate the health care system anywhere. First you have to find a doctor that takes your health insurance. Then you have to find a hospital or some equally large facility that performs an MRI. Then you make an appointment. That is just the beginning. Next you have to call the insurance company and give them all kinds of information like the name of your doctor, the codes for your illness, and a prescription for the test. Then they refer you to a place that gives you an authorization number and all kinds of rules. [Who would have thought a zillion dollar industry could exist merely from OK’ing medical procedures?!) It takes hours and many phone calls. Then you have to contact the MRI people with all the data and hope that they can give you an appointment while you are still alive.

This being said, I am quite fortunate because my pal is a humma’ at the Hospital for Special Surgery and even though there aren’t many bones in my brain, she does know every fine doctor and facility in NY. They were able to make an appointment for me and, when I arrived, there was a welcoming committee. That’s a slight exaggeration but they couldn’t have been more welcoming. I guess I should mention that initially I went to the wrong facility, but I had arrived early enough to figure out that I didn’t belong there, so I was able to scoot across town in enough time that I wasn’t very late.

Back to the intimidating part. They take me into a room where I am to remove any metal, including jewelry and an under wire bra. I hoped that my shirt and the label had no metal thread and wondered if I would suffer severe burns if they did. But the nurse thought it would be OK. Then they take you to another room where they search for a vein in order to inject the dye that does contrast. I have no veins. I mean for years nurses and doctors have been looking for my veins and when they find one and try to stick a needle in it—it collapses. Inevitably, they try two or three times and then they stick it in my hand. The good news is that I could never be a successful drug addict. It would simply take too long to inject anything and get high.

Once you have the tubes hanging from your hand, they take you to a room which contains only the MRI machine. It is a massive structure, a big enough machine that it dwarfs every room. “Are you claustrophobic?” they ask. And if you weren’t before, the sight of what they are going to put you in is enough to make you think you might be. “The machine makes a great deal of noise” they say. “You might want to wear ear plugs.” I always want to wear ear plugs when there is any noise but, like my veins, my ear canals are a problem. They are so small that I can’t wear ear buds or most plugs. When I use my I-pod, I do it with these giant ear phones that look like a Mickey Mouse hat or like I’m from another planet. Quite simply, it’s embarrassing to be with me. Even at my fitness club people won’t use the machine next to me.

“There’s a fan in the machine and it gets a bit chilly. Would you like a blanket?” the technician asked. “Sure” I said. But what I really wanted was a teddy bear and my mother. I put my head in the “head putting place” and struggled to put the foam plugs in my ears, but within minutes, they fell out. So there I am on the table, prostrate and plugless and hoping it just won’t take too long.

The noises started and they were incredibly loud. It took me back to a time when my photo friend Peter was shooting a story about the “Plasmatics”. He invited me to go with him to hear this nasty punk rock band, and then we planned to have dinner afterward. When the show was over and Peter came off the stage he was holding his head. “The worst thing happened”, he said. “I put the plugs in my ears and as soon as they started to sing the plugs fell out and I stepped on them”. It was hours, maybe even days, before he could hear anything. Anyway, this was not much different. At some point the technician asked me if I was OK, and I was just relieved that I could still hear him.

When the test was over I got dressed and made my way to the nurses office so they could take all the crap out of my veins. She asked me if I felt OK. And I did, other than having some hearing loss and a punctured vein in my hand. Only kidding, I was just fine. At least I hope I am just fine. The good news is that they discovered I do have a brain and there is no tumor, aneurism or bleeding. I refuse to acknowledge any bad news. There simply won’t be. Let’s just say that there may be other news sometime down the road. Where is George Clooney when you need him? We’re just sayin’….Iris
Posted by Iris&David at 9:40 PM