Originally, I was going to talk about the passing of Bea Arthur, and I’ll get to that. But first I want to rant about two recent events. The first is “the possibility of a world pandemic.” David says the difference between a pandemic and an epidemic is that the pandemic can’t be controlled. But remember a few years ago when there was a flu epidemic and no vaccine available? There was certainly no control. There was a great deal of sneezing, fever, vomiting and wheezing, but no control. 150 people have died in Mexico from the flu – how many have died from dysentery or some equally unsettling virus. Twenty eight students at one school in NY are symptomatic and have tested positive for the swine flu – but they haven’t died or even been seriously ill. It seems to me that the whoopla is because the World Health Organization in combination with the news media, need to have equally unimportant and bordering on the ridiculous, topics to discuss. Use your hankie. And talk about ridiculous, the Orthodox Jews and Muslims are offended by the name ‘swine’. Although I don’t think anyone asked them to eat the disease, they want it renamed the Mexican flu – (which makes no sense at all despite it’s killing 200, [I increased the number because I assume it’s growing], it does give them something other than the Palestinian problem to whine about. If we really want something to worry about, let’s talk about the pandemic of poverty, breast cancer and violence against women—which will surely kill more people around the world than this flu.

Yesterday a 747 flew over New York City. It was trailed by an F16 fighter jet. For thousands of people in lower Manhattan and Jersey City, the scene was reminiscent of the World Trade Tower terrorist attack. Reports are that neither the Mayors office, nor the police knew anything about it. OH NO! The plane was, if not sent by the White House Military Office, at least explained by them pretty much in this way; “I’m sorry, but we needed a photo op of the plane.” We need a little Obama “the buck stops here” action. Someone needs to lose their job. If not Mr. Caldera from the White House Military Office, then someone from the Pentagon or the FAA. It doesn’t really matter, but someone, with incredibly bad judgment, or no judgment, is still making decisions. And why should that be? Not only that, but they were going to repeat the performance (photo op) over Washington next week. That’s been cancelled, but what kind of idiot would have scheduled it in the first place? And yes, Mr. And Ms. Taxpayer, not only did you underwrite the NY event, you continue to pay the salary of some White House (or Pentagon) dimwit. 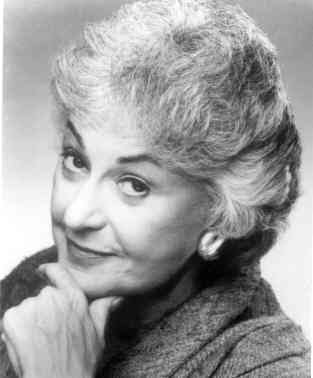 Enough stories about pathetic behavior. On a sadder note…. When I heard the news that Bea Arthur had gone to what we all hope is a better place (Florida?), I felt that I had lost a friend. Remembering. Yes, I was a fan of everything she did. I hardly ever missed a “Maude” and there is not a day that goes by that I don’t see at least one episode of “The Golden Girls”. This is not an exaggeration. The show is on the Hallmark Channel a few times a day and, whether I’m on my treadmill, (which is dangerous because I laugh so hard), or unable to fall asleep in the early hours of the morning, I make it a point to be there for at least one viewing. The beauty of the show is that no matter how many times you see the same show, you can still enjoy it. After a while you start to quote memorable lines and make them part of the way you live your life. And yes, I was amazed and inspired by the scope and breadth of all her work. If, at age 80 or so, she could be out there on the road doing a one-woman show, certainly I could try to keep up with whatever the small project I was attempting to complete.

In a way I felt like I knew her because a few years ago I had the good fortune of being seated next to Bea on a flight across the country. We introduced ourselves immediately – she was delightful and not at all reluctant to make conversation with a stranger (and I can be strange beyond words). She was carrying pile of movie magazines, and I was reading the “New York Observer”. She was fascinated by the satirical paper and I was dying to read the dirt about the celebs, so we traded reading material. We gabbed about political issues, the business (TV and movies), and Herb Edelman, a dear friend of ours who played her husband on “The Golden Girls.” She was generous with her business wisdom and she was just plain fun. We laughed for six hours, traded contact info and parted at the airport. I never called her because I felt it would be an intrusion, and she never called me because I was just an entertainment corporate dweeb, to whom she was kind. But for those few hours I don’t doubt she had as good a time as I. And it was a trip in which we both felt we had made a good, if only momentary, friend. So, I’ll miss you my friend, but at least I can tune you in six times a day. We’re just sayin’…. Iris
Posted by Iris&David at 4:29 PM

Iris that was a great story about Bea. Was such a delight to read she was just approachable with no airs or graces

This whole pig flu thing drives me crazy. 800 people die every week from NORMAL flu! Maybe we should start a sanitation and good behavior campaign, good 'ol communist style - the seven NOs campaign: no spitting, no jaywalking, no cursing, no destruction of greenery, no vandalism, no littering and no smoking.

Too true, I was delighted to know that she was a real person with a wonderful sense of humor. With regard to the flu, Here's a note I got today. "It was once said that a black man would be president when pigs fly.
Indeed 100 days into Obama’s presidency, SWINE FLU !!!"

And finally, The saddest thing is that no one has yet to be fired.