Last week was Zach’s second birthday. While we don’t see him as often as we would like, we did spend the afternoon with him for the celebration. He is an incredibly wise little boy. He knows exactly how to get around almost any issue. He has figured out who to ask for anything he wants, and who he should avoid because they are on to him. Parents always try to do the right thing. Grandparents, who adore without reservation, are easy targets. Chances of us saying no to a request, are little or none. It’s not in our job description. Zach, being a child of the 21st century, has more grandparents than most of the people with whom I grew up. We had two sets, mother’s parents (Zaide and Bubbe) and father’s parents (Mr. And Mrs Schultz – just kidding). Zach has six. While this may present complications for the grandparents, it can only be heaven for the child. His loving maternal grandma (Nana), takes care of him while his parents are at work. His maternal grandfather (Papa), is retired and is mostly around during the day. (A fabulous guy who can’t resist slipping Zach a marshmellow upon request), His fraternal grandparents include Grammie, Papa, Poppie, and Mimi (a name I took from my friend Joyce, who decided upon it because, she said “Well it’s really all about Me isn’t it?”), I simply thought ‘m’ sounds were easy and I would be acknowledged early on. What I have learned is that nowadays, you can’t have too many grandparents. The more you have, the less likely you are to be refused even the silliest of requests – like providing M&M’s upon request or rolling down a steep hill in the rain. 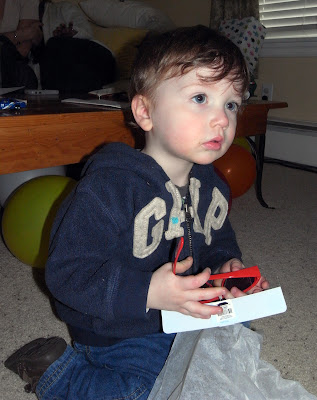 The party started with a great deal of playing and transitioned into a great deal of cake eating (Zach like Leo, is a very neat eater), and ultimately the opening of a great many gifts. 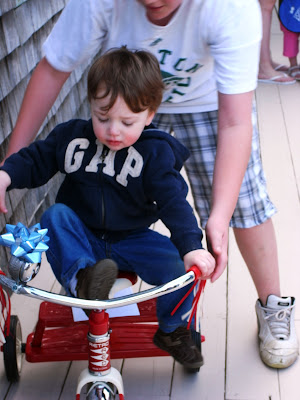 It was hysterical to watch all his little cousins deciding which gifts to open and then plunge into the ripping and tearing of all the beautifully wrapped presents. Needless to say, we had a wonderful time and wish it could happen more frequently. 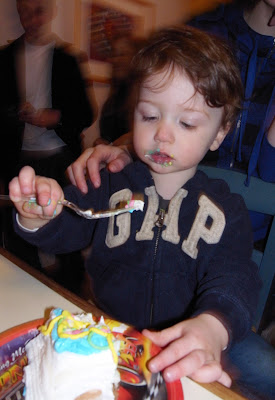 Before we went to the party we stopped by at Seth and Joyce’s house. I figured maybe we could have a little alone time before the birthday extravaganza. Zach was still asleep but when I went to look at him before (he sleeps just like Seth did with his backside in the air) he got up. My presence was a bit disconcerting – he expected Mom or Dad, but he didn’t scream, he just managed the two-tear, ‘get my daddy’ look. It took no time and he got comfortable with us. 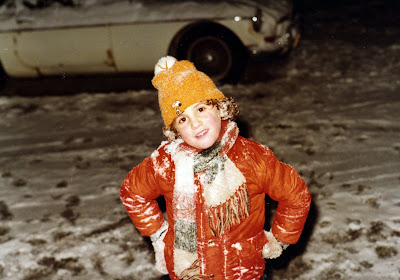 Seth, at age 4
Seth carried him down the stairs and when they reached the bottom, Zach was quite insistent that Seth put the gate up on the stairs. It seems that he had a bit of a tumble a few days before.


When Seth was little we lived in places with very steep staircases. In one house they were only somewhat steep, but in the other they were uncarpeted and so scary, that our soft - coated wheaten puppy would just sit at the top of the stairs and cry. 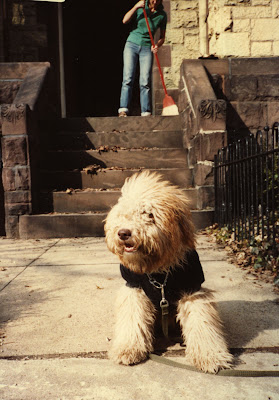 Earnest, after his trip to the Supreme Court
We resolved his fear by taking Earnest, not Seth, to the Supreme Court building and teaching him how to go up and down the steps in the front, which were about 6” steep. Anyway, when Seth was very small I taught him how to meet the stair challenge by using the “Dubroff” method of going down the stairs, which was to turn around and go down backwards on his tummy. My cousins taught their children to do this and had visions of the girls as teenagers, getting picked up for a date and turning around to go down the steps to meet their boy friends. (I don’t think that ever happened but who knows). Let me say that parents are much more terrified about a child falling than the child usually is, but when you have a fearless kid – they are bound to have some kind of a fall. And he is fearless. It seems he took a header down a couple of stairs and he is now reticent about having to get from top to bottom. The result is that he smartly insists you put the gate up on any stairs that maybe encountered, because he doesn’t want anyone to be in danger. 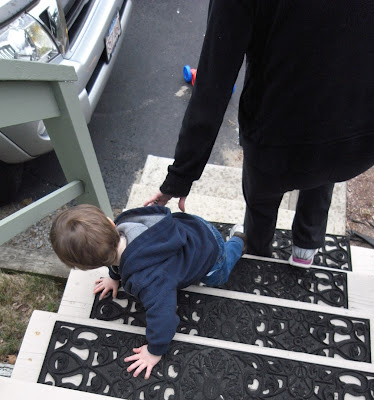 Reverse, mode
He is fine, by the way, and did not suffer any injuries from the accident. Anyway, I bring all this up just to say that yes, he does know my name (Mimi—I was right about those M sounds), he may not know that I’m his grandmother, but he knows I’m a pushover. He is a divine child, and because he is so smart, in a remarkably short time, I was able teach him how to turn around and go down the stairs backwards which, if it didn’t make him feel more secure—it made me feel like I had participated in an extremely important event in his life. And isn’t that what it’s all about. We’re just sayin’..... Iris 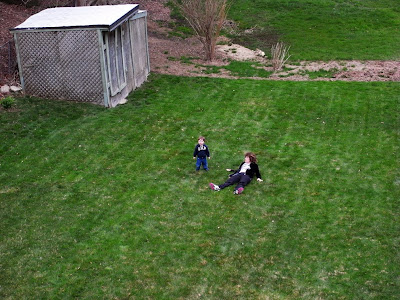