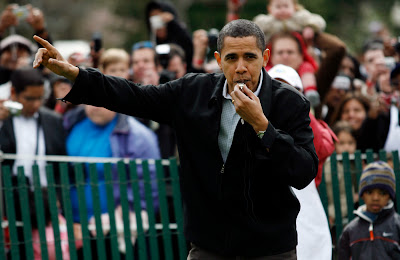 Where did the President go for Easter services, but more importantly, what kind of puppy will become the First Dog? Both those questions were answered and discussed, ad nauseum on oh so many cable news show a few days ago. In case you are dead or don’t have access to any form of media, the dog is a Portuguese Water dog given to the Obamas as a gift from Teddy Kennedy. And the church where they celebrated Easter services was St. John’s – right across the parking lot from the Casa Blanca. No one was surprised because it was right across the parking lot. Close enough to make sense.

This decision, however was convenient and safe. The real question the media is asking, is what church will they choose to be ‘their’ church. The one that makes them part of the Washington community. Gotta be honest, why would anyone want to be a part of the Washington community. No matter which way they decide (black church white church, puddin’ and pie church) they will offend someone. So, if you are one of the Presidential deciders (I prefer that to advisors, because guaranteed, the President does not dabble in drivel, he asks someone to make these decisions, rather than advise and give him reasons for the decisions.) 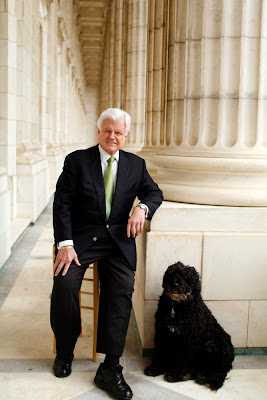 Ted Kennedy with "Bo"s uncle
These two items were less than important on the Presidential priority list but the media has to fill space so there needs to be something to speculate about, no matter how trivial. I believe Newt Gingrich called it a silly topic and on this as opposed to any other topic, I would agree. There were other more important areas of concern—like the Somali pirates and how to free the Captain. Which was done by Navy Seals. Bob Kerrey was a Navy Seal, perhaps that’s really the reason why the New School faculty doesn’t like him. Americans always want it both ways. They want military men to be heroes, but they hate the idea of weapons, war and violence. Today we are celebrating the heroism of the Captain and the crew—who maintain the pirates never took the ship—but what if we had to go to war with Somalia? Never mind—we could just bomb the crap out of Somalia and it wouldn’t make even a little difference to most Americans. Are all pirates Somali or are all Somalis pirates? What’s the difference—we won that contest. I know that because I saw the crew holding up an index finger and yelling “we’re number one!”

OK, so all those problems are solved but here’s an issue that has changed the way I look at the world. I mean major! Yesterday I went to the Easter Parade on Fifth Avenue. I love a parade and will go to great lengths to be a spectator. I have been to the Pakistani parade, the Ass parade, the Indian parade, the parade for Gay Pride, the Thanksgiving Day parade, and most recently the Scotch Tartan parade – for the country not the drink. Although, there were a great many Scotch (Scottish?) people in the parade drinking beer, playing bagpipes, and singing Amazing Grace (which you only do at funerals or in a drunken stupor).

Admittedly, I have never been to the Easter Day Parade. I have watched the Fred Astaire Judy Garland movie “Easter Parade” about 100 times and when Peter Lawford dons his hat and walks down 5th Avenue, my heart does skip a beat. I don’t know what I expected. I guess I thought it would be an actual parade where beautiful people filled the street wearing elegant outfits and extraordinary hats. This was not the case. The Avenue was filled with people. However, for every fifty people there was one person decked out in Easter finery. The rest of the crowd was in jeans and heavy jackets. And people don’t march in an orderly manner from 47th to 57th Street. They mill, or saunter in nothing that resembles a parade. I was very disappointed. I yearned for Fred and Judy and a simple song or two—but to no avail. 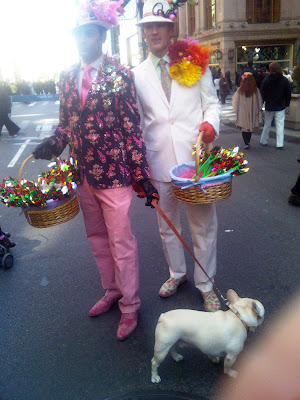 (photo: Iris B.)
The tradition of the Easter Parade la la la began in New York in the 1800’s when rich people would go to church and then ‘parade’ on 5th Avenue in their spring finery. Poor people would gather to watch these folks rich showing off. It was a fashion show before there was fashion week. But it is told that some of the most talented of the lower class seamstresses would copy the fashions for their clients. How awful. Poor stealing from rich. But isn't it delicious when you think that Easter was actually a time when Jesus rose from his grave, and poor people celebrated by stealing from the rich. Now I understand why we say “Happy Easter.” We’re just sayin’...Iris
Posted by Iris&David at 10:19 PM

I gotta tell you, when I saw the outfits on those two guys (thank you for making an effort!) I wanted to see an Easter bonnet on that French bulldog in the worst way! The picture still gave me a giggle.

I simply yearned for even an attempt at a parade-- but it was not to be. A hat on the bulldog would have been fabulous!

Where did you get that photo of Ted kennedy and his dog? I'd like to use it in a video I'm making. Thanks

mikezk said...
This comment has been removed by the author.
5:04 PM