Frank at the National

Im back in DC for a couple of days and finally got to visit the Robert Frank exhibition of photographs at the National Gallery. Frank, now in his 80s, was a young immigrant from Switzerland, who, empowered by a Guggenheim grant to travel and take pictures, spent two years roaming the country and produced “The Americans,” a book which hip-checked modern photojournalism into a new era. His pictures, unlike the cookie cutter “isn’t that nice!” which so much of journalism had been (and a reason that much of his work was never published in magazines) had a raw, unfinished, quality to to. Elegant at times, messy at others, but full of a lot of wonderful found moments. Well, they were found as long as you always bothered to look out your hotel window, or climb a building to see the sidewalks from an elevated point of view. Much of the charm of his pictures is the seemingly random quality of the kind of things he observed (you wouldn’t say he “covered” events like we often do now... he really just observed as he meandered.) We photographers all wish we could get someone to just pay us to wander and shoot great pictures. 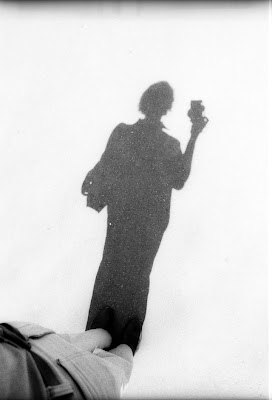 David and his shadow, Israel, 1972
I don’t know anyone who doesn’t. But as there are more and more photographers, it becomes more difficult to become one of those lucky ones who succeed. Looking through some of the source material of the show (and it’s quite well researched with glass cases of contact sheets and work prints, as well as final ‘show’ prints) I was struck again by the pace of life in the 1950s. There are copies of letters written by Frank to his first wife (included in a small one-of book of pictures), letters to and from Walker Evans, one of Frank’s mentors who helped get him the Guggenheim, and a pair of letters from Jack Kerouac, then living here in Orlando 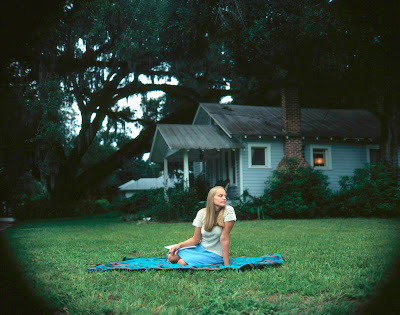 (it’s now called the Jack Kerouac house - and writers live and write here on 3 month grants)
type written with pencilled annotations and many typos, but of life as only a single-copy-produced-by-a-typewriter can be. It’s an actual LETTER. When was the last time you received an real letter. One written in pen or pencil, of which there are no other copies? One that arrived in the mail in an envelope. One that in twenty years, long after all the first twenty years of eMAIL will have died and gone away, living on only as a bad memory, you will still be able to hold in your hand. There is something quite fetching about a letter. It’s as if it remains the quintessential opposite of a “write on your wall” message on FACEBOOK. However charming and artistic a FACEBOOK message might be, though I have seen precious few like that, it’s pretty safe to assume they will have died some kind of cyber death a generation from now. They might exist somewhere on a discarded hard drive in a land fill somewhere, but will you have access to them the say way you might a folio of old ‘letters’ from the good ole days? I think not. Too bad. The paucity of primary source material for future scholars is going to present real problems when future gens want to know what people were really thinking. The inspirational value of prime material is beyond what we can recognize in the immediate moment. I still remember a moment during an 1970 trip to London, wandering through the British Museum, and coming across a vintage copy of The Compleat Angler - by Izaak Walton (first published in 1653) and being mesmerized while reading the two pages it was opened to, under glass, and shaded by small velvet curtains. I immediately went to a book seller on Oxford Street, and made the faux pas of asking for a ‘paper – back’ version, which I later found, only after being hounded out of the book shop by a merchant so dedicated to original works that he felt the only thing he could do with the likes of me was to snarl and snort in a frightful “Damien Omen” way. I got the point. 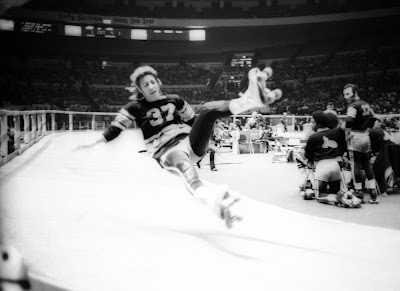 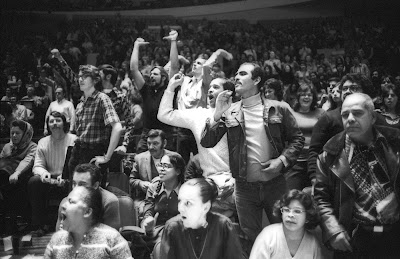 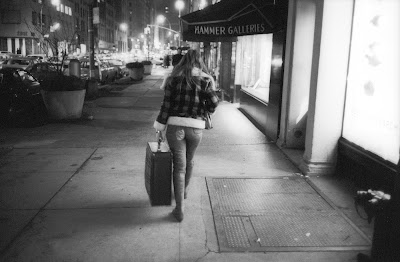 A derby girl heads home at night
I guess the real point is to try and reach back and see what things are made of, and very often it will lead you to what the artist, or sculptor, or even photographer was thinking. Perhaps the most charming discovery for me in the Frank show was looking at his contact sheets (and yes, that IS primary matter!) for it showed me that even on the edge of discovery, Frank was some one not so removed from myself at that age. Of three consecutive rolls of film shot in the same situation (I believe it was New Orleans), there was a roll of Tri-x, a roll of Plus-x and a roll of Ilford HP3. Each had numbers which included 0 and 44 in the middle of the roll which meant that Frank had, like all starving artist photographers of the time, been rolling his own bulk film into cassettes, rather than buying singly packaged (more convenient, but much more $$) film. We’ve all been there: trying to find a dark dark room to load film in (in my case in Salt Lake it was the closet in my sister’s bed room, the only place without windows) for even slow-speed film can be annoyingly subject to light streaming under a door. And those contact sheets, what a treasure they remain. My agency (also called Contact) had a show in China three years ago which was comprised of only contact sheets, blown up to 12 feet x 7 feet, so that each and every photo was large to enough to see as a work – good or bad – all by itself. But it let you follow what was in the photographers head – again, good and bad – and see just how the situation developed. Now, with digital, there are ways of making a ‘digital contact sheet’ out of your images, but somehow, it doesn’t have the same commitment to truth that laying actual film strips down on actual photographic paper does. To luxuriate in finding your older work still in tact, and wonder what ever possessed you to shoot something that way, is something I find more and more attractive, even if the end result is only my own self-indulgence. 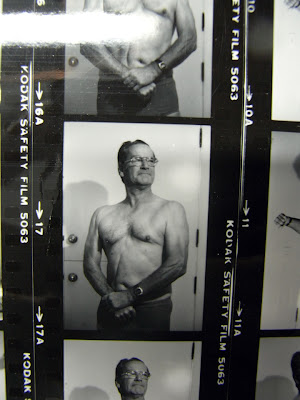 Ted Burnett, my dad, on his 70th birthday
We discover things which we didn’t know at the time. I’m sure Robert Frank has spent many nights looking at his contact sheets trying to see what is meaningful to him now which he might not have seen then. That is the joy of re-discovery. But it means keep that material handy. You can’t go back if you have nothing to go back to. We’re just sayin’...David
Posted by Iris&David at 9:45 PM

Thanks for the indulgence, Dave.
Oh yeah, we all used to write letters, back when we knew where someone lived. These days, everyone is spinning like dervishes to get the work out and keep "the man" at bay. Really liked your post, Frank was my hero. Got to meet him a million years ago when we were young and he was our age. He seemed so tired and sad. Now it doesn’t seem all that tired or sad to me.

Bulk film, who could you tell that to except for a bunch of silverbacks who read this blog looking for memories of their past glory days, priceless stuff. Maybe it's time to break out the glass negatives and head up to Upper Yosemite for a spell.

Re: letters: Love them. Write them. Never receive them. I buy pretty stationery, I write witty prose, I enclose photos of interest. Never get a thing back. I'm in letter withdrawal so badly that when I got a thank you card from my niece for her birthday gift I almost swooned. How can we make people give up the email and pick up a pen?