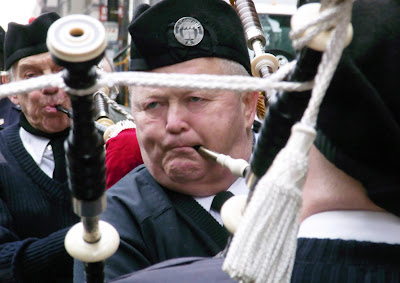 On those rare weeks where I actually spend a week here in the city, I continue to be amazed by all those New Yorky things which carry on, whether or not your attend. In fact, TIME OUT/New York magazine, a swell weekly guide to things going and and things to eat, has a cover story this week called the New Yorkiest Blocks in the city. I don’t live on one like that. Our block, contrary to most in this city, has no palaces of food, no laundry, no nail parlor (all those things are just minutes away, but not ON the block), and just three garages, a late night club where yelling matches and the occasional gun-fire challenge sleep, and a men’s clothing store with nothing I’d wear (not much of an indictment, true) on a fancy dress night. We’re within a two minute walk of Indian, pizza, and that parlour of great confections, Tasti-D lite, that quasi icecreamian stuff which is made from the same thing that keeps your airplane tires inflated. The lack of goodies immediately near by is certainly trumped by the availability of anything in the city to be delivered. You call, give an order, and within twenty five minutes, a host of goodies can be arriving by bicycle at your door. Try and match THAT Denver or Cleveland!

Today, on a little wandering stroll west, we ran into what was the beginning of the Tartan Day parade. Sure, we all know about the St. Patrick’s Day Parade, the Puerto Rican Day Parade, and as chronicled on this blob before, the Indian National Day Parade. Stand near a major avenue long enough and a bunch of people will march by, with either horses, dogs, bag pipes, or some colorful combination thereof. So today, forming on side streets in the low 40s, and marching up to the edge of Central Park, were hundreds of kilt and tartan wearing Scots and Scot-o-philes, including a small cadre of Scottish terriers, some of whom were also clad in the green, red and blue. There was even a group carrying a Caber, a huge, pole like wooden device for which there is actually a throwing competition. 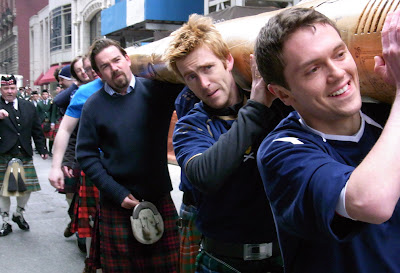 I’m not sure how many times we heard versions of Amazing Grace and that other tune, the name of which escapes me, though the tune itself remains in my head. (It’s something like “we sing the tunes of glory, we tell freedom’s story’..” and if you know I’d appreciate letting ME know…) In any case, you expected to see many tents at the end of the parade for companies as diverse as MacCallan and Glen Fiddich, to name a few. But I guess the vast richness of New York saloons meant they didn’t have to do any individual marketing, assured that in Gotham city, with the exception of the block where I live, you can find a couple of bars at the drop of a hat. And I think many hats were dropped. 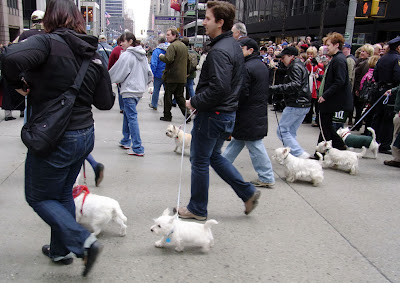 It reminds you that for all the downs and ups lately, there are things which continue to keep people inspired to get out of the house, and go somewhere fun, interesting, or culturally piquing. The city has a lot of those riches, and even if you never spent twenty bucks on a tartan kilt for a 10 pound puppy, you could, with very little effort, be apart of something, somewhere. 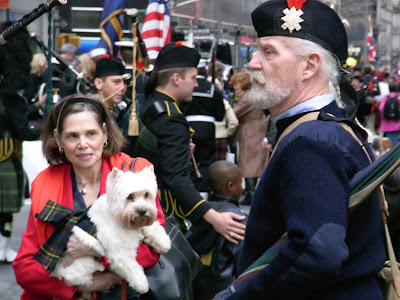 Two nights ago I went with Jordan to an opening at the N Y Public Library, which traced the role of French literary figures through World War 2, the Occupation, and the various positions taken by those people during that challenging period. 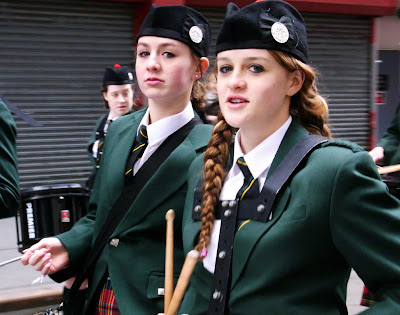 The St. Columbus band from Kilmacolm, Scotland (nice spring break trip, eh?)
There was case after case of original letters (all hand written on actual paper) with a historian’s view on just how the principals related to one another and to the Nazi occupation. Fascinating stuff, worthy of a place so prominent, and one only hopes that there will be enough visitors to amortize the cost of what it took to put it together. The one thing that remains a given, whether you are in the big city, or a rural burg. You have to make an effort. You could stay home and watch TV, and don’t so many of us do that. But the richness of life which is outside one’s own door, whether it be at the library, or a bunch of moustached gents (and ladies) making music on the avenue, is something to keep in mind the next time you’re feeling bored and lonely. We’re just sayin’…David 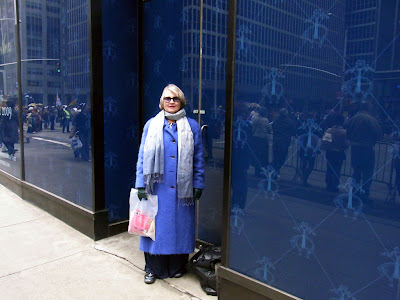 Watching the parade from the sidewalk, so New Yawk
Posted by Iris&David at 7:13 PM

The tune is most likely "Scotland the Brave." By the way, the dogs in the pictures, none wearing a kilt, are West Highland Whites, not Scots Terriers, which are black.

Thanks for the info. Actually, the dogs, none of whom look like the puppies on Black & White Scotch were part of a large contingent of which there were a couple in kilts. IRIS saw them, I didn't, but then she's the fashion maven, even when it comes to puppies. ...David