Word has it that Treasury is not the only Government Department where numerous jobs remain unfilled. Most of the unpeopled positions can be found in what is called “The Plum Book”. Yes, it is a government publication named after a fruit. While the actual name of the tome is “The United States Government Policy and Supporting Positions “, the reality is that it contains a list of all the political positions (about 8000) the President (or his designees ) can fill with their friends. But no one in Washington, or anywhere the jobs exist, has ever called it anything but the “Plum Book.” 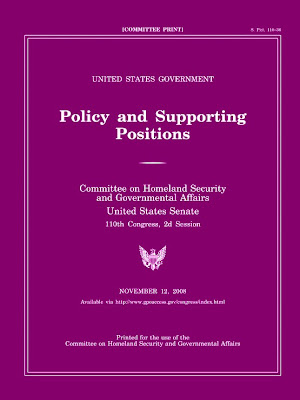 Plums are considered by many, a delectable, kind of oval, purple delight. But not in this case. This plum is desirable, but not always sweet. I can only guess that staffing the government has never been easy. Even when it was first published in 1952, I bet those aspiring Eisenhower administration wannabe’s were tripping over one another trying to find desks and offices in places that would pay them reasonable salaries and give them incredible government benefits-- like health care and pensions. OK not pensions because political appointees can stay for a maximum of eight years – unless they burrow (which means they become civil servants)—but this is too boring. So back to tasting some fruit.

The major difference between filling jobs in 1952 and 2009 is quite simply, the vetting process. In 1952, no potential appointee worried about not paying taxes on a nanny, or a housekeeper or driver – or for that matter, themselves. It just wasn't important. Things are no longer that simple. A friend of mine, who is close to the people doing the vetting, said that when she visited their office, applications of people undergoing the process covered all the desks and were in piles four feet high. Another pal revealed that some applicants had been told to go to lawyers before they filled out their forms, (which could cost $5000 or more depending on their history), just to see if they could make it through the process. Just FYI, the highest salary for someone ( like the Secretary of Defense) is $191,300. Whew, that much!

Are you starting to get the picture. The 2009 staffing process has become quite cumbersome. If you want a job you either gave the candidate a great deal of money, worked in the winning campaign, worked on the Inaugural or Transition, worked in a losing campaign where the loser has been appointed to an important job and cut a deal to make their own appointments (word has it that this is the case with Secretary Clinton), you are or know a VIP, or you have information that you can use to blackmail someone in power (just wanted to see if you were still paying attention). Next you have to be willing to step on anyone who might be competition for a job you want. In addition, you cannot have a past --good or bad -- or you won’t make it through the vetting process. Almost finally, you have to be willing to spend lots of time and money to insure you will have a job that pays about 30% of what you can make in the private sector. Finally you have always to be on your best behavior because if you are caught doing anything questionable, be assured, your supervisor will 'throw you under a bus’.

When someone asks me if I am ‘going in” (which is how Washington people describe getting a government job – yes, like serving a sentence), at first I chuckle, which usually leads to a guffaw, and then all I can think is “why would anyone spend any time or energy to be investigated, scrutinized, humiliated, and made assuredly miserable, for the joy of working in a bureaucracy where, no matter how hard you try, it is impossible to make any difference”. Don’t rush me, I’m having trouble with an answer. We’re just sayin’….Iris
Posted by Iris&David at 9:40 AM

sounds like you'd have to be a nut to want a plum.

Well, line up the nuts==I know who they are!