If Only All Mothers Were Aunt Sophie

Here’s my problem with my mother. I want her to be my Aunt Sophie. I think the whole baby boomer generation would all like our mothers to be Aunt Sophie. She was 92 when she died two years ago and it was a terrible loss for her two remaining sisters, (the twins) one of whom is my mother. But it was also an enormous loss for all her nieces and nephews as well as her children, grandchildren, and great grandchildren. First of all, she was incredibly funny. I mean laugh out loud hilarious. Then she had such a positive attitude. When she found out she was going to die, she declared that she was not afraid to die but she didn’t want to suffer. So she decided to move into her daughter’s home, have hospice care and good drugs, —so as not to be a burden—and die with dignity. All the friends and relatives came to say goodbye while they still had a chance to let her know how they felt about her. And a few days before she died she decided she didn’t want any more visitors and she didn’t want to talk anymore, except to my mother and her twin, Rosalie, her daughter and Honey who was Fritzie’s daughter. Fritzie was Sophie’s twin. She died in 1980 from lung cancer. 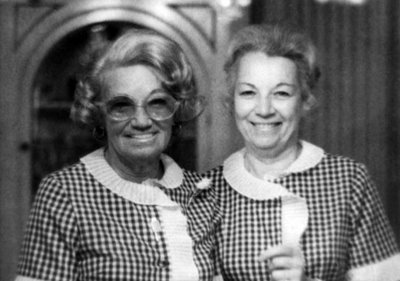 the Twins: Fritzie and Sophie

Yes, my grandmother gave birth to two sets of fraternal twins. None of them were even remotely alike physically or personality wise, but when one had an ache the other had a pain. The twin phenomenon is really spooky. I would call my cousins and ask if their mother had hurt her arm because my mother had pains there, and of course, she had. Aunt Sophie was strong willed, funny and basically grounded everyone else. Aunt Fritzie was a real sweetie pie. Always good humored and upbeat. She loved clothes and so would buy two of everything in different colors and then Aunt Sophie would take one. She would buy designer stuff, and once even called Paramount studios to find out where Doris Day got a sweater I own today. As a consequence of her marriage, Aunt Peppy was an Orthodox Jew and was very involved in the temple, Haddasah and other Jewish organizations. 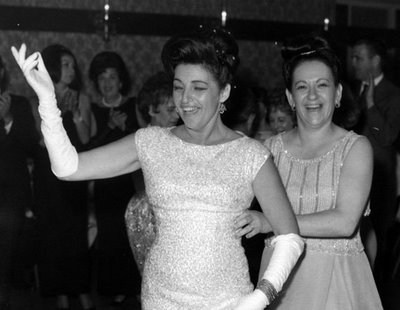 the twins: Rose and Peppy
She made it her business to be in charge—except when Aunt Sophie was around. My mother was the baby so she didn’t have to do anything but look pretty and have fun. She and my dad were great at partying and were great dancers. Aunt Peppy and Aunt Sophie did all the housework and tasks my grandmother assigned. Expectations, as far as cooking or cleaning, were seriously limited for my mother and Aunt Fritzie. The other siblings, Betty, who was the eldest and kind of the queen, Sarah, who had polio as a child, and Helene, (one of my personal favorites), who was between all the twins, kind of filled in the blanks. Uncle Jack, generous and loving to a fault and the only male simply supervised his sisters, (without having to know anything) whenever they were assigned a task.

When my grandparents got old and infirmed, my Aunts took care of them. When my Aunts and Uncles got old or sick, the other Aunts took care of them. The idea of an old age home was never, and I mean never, part of the conversation. Do you remember the movie “Where’s Papa?” Every time George Segal tries to say the word ‘home’ for his father, he starts to choke. That was nothing in comparison to the way my family dealt with the idea. It was a “shonda” – an evil. Not one person in my family was ever in that kind of an institution. And I have, as you may have guessed, a pretty big family.

And so the expectations our parents had was that we would take care of them like they took care of their parents. But it was such a different time. And they all lived near one another. And there were so many siblings who didn’t work and felt it was in their job description to do whatever they needed to do for their sisters or brother or husbands. And for whatever reason, people didn’t seem to have lengthy illnesses, except for my dad who had multiple sclerosis, and although he was a quadriplegic, no one ever though of him as a sick person. And he died of complications not the disease, but he did it at home—as did almost everyone else.

And now I find myself, still being caregiver to my children, in a situation where my mother expects me to be caregiver to her. And to tell you the truth, I, like so many baby boomers, am not prepared to do that. I love my mom but I was never taught to do that. 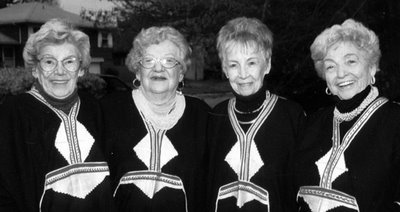 the Sisters: Helen, Peppy, Sophie, Rose
In fact, in my family the children were protected from any bad news. I read literature about women who are giving up successful careers to return to their childhood homes in the middle of nowhere to care for their aged and sometimes, you should excuse the expression, demented parents. Remember not too long ago when women had to chose between family and career? Are we right back to square one, but with the older generation? My Aunt Sophie would never have expected anyone to give up their life to take care of her. My mother is quite the opposite and although it never seems to be enough, I’m doing the best I can. Which is why, I hesitantly admit that, yes this is a generational problem and we all need to think out of the box and find better alternatives, and I wish my mother was Aunt Sophie. We’re just sayin…Iris
Posted by Iris&David at 6:42 PM

Hi !.
might , perhaps very interested to know how one can make real money .
There is no need to invest much at first. You may start to receive yields with as small sum of money as 20-100 dollars.

AimTrust is what you thought of all the time
AimTrust represents an offshore structure with advanced asset management technologies in production and delivery of pipes for oil and gas.

Its head office is in Panama with offices everywhere: In USA, Canada, Cyprus.
Do you want to become really rich in short time?
That`s your choice That`s what you really need!

I feel good, I began to get income with the help of this company,
and I invite you to do the same. It`s all about how to choose a proper companion who uses your savings in a right way - that`s AimTrust!.
I earn US$2,000 per day, and my first deposit was 1 grand only!
It`s easy to start , just click this link http://oworagahu.angelcities.com/dybonom.html
and lucky you`re! Let`s take our chance together to feel the smell of real money

Hi there!
I would like to burn a theme at this forum. There is such a nicey, called HYIP, or High Yield Investment Program. It reminds of financial piramyde, but in rare cases one may happen to meet a company that really pays up to 2% daily not on invested money, but from real profits.

For quite a long time, I make money with the help of these programs.
I don't have problems with money now, but there are heights that must be conquered . I make 2G daily, and I started with funny 500 bucks.
Right now, I'm very close at catching at last a guaranteed variant to make a sharp rise . Visit my web site to get additional info.

Hello!
You may probably be very curious to know how one can manage to receive high yields on investments.
There is no initial capital needed.
You may commense to get income with a sum that usually is spent
on daily food, that's 20-100 dollars.
I have been participating in one company's work for several years,
and I'll be glad to let you know my secrets at my blog.

Please visit blog and send me private message to get the info.

Glad to materialize here. Good day or night everybody!

We are not acquainted yet? It’s easy to fix,
my name is Nikolas.
Generally I’m a venturesome gambler. recently I take a great interest in online-casino and poker.
Not long time ago I started my own blog, where I describe my virtual adventures.
Probably, it will be interesting for you to utilize special software facilitating winnings .
Please visit my web page . http://allbestcasino.com I’ll be interested on your opinion..