August 7, 2006: Today my dad would have been a hundred years old. He passed away twelve years ago --- 88 isn’t bad in terms of longevity –- but just the idea that he would have been a century today still gives me pause. I’m visiting with my mother in Palo Alto this weekend, and found a wonderful picture of dad, trimmed from one of those photo postcards people used to send, on the mantle in the living room. It must have been taken in the late 40 s or early 50 s, and dad is walking with a jaunty step on a downtown sidewalk, (it could be Manhattan or Salt Lake, hard to tell) with a cigar in hand, and showing that it is possible to wear a double breasted sport coat, and still be chic. It’s a look that I’m not sure I have ever managed to pull off with quite the same panache in my six decades, but it definitely gives me hope that it could happen some day.

When we were growing up I never really thought that either Tom or I looked very much like dad. His face was more square, a solid jaw, and though I suspect we smiled not unlike him, it wasn’t really until the last ten or fifteen years that I started to see the resemblance. We all have those moments in front of the mirror (I’m informed by Iris and Jordan that perhaps I have too many of them) when you try and do one of those Disney-esque Time-Lapse things, by pulling your hair and cheeks back as you look in the mirror, trying to see what you might look like in another ten years. Now and then, when I do that, I SEE my dads face. It’s almost scary. But there is something magical about DNA, and often those little proofs of lineage only become obvious to us later in life. 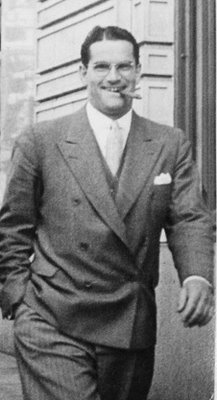 At some point, let it be said, I would be happy to just walk down a downtown sidewalk (New York, San Francisco, even Salt Lake, but Please, don’t let it be Downtown Disney) and carry off the look in this picture.

Yesterday at 5 in the afternoon, at mom’s place in Palo Alto, a stunningly nice senior place called the Hyatt Classic, a dozen men and women in their 80s, mostly, with a few young chiquitas in their late 60s, gathered around the Grand piano and sang the songs of their lives. Mom, who isn’t shy about getting on a piano and running through her repertoire, took the lead, and started playing her ensemble of Cole Porter songs. Everyone there knew most of the songs by heart, and I must admit I knew more than I thought I would. 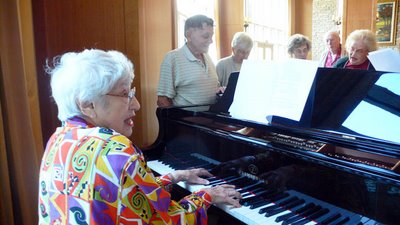 Mom and the Cole Porter Chorus

The Porter lyrics, like those of Sondheim (though perhaps a bit more so) are full of the most delicious little word plays. When we got to Always True to You Darling In My Fashion, I just cracked up at lush elegance of

"Mister Harris, plutocrat,
Wants to give my cheek a pat,
If the Harris pat
Means a Paris hat,
Bebe, Oo-la-la!”

as I tried to sing along. Oh, that Paris Hat, too wonderful. Several pianists gave it their best, and the singing, as someone proudly pointed out to me – unscheduled by the Hyatt folks – just happening spontaneously because they love doing it, lasted for over an hour. That’s a lot of songs when the songs are only two minutes each. I wondered how it came to be that I knew so many of the tunes, most of them written before my time. Obviously the fact that mom played them on the piano at home had the most to do with it. But it gave me pause. In twenty or thirty years will today’s kids sit around a piano and sing “It’s hard out there for a pimp…” Somehow it doesn’t seem that plausible. At a bar the other night Iris and I both loved the background music, and found out it was from a Kenny Rankin Greatest Hits album. I know Kenny G, Kenny Rogers, Kenny Loggins, but somehow Kenny Rankin never made it on to my radar, though I’m happy he now has. Maybe that’s what we’ll be standing around singing in twenty years (that and all the Beatles songs.) But watching the wonderful group of seniors enjoy the music made me think that dad felt the same way about Golf. There was nothing about golf, the shots, the outdoors (hitting out of a rough on the 14th fairway was as close to camping as he ever got), the camaraderie, that he didn’t love. I got a haircut Saturday. 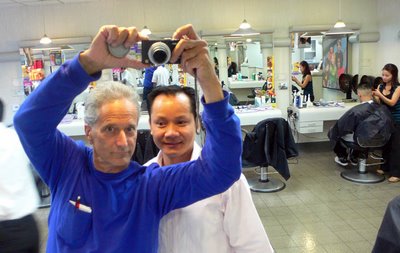 At the Supercuts in Palo Alto


Everytime I do, and I have to look in the mirror, perhaps hopefully, perhaps merely my keen eye, I think I begin to look a little more like Dad. I’m going to see if I can find one of those old double breasted suits in the downstairs closet. With a tweak here and a tweak there, it just might fit. We’re just sayin. David
Posted by Iris&David at 1:10 PM

Your dad was one hellava handsome guy.

But David, don't get a double breasted suit coat like his.

If you were wearing that suit, it'd be hard out there for you.

And I'm just not whistling Dixie.

David, you can expect a box of cigars arriving within a few days.
Possibly it's the missing piece you've been looking for.