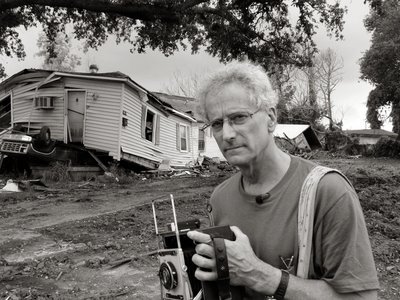 I have been a photographer for forty years, and yet there are things which still surprise me. It can only be a good thing, I suppose, that you are able to continually find something newly invigorating in your chosen field, but often those moments come from somewhat unlikely places. Therein lies the satisfaction. This week Iris and I left the Big Apple for a couple of days to take on the Big Easy. New Orleans is a city still reeling from the impact of the destruction of Katrina a year ago, and trying, as it slowly, painstakingly slowly, rebuilds, to remind itself of what it wants to become again. I spent a month on the Gulf Coast in January working on a story for National Geographic Magazine, published this month in a 24 page article. The idea was to take a look at the coast months after the storms, and see what, if any, progress had been made to try and get reconstruction going. What I saw was depressing and unsettling. Many areas were virtually untouched since September; it was as if you had been dropped into dead zones which had been frozen in time. I was, as it happened, in Atlanta at Home Depot headquarters just about the time that Rita hit western Louisiana – the last week of September. As we watched in their “crisis center” the movement of the storm, and the local reactions to it, the one surprising thing I learned was that right after Katrina, the usual “morning after” rush of shoppers to Home Depot to buy the things they needed for repairs never materialized. It was the first time anyone at Home Depot could remember (and they have all the numbers to back it up) when there wasn’t a rush to “fix things up.” The reasons we now know. Hundreds of thousands of people either had left town, or, in too many cases, were unable to return to homes which had totally been destroyed. It was unlike anything that has ever happened in my lifetime in this country. Storms hit every year, some homes are ruined, but there is always a reason for that “next day” rush to the Home Depots of this world: people are fixed on staying where they are, and want to start the reconstruction process as soon as possible. In New Orleans, and other towns across the coast, there was simply nothing to go back to. Nothing to repair. Nothing to fix. Nothing to work on. Nothing to hit a few boards into in order to keep the water out.

It is difficult to photograph something that isn’t there. Sure, you can see damage, and in many places it was an obvious and stark reminder of what had taken place. But when there is nothing left, you will be pressed to find a way to show that barren quality in a photograph. But I met people throughout the month of working there who I will remember for sometime. Robert Guzman, whose house had been swept away, and was then living in a trailer, wanted us to see the lone remaining picture of his former house. But he couldn’t find it. He looked all over the place, talking the while, trying to describe what had happened during the big blow. But no picture. We said goodbye, and I headed on down the road, going another 5 or 6 miles before I reached the Mississippi Gulf Outlet (or MR. GO, as it is known), the waterway constructed in the 60s to facilitate shipping access to New Orleans, but whose presence acted as a conduit for the storm surge as it came inland towards the city. There, photographing the rocks and water, I was surprised when 20 minutes later who should arrive but Robert Guzman. He’d found the photograph of his house, and he wanted us to see it.

In the Lower 9th Ward, a black neighborhood on the “other side” of the industrial canal, the destruction was nearly complete. Hundreds and hundreds of homes were essentially lifted from their foundations and smashed against trees, cars, and each other. The waters rose ten to twelve feet everywhere. There was no escape. I kept going back to the Lower 9th, a neighborhood just ten minutes drive from the relatively untouched French Quarter, probably a dozen times over the month I was there. Each day I would pass the same destroyed homes, my jaw dropping in amazement. I never got used to seeing the depth and breadth of the destruction. The last day I was as shocked as the first. There I met a wonderful 83 year old man named Herb Gettridge, who built his house on Roman street in the 1950s, with his own hands. He was a mason, and apparently quite a good one. This house was built with three layers of plaster – no dry wall for him. Sturdy and tough, the house was nonetheless flooded to the ceilings the day the levees broke. As we walked through the house my heart just dropped like a rock when we came to his clothes closet in the back bedroom. Filled with new suits, still in their plastic, readying for parading that September, 19 days of ceiling high water had rendered the suits and hats on the rack above them, nothing more than decaying cloth. A total loss. A man’s life in one closet, turned to piles of rotting thread. Anywhere you would go in the city would find people like that. Those trying to make something of their lives, caught in the middle of nature and an unresponsive government. Those were the lives I tried to photograph during my month on the coast. 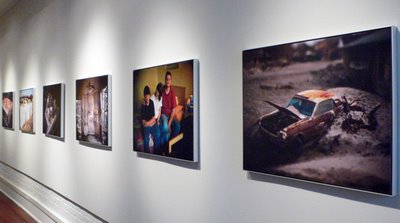 The Cabildo Show - New Orleans (running through December)
This week, those pictures came home to New Orleans. The Louisiana State Museum and the Geographic got together to put on a display of 23 photographs called “After the Storm.” The prints were made in Washington, and shipped to New Orleans.
We figured out the order they should be displayed in, and framed onto the walls. As part of the exposition, a piano belonging to rock great Fats Domino, beaten up during the storm, was also on display. Last night (Thursday) a reception was held for the opening of the exhibit, and while I was somewhat trepidatious about the response the photographs might get, the end result was in itself surprising and satisfying. Virtually everyone who came felt the pictures had told their story in some way. I signed magazines for over an hour (some 200 of them), and had brief chats with people as they came by. A half dozen of my subjects came, too, people in the pictures, people who helped me make the pictures, people who were part of the story of the Hurricanes. I want to thank all those people, and remind them that this story is really their stories. For a couple of hours, on the second floor of the Cabildo Museum, the New Orleans spirit which I used to know was back in full force, foreshadowing, I hope, the rebirth of a city yet to come. 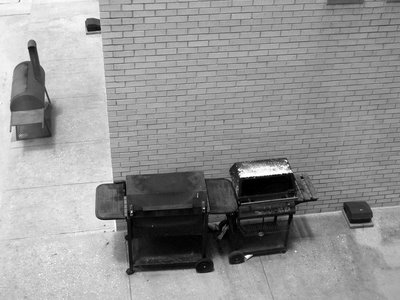 What else can you say about a city whose airport ramp has a smoker and two barbeques (and two rat traps?) Count me in!
We’e just sayin. David
Posted by Iris&David at 11:01 AM

Congrats on the show - glad to hear there was such a great turnout...

And yep, you hit it right on the head: the trick in NOLA and the rest of the Gulf Coast is how to photograph that which is not there.

Anyone who missed the show..including me..truly missed out. I am in hopes of soon viewing it next time in NOLA! I am glad it went over well.