Too Little Too Late

The White House made Laura Bush available to the networks to talk about contributions to libraries as part of their Gulf recovery effort. There she was talking about how everything is so much better and how encouraged she is about not seeing wrecked cars on the yards of destroyed homes. We were in New Orleans last week and there were still wrecked cars on yards. I don’t know where she was. Jordan says they took her to areas where the Bush friends live. I’m sure there were no cars on those yards and they probably had lawns. Couldn't the press office have guessed that Laura would be in one shot talking about blue skies and butterflies and the next shot would be of some dilapidated structure that used to be a home with an abandoned car still under a tree.

Talk about too little too late. The President said yesterday that he was determined to help those people who were still in trouble. Is he kidding? If he ( and the thousands of people in homeland security and relief agencies) couldn’t find a way to help “those” people for a year, what, besides declaring a day to honor them, is he planning to do? Will he send out search parties to locate and identify displaced people everywhere from Florida to Texas? Will he then order FEMA personnel to use FEMA vehicles to move them back to their homes—or since there aren’t any homes, to FEMA trailers. 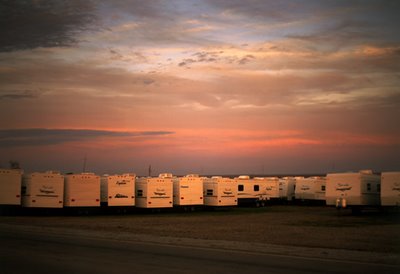 Is it me or do other people see that the guy (and his party) are in political trouble and now he is prepared to give lip service to a problem he and an entire administration were incapable of solving. These concerns can’t be politically motivated can they? And at the very least they should have briefed Mrs. Bush about the fact that not all the cars have been removed and in some places there still aren’t libraries to put the books.

The networks are covering the anniversary full force. And what are they doing to make things better. Shameless self promotion. There hasn’t been one story about one person which hasn’t involved the way some network person did something wonderful to help them. NBC is the worst. Brian Williams did an entire hour about Brian Williams and I think there might have been a mention about the Gulf. It went something like “This is what I did and this is how I felt and this is what I tried to tell the White House and this is what I hope might happen sometime in the future.’’ It's like that old joke, “Well enough about me let’s talk about me.”

I don’t like thinking about myself as a skeptic or as cynical but some would say “a rose by any other name still smells”. What good are any of the TV outlets doing by celebrating the anniversary of such a tragedy. 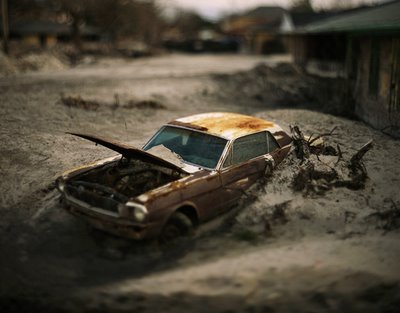 A Car buried in sand, Lakeview, New Orleans
Did I say good? How foolish. It’s not about good it’s about profits. Is this another case of “we’re just giving the people what they want.” Do they think the American people don’t know what’s going on? The American people are not stupid, they have chosen to take this national embarrassment, (just like the war), off their radar screens. The people who are not suffering have chosen not to pretend to care. They have moved on. The networks can’t get over it but the people already did. Do they need to fill air time? John Karr isn’t a story so they needed something almost as horrendous? Why don’t they take all the money they spent covering this horrific event and the Jon Benet tragedy, give it to the communities still in dire straights – the ones Laura Bush didn’t see.

David Burnett was in New Orleans January of this year. He thought it might be too late to take any real pictures or get a sense of what people went through. Unfortunately he was wrong. People were still going through it and continue to do so. When we opened a show of his work from that story, in the Cabildo Museum in New Orleans, hundreds of people who were affected by the storm came to see it. The community felt that David’s pictures, along with pictures taken by young people from the city, really represented what the people suffered. It was not about David, it was about them. He’s opening a show of that work in NY and the Cabildo Museum is mounting a show that will travel throughout the US. Because it is important for all of us to understand the consequences of "too little too late". Maybe the President should see it. We’re just sayin… Iris
Posted by Iris&David at 1:07 PM

The final takeover: I seldom paid any attention the address of NOAA until the past few days. On Sunday Key West was ordered to evacuate all tourists. When that happens this town shuts down. For a city that derives all it's income from tourist it has a devastating effect. Actually it has happend nine times in the past two years. Millions lost. Why does it happen, because NOAA dictates our future with it's forecasts. As Ernesto snailed it's way across the Florida Straits everyone from Chertoff down was on TV telling us how prepared they were to help us. And I mean everyone, over and over again. I sat inside my home with the ac on, it was sunny out. It was sunny out for three days as I waited for the impending doom. According to NOAA. It never happened. Today Wednesday it's finally raining, not hurricane rain, just some tropical dew. My store is still boarded up because no one is back in town. NOAA came on the TV and announced they had not forecast the storm correctly. However it might hit the Carolinas so FEMA is moving up there, just in case. Stupified by all this I was looking for an answer and out of nowhere I found it. You see the address on the web is NOAA.Gov
The Gov part was my answer, now the administration has taken over Mother Nature.

I, too, were there in the ninth ward shooting for an agency, and I STILL cannot believe we're spending roughly a Billion per day in Iraq..yet we cannot save our own.When it's stated it appears as a 'dead zone', this is highly accurate! I took my camera from my eye and remarked to myself how Pres. Bush apparently dosen't care about what we're reporting. I think a CNN correspondent said it best not too long ago, when she stated,"..people get it, politicians don't.." And this is the Gulf Coast correspondent, based in N.O. The diversity from one end of the city is astounding, and telling..A shame, really..This is America????