Loving our children is part of our job description. Liking our children is not. But I must say that I am a lucky girl because I both like and love my children and, in addition, I am very proud of their achievements. The kids are 15 years apart. It's like having two only children. Seth (the elder of the two) was a reporter for a local Southeastern Ma. Paper for a number of years and he won many awards for his reporting. Each of those awards was terrific and I don't sell them short. But my pride came from the fact that he made a decision about what he wanted to do. He made a commitment to the community in which he lived and he covered the issues and the stories that made a difference in his community. At one point he thought maybe he wanted a change and he went to work for a PR firm. Boy, was that a mistake.
"Mom", he said, "How did you do this? They want me to make up quotes. It's unethical to make up quotes."
"Well honey" I said realizing I was about to confess to the blood of my blood, that I was a PR whore, "That's what they pay you for-to make some CEO sound intelligent."
"I don't think it's what I am comfortable with as a life path."
"That's OK honey, you make choices all through your life and whatever you are comfortable with is what you should do."
He went back to the paper the next week. And I was proud of the decision he made about what he wanted to do with his life. 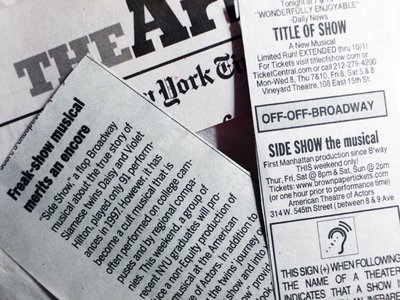 the SideShow announcements in the Times

Last night Jordan opened in an off off Broadway show. 'Off off' is not 'off,' but it's the real thing for an aspiring musical theater performer. Jordan started to love the theater when, at four years old, our friend David Fisher took her to see 'Les Mis'. We picked them up after the show and she looked liked she had been working for 18 hours. Her only comment, when I asked her how she liked it was " It was great but I asked Fisher not to sing because I wanted to hear the people on the stage." That was just the beginning.

She performed at every school event and at our home nonstop. She started to listen to show tunes all the time. We loved it because we didn't have to listen to the dissonant sounds of young rockers screaming obscenities. Then, at 10, she decided she needed to go to theater camp. "Absolutely not." I said after she had called the 800 number for a camp advertised in the NYTimes Magazine, "I hated camp and I don't want you to be miserable." 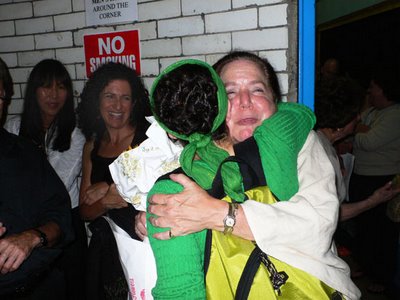 Jordan gets a hug from Joyce after the show

"Get over yourself," Joyce Kravitz, a dear friend said. "She needs to get away from you and do what she wants." Reluctantly, I agreed and she went to Stage Door Manor. When we saw that little pitzel perform we could hardly believe it. Here was a kid diagnosed as ADD who not only focused on her performance but knew the lines for everyone in the show. I admitted to Joyce that she had forced a good decision.

She went to Stage door for 8 years, but in between summers she performed at the alternative arts centered public school she attended from 6th to 12th grade. Every show was a joy. And yes, we are a little prejudiced about her talent but she is good. Not in a high school way. And not even in a college way, (she is studying for a BFA at Emerson College). She is a professional performer in every way. 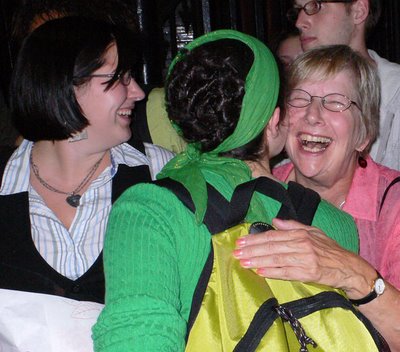 Jordan gets a hug from Emily Tinawi and her mom, Ruth Otto

So we went to see "Side Show" last night. Having competed with 200 other young women, she was cast as one of the leads. She was terrific. Many friends, who have known her since before she was born and have seen the talent develop, were there to share the evening. And was I proud? Yes. Not because she has a God-given talent but because she respects the talent and works so hard to make it the best it can be. Will she ever make it on Broadway? I don't know but she's going through all the steps. And she's making grown-up decisions about what she wants her life to be. I am a proud parent. And I hope my kids know that our pride is part of the basis upon which they have had the courage to pursue their dreams. We're just sayin?Iris
Posted by Iris&David at 11:05 PM

My brother and I are 15 years apart...
Cute pics of the twins.... and an interesting article today about the longevity studies of twins...

I've known Jordan since she was six. I've seen her perform in school plays and workshops. I'm constantly amazed at her encyclopedic knowledge of Broadway musicals and her devotion to the theater. Her performance in Side Show blew my socks off. This is an unbiased review from someone who is not her mother. Jordan Kai Burnett. Remember the name. Someday you'll see it in lights.

I, too, am kvelling--you can see it in my face!
Jordan is a very special and talented woman who has kept her focus on broadway and the musical theater for most of her young life.

Her talent and sweetness exude from her soul and provide great pleasure to mine.
Joyce Kravitz

I am proud to say that Jordan Kai Burnett is one of my best friends in the whole world. She is amazing and I know that in no time I will be going to see her on broadway shinning above everyone else. That's just how Jordan is!
~Emily Tinawi~

I'm totally agree with you Iris, we are proud parents but we get MORE proud when they grow up and follow their dream