To Assimilate in Simla

I am working out west this week, in the homestate of my birth. Utah, some would say. Zion, others would call it. But whatever you do call it, it remains a singular part of the country, imbued with its own style, look, sounds, accents, and above all, spectacular geography. Driving through the country side to get to my final destination (or, as Steven Wright reminds us, why do they call the place you are flying to a “Terminal” – what surprises do they have waiting for you there?), I passed by some of that great red rock country, sheltered with giant rain clouds, the kind that remind you that while God may have made you, he probably did it as an afterthought to the scenery around you. My mom’s grandfather came to Utah in 1889 or sometime near that. According to family history (never to really be relied upon for accuracy, but it reads well) Nathan Rosenblatt arrived more or less from Russia, with a brief stopover in Denver. (Imagine that itinerary now: Bialystok – Provo. I don’t think they book a lot of people on that route anymore.) Once here, he decided that he would become part of the world he had arrived in, and proceeded to work hard, start a couple of businesses which his 3 sons eventually took over. Yiddish, which I assume was the language in the old country, was pretty much relegated to a memory. My mom, born in 1918 in Salt Lake, like many immigrants children, never really learned enough of the old tongue to converse in it. She knew a few little phrases, but I assume her folks and grandparents used Yiddish as a secret code, to keep secrets from the children when they conversed in their company. Yet, for all the language issues, there was never for a moment a question about where Nathan’s allegiance rested. He was an American from the day he arrived in Salt Lake. The strength of that allegiance is what formed the basis for what became the 20th century American feeling. Immigrants arriving at Ellis Island, or Galveston or Boston, and jumping right into their own version of the American Dream.

Last week, in celebration of Independence Day, a large parade was held by Indians now living in the states. This is Indians from India, not upper New York state or Minnesota. It was amazing to see the turn out. 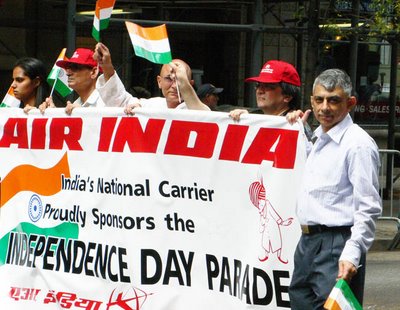 Along Madison Avenue for a dozen blocks, small clusters of Indian families gathered to cheer on the various floats and marchers as they made their way to 26th street, where they were greeted by 4 blocks of Indian food stalls. Even by their names, (the Federation of Indian Associations of NY/NJ –Proud to be Indian and American!), Iota Nu Delta (the Indian college fraternity) and the Kerala Tourism association, you could tell they were still very strongly influenced by their Indian heritage. 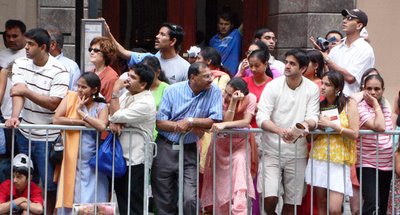 Yet, it did seem as if they were as committed to being American as they were to breathing. There was a wonderful spirit, the usual amusing conversations, and of course butter chicken for 2000, please. It made me reflect that in a time of discontent on so many fronts, and American xenophobia at a high in our life times, there was reason to hope for the arrivals of newly committed Yanks. Pat Buchanan is currently selling a book in which he describes the great threat to American life represented by Immigrants, both legal and illegal. Now, I don’t suppose it would be fair to assume everyone at that parade was totally up to date in their paperwork. But there was no doubt that they had a feeling of commitment – hey, they were marching down Madison Avenue in New York City – to their new lives. 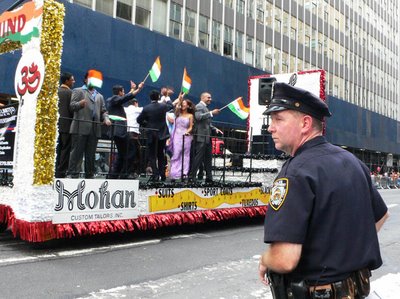 I only wish that the openness of those thousands of Indian Americans is something that could be multiplied around the world. Imperfect as our society is, there is much to commend it, not the least of which is the chance for anyone who comes here, works hard, and plays the game (and you can play the game without drinking the Kool-Aid), can make a great life for themselves and their families. So, step up to the buffet. The butter chicken is really best eaten before it gets cold. We’re just sayin. …. David
Posted by Iris&David at 12:44 AM

All well and good.

Indians from India in Manhattan.

But watch out for the Irish! Pat Buchanan is right about the Irish. Next thing you know all the Irish will start writing books thinking they've saved civilization!