On this, the occasion of our 100th blob, we have decided to reflect for a moment on how we got to be where we are. And so we have chosen as our subject something we hold quite dear—us. 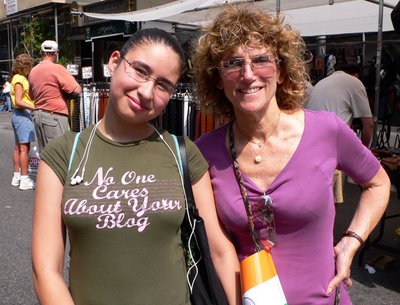 Crystal and Iris at the Indian Independence Day Parade, celebrating our 100th Blob

When we met some 27 years ago, it was not love at first site. Or it might have been for David but he wasn’t looking at me. It was a tumultuous first five years culminating in Germaine Swanson suggesting I throw all his personal possessions out on the street and move on. There were very few possessions at my house, since he always left his things at Arthur Grace’s in case he needed to make a quick get away, but the idea was great and just the suggestion was enough for him to understand that all the lack of direction was much too painful. What was really amusing was that I didn’t need to get married to make a commitment but in his Ozzie and Harriet head, David did.

He left for some photo shoot and when he got back he took me to some closed restaurant in which at some point he had been an investor, and proposed. We decided that we needed to get married within three weeks or we would talk ourselves out of it. The next weekend was too soon for our parents to participate—my dad was ill and his were too far. The following weeks were some shoot and the Super Bowl, so we chose January 29th as the date.

We made the announcement at Germaine’s restaurant on New Years Eve. We were with our dearest friends and David decided to make the announcement in Japanese, with David Kennerly doing the English translation. Needless to say, no one understood anything either of them said. But we did get married in Boonton N.J. We had intended to get married in my parents bedroom with just his immediate family and mine. This was not to be. My mother flew the Rabbi in from Florida (my childhood Rabbi) and moved all the furniture out of her house in order to set up tables for the food. It was kind of a surprise wedding. After the bagels, lox, egg salad, and tuna were gone we moved on to NY where David’s brother and sister-in-law had another party for 250 of our closest friends. That night, we stayed in a suite at the Regency which was so big we wanted to invite people over to share the space. It was a wonderful day and except for the enormous parking ticket we got because Matthew Naythons offered to park our rental car – and did – in a bus zone, it was without incident.

When we look back over the years and see how many of our friends are no longer together we often wonder why we are. Maybe it’s our devotion to Jordan, but many of our friends are devoted to their children and still split. (One pretended devotion and in his haste to move on, split from his children). Maybe it’s the three week rule. I mentioned this previously. After three weeks of separation something starts to happen. Maybe it’s that lives move on and it’s harder to catch up but we decided that none of us, including Jordan, would be apart for more than three weeks while she was growing up. This does not work for everyone. Maybe it’s because David really did make the commitment to marriage, and to prioritize his activities. And while it was difficult for him not to go to the first Gulf War, it was too dangerous for my mental health so he stayed home (did domestic shooting) and built Jordan a doll house. I don’t know. Maybe it’s because we have the same spending habits (we both watch pennies), or because we love to cook, we love to go out, and we love the same foods, or that same we share the same values, or the same need to be a part of each other while remaining independent. Maybe it’s a combination of all these things. When we are leaving the house or the apartment the three of us always say, “take a key in case we get separated.” Even if we know we’re going and coming at the same time we take our own keys. And maybe that’s why we are still together. We can go our own ways, still stay connected, and still choose to be in each others lives. Or maybe it’s because I still think he’s adorable and I want him to be my boyfriend. We’re just sayin. Iris

And I’ll just add my two cent’s worth, given that two cents doesn’t buy what it used to (3 sticks of gum, or a personal size envelope of Fruzola… -- you remember.. it was the cheap version of Kool Aid (is that redundant?).. or perhaps it was only a Salt Lake thing: “everybody loves Fruzola, Yippee-Ola” (I’m not making this one up!) So, two cents worth. The funny thing about US (Iris and I) is that one of us, not me, is actually a grown up. One of us (not me) seems to understand how to deal with annoying sales people, and the kind of situations which need adult supervistion, and resolution sooner than later. I’m actually far more charming in restaurants, operating, as I do, on the theory that until you get that food in front of you, you’re better off being especially nice to the waitstaff. And now that Jordan has worked her third year in the food service industry, I’m sure we could confirm that theory if need be. But living with a grown up is a weird thing when you’re not one. For me, the person who has visited any number of seriously screwed up places, with camera in hand, one would assume that I had attained a certain maturity which would manifest itself in daily life. Not really. I understand certain things financial (though haven’t figured out yet just how to score a couple of gigantic deals, the kind that those 24 year olds are doing at the rate of about one an hour, somewhere), and some things political. Yet, for all the times I’ve been in and out of the Oval office, inside political strategy meetings, etc. etc., I still don’t really think I understand the tone of meetings that the principals engage in when the shit really hits the fan. We all think we understand this kind of thing because of the stuff we see on Westwing, and movies. I don’t really think that’s the deal, though I suspect its either a bit more cowboy-ish, or a bit more Viennese Diplomat. But until I get that job working FOR the White House, I think I’ll just let these other folks pretend they’re the adults. In some ways I guess I think I’m like my dad. I don’t think he was really ever a grown up either. Sure, he knew how to conduct himself in the locker room at the golf club (that’s another one that I never attended the briefing for..the whole locker room, steam room, guy who shines your shoes, sauna, club room thing..) but at heart, I think he was just a lovely guy who didn’t invest a lot of time in the bullshit which businessmen seem to revel in. So here I am, the immature mature one: on the edge of Sixty, I still think of myself as just out of college, more or less still from Salt Lake City, though its been decades since I lived there. Today I spent the afternoon down on Vescey street, next to the giant hole that used to be the World Trade Center, looking for pictures of people coming by to see the place. It’s interesting how five years on, it has become one of the real downtown tourist must-sees. It’s done extremely well – and very simply. It’s a big hole, with fencing around it, and photographs which describe to the visitors just what happened, using a very precise time line. People are truly affected when they see it, as they should be. (Frankly, do we NEED a $500 million memorial? No, I’d say: the only memorial to 9/11 that means ANYTHING is making sure it never happens again. Otherwise, leave it as it is now, build a new building, yes, use the space. But don’t spend millions on some kind of overly melodramatic memorial. I’d thought the Vietnam Wall has finally made us understand the power of Understatement.) When you see something like this – a place where all our lives have been changed – you appreciate the power of history, the media, and the way the two of them spiral together like genetic dna, and carry our view of the world forward. It’s never far from our minds nor our thoughts. As much as we want to pretend that it won’t happen again, prudence demands that we always be thinking of the next solution. Somehow, compared to the insidious battle with the anti-Westerners now at hand, the Cold War, and World War 2 seemed like a piece of cake. Even though the outcome was always, I’m sure, in some doubtful corner of one’s heart, the simplicity of the battle was one you could understand. Now, there is something far beyond the mere power of armies to fight, and I fear that our leaders have done so much to miss the boat, that those worries of the next battle somehow seem to always be present.

So I took my keys today, knowing that after lunch I’d be heading down town, and the girls (my girls! ) would be heading up to Verizon to get new mobile fones. Just in case we’d be separated. Well, sometimes we know, and sometimes we don’t. So the jingle of those keys in your pocket has a re-assuring calming effect. And in the city, we often leave the door open, as if it were the kitchen door of the house, waiting for one or the other of us to just pop in from the back yard. And one of the things, not unlike the jingling keys, is the way Iris sleeps. She sleeps cute. There is something very restful about her punim when she hits that pillow. 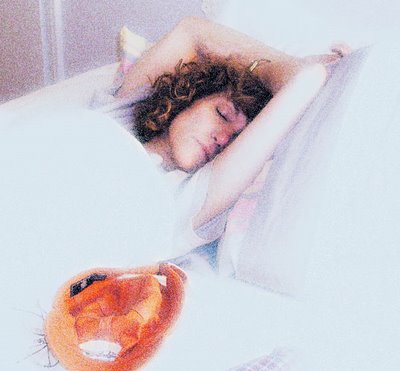 I’m usually up later, and it’s the last thing I see, other than David Niven on TCM, when I turn out the lights. The girl knows how to sleep, even if it isn’t always as fitful as it looks. She just sleeps cute. How can you pass that one up? Even if No One Cares About Your Blob(g). We’re just sayin David
Posted by Iris&David at 1:14 AM

I care, I really do care. Grin.

germaine and i will have been married 37 years in nov.
must have been something in the nuoc mam

Debbie and I married late in life. She was 38, an I a young 37. This was in 1994 after a year of convincing her we were to be, and we are..Brings me to wgat I once heard,"Swans mate for life". As for the WTC Memorial, I am in full agreement with david b in that we do NOT need a physical memorial. Is it not true that as long as we remember, they will always be with us??