In 1976, during the last week of the general election, I was sent to New Orleans to help organize a large crowd event for the Carter campaign. The last week is always the time when the candidate appears in at least three cities a day, usually in different parts of the country. The campaign crafts a schedule that has the candidate, and vice candidate, crisscrossing the nation. It is important to touch base with every constituency in an effort to get them excited enough to vote. No one who is working for the campaign in any of the rally cities, or traveling on the candidates plane gets any sleep but this last push is so exciting that you are able to live on the rush – and lots of bad food and drink. 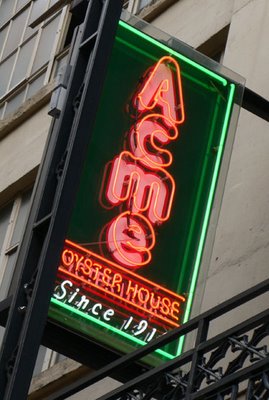 I was working for the future First Lady (Rosalynn Carter) as her Lead Advance. Jimmy Carter, unlike so many candidates, really cared about the way his wife was treated. His staff never put her staff on “total ignore”, as has generally been my experience when working with the spouse. We operated as a team and while she was my priority all the people assigned to the rally worked together to make the event successful. Which is never easy in Louisiana. It is one of the most politically difficult places I have ever worked. Maybe, (in those days), it was the overwhelming amount of corruption, maybe it was the culture, or maybe it was the fact that the people who didn’t want us there were unlikely to participate in conversation. They simply sent thugs to introduce us to their fists. No joke. I remember one call from a volunteer who was crying about being chased down the street by angry Republicans.
“I’m trying to put up flyers, but they are beating us up. What should I do?” she cried over and over.
“Are you nuts? Just get the hell out of there!” I shouted back.

With all the political and logistical difficulties we still had a fabulous time. It was, after all, New Orleans. Wonderful music, fabulous food, dozens of oysters and never a shortage of fun. We stayed in the French Quarter at a new luxury hotel called the Royal Orleans. When I booked the hotel I knew Mrs. Carter would admonish me because we were under instructions to stay at “moderately priced” hotels. So when she told me that she was not happy about our accommodations because it was clearly not moderately priced, I told her that, despite the elegance, we were only paying moderate prices. (I didn’t think I needed to remind her that Jews don’t pay retail whether it’s shoes or a hotel room). 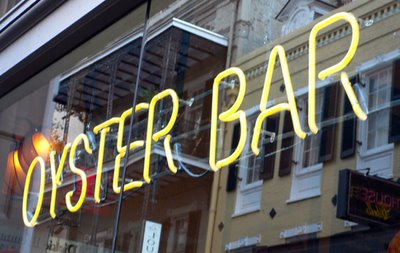 “And furthermore”, I added, “This is where the Secret Service wanted us to stay.” I believe her response was something like, “Nice try Iris.” Anyway, the rest of the team couldn’t have been happier. How could you be unhappy when the chocolates they left on your pillow, had your name engraved on them.

We have made several trips back to New Orleans over the years. The first was when we realized that if we didn’t go some place immediately, we were going to lose our airline frequent flyer miles. We decided that New Orleans was the perfect destination. It was close and we could eat and explore for the day and a half we had left before the miles were gone. We stayed in a charming little bed and breakfast that had no air-conditioning but we were hardly in our room. And eat we did. We had lunch at Acme Oysters when we landed, dinner at LeRuth’s (the house of garlic butter) only a few hours later, Café Du Monde coffee and beignets for breakfast and on the way to the airport we stopped at Pascal Manale’s for lunch. Yes, we were sick. But it was a trip about which we remember every moment.

The next time we visited was also most memorable. We took Jordan, who was eight, and met my friends Tina and Mark there for a reunion. (During my first marriage we met Mark and Tina in New Orleans, slept on the floor of their room and drove back to Wisconsin with them. This we fondly refer to as the firkin trip.) Tina and I had been separated for most of Jordan’s life and it was time for them to bond. New Orleans provided a perfect venue. It rained and rained and we bought silly blue plastic parka’s which kept us dry and in stitches. We laughed until it hurt. It was impossible to be with Tina and Mark and not laugh. Mark bought so many beads for Jordan that we had to buy another suitcase to get them home. We stayed at the Holiday Inn near the Quarter and we watched preparations for the Mardi Gras parade. In between buying beads, and remarking on the floats we ate wonderful meals and enjoyed the city.

David opened a breathtaking show with his National Geographic “Killer Hurricane” work last night. When we pulled up at the hotel and I saw it was the Omni Royal Orleans, no one could have been happier. And then we went in. It is no longer the luxury hotel I remember. It’s Okay for an ordinary place. It has beds and a tiny bathroom and a health facility with a few machines, and a not too large swimming pool. The people at the desk were amused by the concept of engraved candies and much more interested in convincing us that a queen and a king were almost the same. It made me remember that “you can’t go home again.” That being said, we had beignet’s and coffee at Du Monde and at least two dozen raw oysters at the Acme. We ate a not so memorable meal at Emeril’s but we were with lovely people so it was fine. Yesterday, we decided to tour the hurricane area and see the status of the clean-up. It is not happening. Lots of people are still without water and electricity but determined to rebuild their lives. 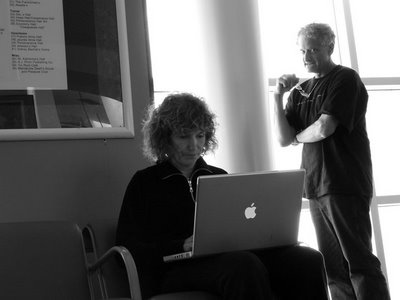 Blobbing during the embarassingly early (3 hours ahead) arrival

Because of the orange alert, we left for the airport in enough time to spend an embarrassing three hours sitting around waiting to fly. We had stupidly believed the media about lines and back-ups. There weren’t any. It was all hype. 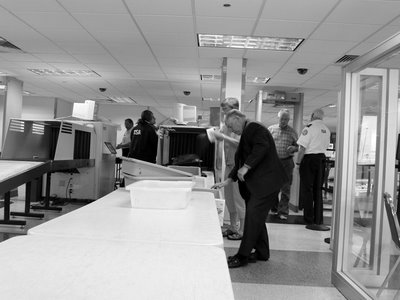 The non existent lines at NOLA Airport Security
If there weren’t a crisis they would have nothing to say. Can you imagine an hour without some doomsday scenario. I’m sure NY and LA, Chicago and Houston are bad, but my guess is that in most of the country people are neither frenzied nor frantic. The one thing that caused me some most inconvenience was that I couldn’t carry my rewetting solution for my contacts so my eyes were very dry. We packed the French sunscreen, toothpaste and hair products in a backpack, waved goodbye, sent it through, and hoped it would make the trip.
Posted by Iris&David at 10:17 AM

Bravo! For so many people the cover of National Geographic would have been enough. Thank you for working so hard to keep the focus on the people of New Orleans and their desperate struggle to rebuild their lives and their city. I keep telling my friends in New Orleans that they have not been forgot by the rest of the nation, but that people are just not sure of where to direct their outrage. Here's to ensure that this great American city and it's wonderful citizens will not be forgotten.