When Seth was growing up there were two girls who were like his sisters. I wrote about one of them (Tina), a few weeks ago when she got married. The other (Brenda) is a college basketball coach. She has a friend we met at the wedding who plays professional basketball for the NY Liberty. I’m only giving you the details because they took us to a place we should have been for a long time. A professional female sports event. 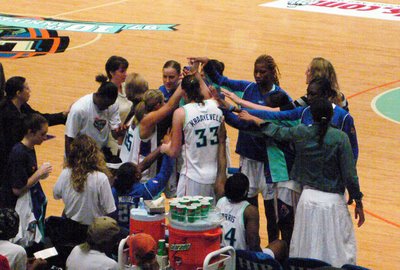 The Liberty does a Team Hi-5 before the game
There were thousands of kids at the game. Many little girls wearing Becky “Hammon” t-shirts. (Becky is Brenda’s friend). But also many boys and many men. There were lots of mothers with children and many fathers with their daughters. Jordan wasn’t with us, because she is in rehearsal, but she would have been if it were possible. It also made me incredibly sad to think about men who have daughters and love sports but they don’t share the two. 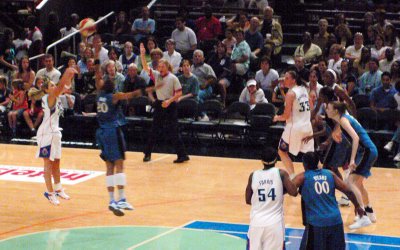 Some just figure they don’t have time for either frivolous sports or their kids, and some because they chose to walk away from their families and the god given opportunity to be with their children, and many because they think girls’ sports is for girls. Of course it is. But like women’s tennis, track, and soccer, professional basketball is wonderful to watch. The women who play are aware and grateful for the fans. There is no ego and no self important acting out. They are talented, graceful, and fun. The sports venue provides a perfect place for sharing family time.

Women of my age never thought about sports as a career. The only women allowed on the field, when I was in high school, were those who aspired to be cheerleaders Their role, of course, was to cheer the boys on. High school sports for girls before 1972, (a year of change in every aspect of society), meant wearing red gym suits and never participating in sports other than running a lap around the track or an occasional round of dodge ball. Women having the opportunity to play professional sports or college sports, or high school sports was not always a given. Until Title IX.

The University of California at Santa Cruz provides this information: “The federal law prohibiting sex discrimination in educational institutions is Title IX of the Educational Amendments Act of 1972 (amending the Higher Education Act of 1965). The law states that "no person in the United States shall on the basis of sex be excluded from participation in, be denied the benefits of, or be subjected to discrimination under any education program or activity receiving federal financial assistance.”

In other words, Title IX prohibits high schools and colleges that receive federal funds from discriminating on the basis of gender. Title IX is most commonly invoked to ensure equal opportunities for girls and women in high school and college athletics. But it was meant for more than that.

There were a number of organizations and people responsible for Title IX. There were and are numbers of people who still believe Title IX takes something away from boys and gives it to girls. The implication being that girls are neither serious or don’t matter. The law needs to be defended, constantly. If I were a young woman, participating in an otherwise male-perceived activity I would hang a picture of Marcia D. Greenberger on my wall and thank her everyday for fighting to protect and extend the parameters of this very important Law. Marcia founded the National Women’s Law Center the same year that Title IX was passed. She keeps a watchful eye on any areas of potential discrimination against girls, like science, math, and technology. Her most difficult task has been to debate right wing and self righteous women. “They don’t tell the truth but people listen”. She often says. I suggested to her that we tell too much truth by feeling like we need to explain everything—and people don’t listen. But that’s another blob.

Personally, I got excused absences from gym because it was boring and I was lazy. But I wanted to take shop and car repair and that was not permitted. Maybe that’s where my aversion to “you’re not allowed” began.

Title IX is critical because (if a law can do this), it insists opportunity be provided to women. Women’s sports is delightfully different, but equally demanding. If you have been to a WNBA basketball game, and seen the look on the faces of those little girls when they watched the game or met the athletes; or attended a high school science fair where the nerds happily include girls; or even attended a girls lacrosse game, where the play is extraordinary and even though they brush one another’s hair at halftime, you know they are serious about the sport, you would get it. Girls love a competitive game (whether sports or academic) and as the mother of a female, I am thrilled that any girl who wants a chance at any career, is by law, able to pursue it -- just like the boys. We’re Just Sayin…Iris
Posted by Iris&David at 1:13 PM