Your Life as a Square

Your Life As a Square

A few years ago, in my first attempt to downsize (it was a total failure), I started to go through all our t-shirts. We have been collecting T-shirts for at least 100 years. I think I found one from the Eisenhower-Stevenson race but it was a little too worn to tell. We have T-shirts from campaigns, T-shirts from political movements, T-shirts from places we traveled, T-shirts from events – like birthdays, anniversaries, and movie openings. If I tell you I had at least 5 cartons filled to capacity, I am not exaggerating.

There I sat on the floor of our unfinished basement looking through the T-shirts I had gathered from David’s suitcases, Jordan’s floor and my drawers. Needless to say, mine were neatly folded and cleaned, theirs were otherwise. But that’s not what I wanted to blob about. It is impossible to part with old T-shirts. They represent different aspects of your life. They hold your memories, your joys, your activities, your successes and sometimes your tears. I wanted to toss them but every time I tried they miraculously reappeared right next to me in the save pile. And I’m not a saver so you can only imagine what David (who cannot part with a used battery) and Jordan (who has her father’s genes) were able to do. I gave up, put all the T-shirts back and hoped there would be a time when I could be less attached.

About six months after my attempt at ridding myself of the rags, I went to visit Pam Hance. We have known each other for nearly 55 years. Not only were we in nursery school together but I was Groman and she was Hance so we always sit next to one another in homerooms and classes. Further, I would go to church and celebrate Christmas with her, she would come to temple and celebrate Hannukah with me. When we buried the gold fish we'd conducted unsuccessful experiments on, we did it with a cross and a Jewish star. We were inseparable for many years – even though we attended different colleges. Although there was one summer when I went to Glassboro State Teachers College (Kosygin and Johnson in the 'Spirit of Hollybush'and we didn't get a T-shirt) so we could study and live together. But that’s a whole other blob. Then she moved to California and became a Sufi and I lived on the road and tried to elect a President. Hers was the wiser of the two life choices. We never lost touch and, in fact, when I was going through my divorce and was a total wreck, Seth and I went to stay with her, do Sufi dancing, sing "Rock My Soul" and just mellow out. Sometime in the 90’s Pam moved back to NJ and we reconnected in a wonderful way. Our kids were grown, our lives had changed, and although we had always had different opinions about political issues, we were still able to find common ground in our expectations about the future. In other words, we always found something to talk about.

Pam is one of my heroes. She teaches English in an urban high school in Paterson NJ. She is smart and talented and probably the most creative person alive — no joke. I was bitching about trying to clean the clutter and toss the T-shirts and Pam said, “Don’t throw them away, send them to me. Mom and I will find something to do with them.” To tell you the truth, I didn’t care. I could be rid of them, and if she used them for something, that was great; otherwise we could give them to those less fortunate — people who hadn’t been to Democratic or Republican conventions, on a Pope’s trip, the opening of a movie, a campaign to change the world for the better or a restaurant in Southern Utah.

A few weeks later she called to say the project was finished and the next time I was in Boonton (the town where they shoot some Soprano’s episodes), I could see it. And here is what I saw. 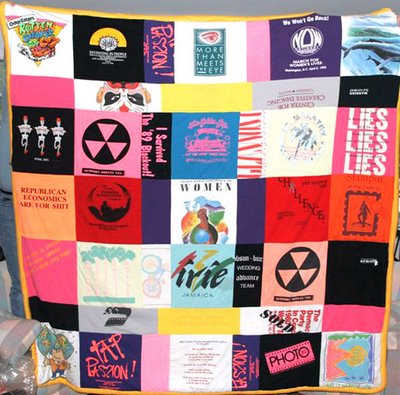 
We have three of them (Papa Bear, Mama Bear and one for Baby Bear). There is nothing better then wrapping yourself in your history. And you know how soft T-shirts get after 1000 washings. This is not an ad but if you have about 25-50 T-Shirts, here’s what you can do. E-mail Brillig1@gmail.com And you can have your life as a square. We're Just Sayin...
Posted by Iris&David at 3:39 PM