It was quite a ‘show biz’ day. First we went to a matinee to see Liz Callaway in a Burt Bachrach retrospective. Then we waited after the show so Jordan could thank her for the wonderful performance, (It is something that Jordan does after we see any performance. She feels that the artists, bad or good, work hard and should know they are appreciated). And she hoped to have a few wise words from the Diva. For people who don’t know the name Liz Callaway, she is one of the great Broadway musical performing artists. Her first show was a Sondheim flop, but she was cast as Grizabella in “Cats”. Personally, I think the show is boring but she did sing “Memories” which is one of Broadway’s great tunes. If you are a parent or Disney fan , she was also the voice of Anastasia in the cartoon movie. In addition, she often performs in concert and spends time encouraging young people to go after their dreams. There were very few people at the stage door so Jordan had a chance to talk with her. Jordan was about 15 and questioning whether she actually needed to go to college or would she be better off taking a few years to ‘make the rounds’—that’s show talk for going to auditions. Liz told Jordan that college was a must and that although she did not regret her career choices, she always regretted not having a college experience.

We left Liz to meet with Louise Sorel. Louise is a great actor who knows everyone in the theater, including Liz but we didn’t have that information at the time. (Louise needs her own blob, which will happen soon.) We headed over to Joe Allen’s, a before/after theater restaurant to meet Louise for a drink. We love Joe Allen’s and Joe, who we have spent many wonderful evenings with in San Casciano dei Bagni, a small village on the Umbria-Tuscany border. Are you starting to see a kind of six degrees of perspiration here. When we arrived at the restaurant Louise was the only person in the bar. We had a nice reunion and then other friends arrived and joined us. They were FOL’s. (Friends of Louise). It was thrilling for Jordan, who Louise explained to all her theater friends, was an aspiring musical theater performing artist. They couldn’t have been more gracious. Among the crowd that eventually surrounded Louise and Jordan (by this time David and I had been moved several times in order for Jordan to meet all the people who ever performed on or off the Broadway stage and we were sitting almost out the door) was an actor I recognized from LA Law, which had been off the air for a few years. John Spencer had just been cast in a new TV show called “West Wing”. Everyone was thrilled because John was a fabulous actor who had been through some hard times, including a serious bout with alcohol.

Louise shouted something to him about the fact that we were from Washington and I had been in the White House. (People from Hollywood and New York love to hear about Washington and the White House). John worked his way over and we chatted about some friends who were now advisors to the about to air show. We exchanged info and agreed that at some point we would have a ‘Washington’ dinner for him. About 7:00 people gathered themselves together and packed to leave for their Saturday commitments, but not without making suggestions or an incredible fuss over Jordan.

A few months later David was given an assignment to shoot the cast of the new drama. (David is a photographer not a hit man but the shoot/shooter stuff sometimes makes people uncomfortable—especially the people he shoots). He had a wonderful couple of days, reconnected with John and more promises were exchanged about getting together and a dinner. A few months after that John was invited to host the White House Photographers Annual Dinner and we took that opportunity to invite him to a less prestigious but much more rollicking evening at our house. He said he was thrilled to have the invitation and of course he would come. We quickly invited a few of our friends, who some might say represent ‘real’ Washington -- but most people know what they represent is ‘real’ fun. It was a delightful evening. John asked lots of questions about how everyone felt about “West Wing” and with the exception of two friends from Utah who happened to be in town, everyone was able to give him a run-down on the reality versus the fiction of the town and the show. We all agreed the world would be a better place if the people on the “West Wing” were in charge. 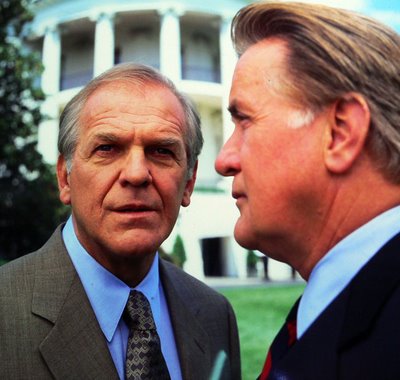 John was a formidable star, a generous soul and an important character element -- a Jersey boy. The character he created, although much like the person he was, made an enduring impression on everyone who knew him and an entire nation who so much wanted the “West Wing” to be what White House should be. The last few episodes without John were for us, although interesting, sad and dreadfully lonely. But the final episode was excruciatingly painful because we knew John wasn’t going to be leaving the White House and the sound stage to go on to do other things in television or his real love, on Broadway. We, as most of America and all of his friends, will miss being connected to such a fine human being. We’re Just Sayin…
Posted by Iris&David at 9:50 PM

Although Leo was never certified as winning the Vice Presidency, he was elected Vice President to Matt Santos.

Super color scheme, I like it! Keep up the good work. Thanks for sharing this wonderful site with us.
»