And Now for a Really Big Shew

Well it's either hard to believe it's over, or, and this is a pretty widely held view - when does thing ever END? Well I have to admit that Idol Mania is good fun. In an age when we take ourselves so seriously, the mere act of singing rather mainline Pop tunes has taken on a whole new aura. Tonight, as we watched the final with a big home done barbecue, it wasn't so much the tension of who would ultimately win -- most in our group thought Taylor had to win -- but all the good stuff that led up to the final two minutes. 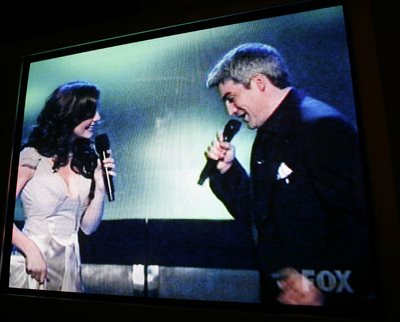 In a stroke of brilliance, the big number of the night centered around the songs of Burt Bachrach, the man who carved out more melodies you can walk out of the theatre with than anyone else of our time. The kids sang in small groups, in big groups - all the Bachrach biggies were included, but the best moment was the regal return of the Queen of the Bachrach song: Dionne Warwick. She looked pretty damn good. I was a fairly early fan of hers owing to the tastes of a young woman in Salt Lake who I dated briefly in 1967. (What does briefly mean, you ask? Well, lets just say that after we had gone out 5 times, I called her on a Tuesday, hoping to see her that weekend, as I was having major back surgery the following Monday: She couldn't go out, she told me: She was getting Married that Friday. Yeah, well, it was Salt Lake, but still. Not even one quick date before you get married? I don't get it.) I had several Warwick albums .. Walk on By, Anyone Who Had a Heart: they were magic. She had a range in that voice which was unmatched. And in the summer of 1967, when I was an intern in Washington DC, I took pictures of her at a concert at Carter Barron, the big Amphitheater in Rock Creek Park. 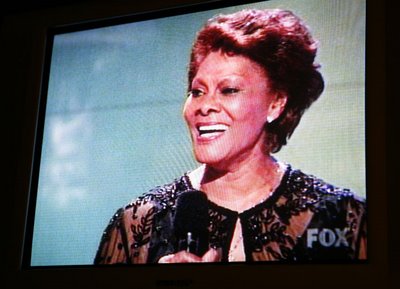 So Dionne and I have a history, sort of. And it was great to see her with all the kids on stage, and BB pounding on the ivories. It was at that moment I realized the importance of American Idol: In an age of "Two and a Half Men", and dozens of horribly written, badly performed shows on TV, Idol gives us the Ed Sullivan show again. Two or three generations sitting around the television, no profanity, generally speaking - good music, and save for the lack of a small Italian Mouse hand puppet, it could almost be 1962 again. Not a bad thing in this world. And while TV knows no limits of bad taste, it might actually prove to the producers that be that it can be not only entertaining, but highly profitable.
We're just sayin.

I go along with the wag who calls it "The American Ordeal."

Hallo I absolutely adore your site. You have beautiful graphics I have ever seen.
»