E: does it equal mctwo or MC squared? 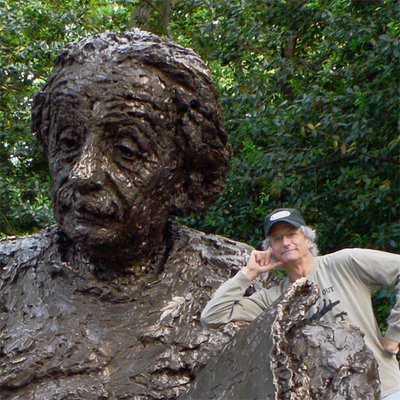 In a week which saw a very funny pair of President George W Bush figures at a Washington DC banquet, the question of identity once again becomes a topic of discussion. In the case of Bush and his alter ego, it was a challenge to figure out which one was actually THE President. Looks, and appearance apparently make the man as much as clothes. In the end, when looking for something to do after his 8 years in office, maybe the President will headline with his look alike, and pack them in for $100 a seat at the Bellagio in Vegas. Given what’s happening with the marketing of personality these days, I wouldn’t be surprised. But there is another figure whose vision I crossed paths with this weekend that strikes a little closer to home.

Saturday morning Iris and I joined Boston friends Wilber and Janet James, in town for a wedding, on a walk-about to the monuments and memorials of Washington. It is a wonderful exercise in rekindling a few good thoughts about not only what made this a great country, but what the power of ideas can be. Our route included the Lincoln (reading the Gettysburg address carved into the marble walls is THE way to read it), the Vietnam Wall and Nurses Memorial, the new and rather uninspiring World War 2 Memorial, the Korean War memorial, the FDR, the Jefferson, and surprise of all: the George Mason gardens next to the Jefferson. 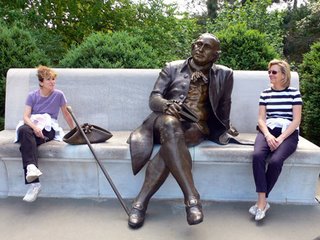 Mason was not only a signer of the original Declaration of Independence, but many of his ideas written for colonial Virginia became the major tenets which Jefferson wrote into the Declaration.

It’s easy to think such things as “all men are created equal” or to understand the societal ill-effects of slavery when they have been taught to you since birth; much harder to have those original thoughts in an age, a time when it wasn’t taken so for granted. The Mason statue, him sitting on a bench, books and walking stick at his side, was the perfect spot for a minor addition last month during the NCAA Men’s basketball Final Four. Some Patriot, literally, had tagged a sign onto the chest of the statue saying “Go! Mason”, which the team did, right up to the end of the tournament. The one non-governmental statue we saw was the first one: on Constitution Avenue and 22nd street, across from the Vietnam wall, and just a block from the State Department. A wonderful, homey statue of Albert Einstein, sitting as if in a garden, on a flooring designed to show hundreds of stars in the universe, with him near the middle. I had been a pretty good physics and chemistry student in high school (AP classes before AP was cool!), and well remembered that day in the 1950s, at Sunday School (yes, the Jews in Utah went to Sunday school on Sunday, not Saturday) when I heard Einstein had died. He was always a kind of magical figure, looking, you know, a little weird, a little “out-there”, but always capable, we were sure, of knowing the answers to anything having to do with the physical world. We all learned the e=mc2, and at that point in your life when you understand the meaning of c-squared, not c-two, you realize the genius of his ideas. There is just not much, not even zero-percent financing from FORD, which can compete with the concept of “the speed of light – squared.” That is a really big number, and is the crux of a lot of really big ideas about how the world is put together (and in the case of nuclear bombs, how the world comes apart.) We took a few pictures of ourselves and Albert, and then moved on to the rest of our tour.
It was later on Saturday night when It started to come back at me again. The “look”. The Hair. The “Einstein” thing. I know it’s time for a hair cut when the first thing Iris says after I step out of the shower is “We need to do something with that hair.” Well, it does seem to have a life of its own, but at the very least, I think I’m being incredibly considerate to my fellow photographers. It’s been, after all, at least twenty years since the mega-tuff of brown hair was so buoyant and blob like that it blocked the view of a photographer behind me. Yes, I think I’m over those days. But now even though it’s a little calmer, it still has a new and silvery life of its own, and gel-or-no-gel, it tends to take off on its own paths after a while, if it’s not being monitored. Saturday night was the awards dinner for the White House News Photographers’ Association at the Ritz hotel downtown. As the evening wore on, my gel slowly dissipated, and I began to look, I was told by several people, like Albert Einstein. Of course it’s flattering to be likened to the great man, I suppose, but I think I would have preferred so based more on ideas, concepts, and a little math, rather than just an unruly shock of silvering hair. 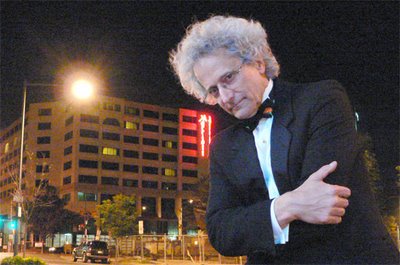 And there is no doubt that even though I am now about the age Einstein was when he wrote is fateful letter to Roosevelt about the exploration and work which should happen towards developing an atomic bomb, that no letter of mine will ever reach the desk of a sitting President with the same kind of impact. Somehow, I imagine Einstein getting such a kick out of people running their fingers through his hair saying, “Gee, you look just like Dave Burnett.” At that point he might say, “well the hair isn’t so bad, but I sure wish I would take pictures like he does.” We’re just sayin.

David
Posted by Iris&David at 1:24 PM

Your hair is a metaphor for you, and that's why you're the photographer we love.

In college, a friend decided to work his way from Einstein's initial equations to the famed result. The closest he ever came was E=2mc. Not bad. Those were the days of the slide rule and punched cards for the mammoth computer that almost closed the school when it went down. Brown straight wonderful waspy hair--unlike mine which mimicked a burning bush. No photos. Just nice memories.

I really enjoyed looking at your site, I found it very helpful indeed, keep up the good work.
»