They're all in Florida (or Maybe Montana)

They are all in Florida (or maybe Montana)

It’s unclear what made me think about this, maybe it's the amount of long distance driving I've been doing lately--in the gold Cadillac. But in our family we never like to admit that anyone has died. No, we pretend that they are living in a place we probably will never go, like Florida or Montana (Aunt Helene hated Florida). How is it that grown up people find unusual ways to deal with the reality of the end of life? Who knows. With my family I think it is all tied up with pre funeral activities. That is when the real drama takes place. Whether it is preparing the body for burial, sitting with the body until it is buried or saying goodbye to the loved one, these are all things done before the trip to the cemetery. In my family, once the body is interred, the spirit goes to Florida (or Montana) and we never have to say a permanent goodbye.

How well I remember my first funeral. It was my grandfather’s. After the service was over we were taken to the funeral motorcade. No one knew where to go or which car to get into. I knew – it was the moment I understood what I would do professionally. Without a moment's hesitation I started to give instructions -" you get in that car, you get in this car," on and on until everyone was comfortably seated. I was thirteen years old and had taken charge of the logistics. Even better, everyone had let me do it and then listened to what I had to say. It was a Dubroff phenomenon since no one ever listened to anything anyone said. I got into some car with available space and we proceeded to the cemetery. But first we drove to my grandparents house, circled it three times, drove to the Beth Rivka School for Girls, circled it three times, drove to the synagogue, circled it three times, We drove to another synagogue, and another, and another, circled them three times and then drove on to Long Island. The funeral procession was endless and we tied up traffic in Brooklyn for days.

We finally reached the Beth David Cemetery and just when I thought the worst was over I realized that it had just begun. Everyone gathered around the grave site. It was very crowded, and there was a man running around yelling "family in front, family in front!" I didn't want to be in front but the cry for "kinder!, kinder!" (children) was overwhelming. I was standing next to my mother, who at first was crying softly then all of a sudden she started to scream, "Papa, Papa, don't leave me, don't leave me, goodbye my soul, my friend, my life." Needless to say this display set them - all of my seven aunts - in motion. They were all screaming and crying, and screaming and crying, and then as if that weren't awful enough my Aunt Sara decided to jump into the grave. 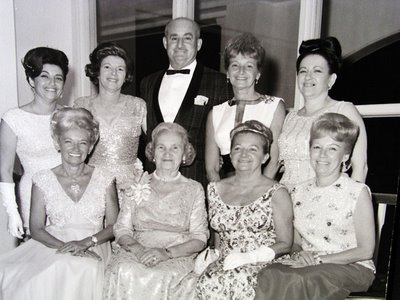 
How different Aunt Sophies death was from my grandfathers. So much less hysterical, so much more understandable, so much more manageable, and maybe a little bit less dramatic — but that’s what she would have wanted. Aunt Sophie was a jewel and one of the great generous, funny people. For example, at one funeral when we were all saying our goodbyes (something we do en masse gathered around the casket.) The conversation went like this:

Aunt Sophie: “She was probably thinking she wanted to save herself a fortune in telephone and gasoline bills.”

When Aunt Sophie died she didn’t take her giant gold Cadillac to Florida with her. I have it. Believe it or not, it gets about 27-28 miles to the gallon on the highway (it gets a mile to the gallon in the city). Anyway, we all decided that in order to keep her spirit with us for as long as possible, I would park it outside the house of anyone who requested it. That way, they would walk outside and think about all of the people we missed so much and also we would know Aunt Sophie was visiting. Probably from Florida (or maybe Montana).
We’re just sayin…

So what are you saying to me? I use to live in Montana and Florida.

Love the hair in the photo. Those ladies look like they all own Cadillacs, with fins of course.