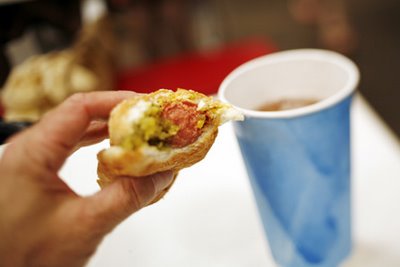 One of the toughest things to try and teach kids in this modern overly-affectated (that IS a word, right?), sensory-overloaded, materially indulged world is the concept of the simple pleasure. Bare feet on grass during summer (though not when you get stung by a bee for it), a perfectly creamy café latte in either the best American coffee house for about four bucks, or any bar in any town or gas station in Italy for a buck and a half kind of give you an idea of what I mean. Yesterday, following a long day of shooting pictures at a high school in Florida, -- which had its own moments of watching that pleasing glint in a smart kids eye as they attacked a question from a teacher and wrestled it to the ground (the question, not the teacher) – I found myself on one of the giant 6 or 8 lane roads peopled by the signs of modern America – fast food, 7-11, three dollar gasoline, and of course Payless shoes that paragon of modern marketing, and in which I should by now own a large chunk of equity, given the money the Burnetts have transferred to their coffers in search of “just one more..” pair of shoes. The place which caught my eye, and not by accident, was Costco. Yes, our absolutely favorite big box – the yuppies best friend. Ostensibly I needed a 2 gigabyte memory card for my digital camera (you know you can always find an excuse when you need one!), so I parked, walked in, flashed my membership card and headed to the digital corner at the front of the store. As a Member (hm.. when is that Membership Organization committee meeting going to be held?), I beheld the 40 inch plasma screens and all the other goodies which emanate from somewhere else, that somewhere usually being Taiwan, Japan, or China. Yes, so much of what is in that store, and virtually all of what is sold in Walmart, comes from somewhere else. China, in the main, India perhaps a close second, but remarkably little from Idaho Falls, Harrisburg, or Amarillo. Well, they didn’t have the memory card I needed (they only had the 1 gig cards, I needed two), so at that moment, the “simple pleasure” light went on in my personal dashboard. I passed thru the uncrowded cashiers (you always feel guilty in passing up a No-Line cashier at Costco, given how much jostling we do when there IS a crowd) to the snack bar. And there, for a buck and a half, I scored the best deal in modern American cuisine. Yes, the Costco ‘dog. Drink (I do wish they would upgrade the iced tea) included, and the aluminum foil wrapped steamy bread and dog with relish and mustard: how can you go wrong. And here is the thing: not only does it taste, especially the first three bites, better than anything at Mortons or Ruth’s Chris, but it just fills you with good feelings, the kind they ascribe to Meat loaf. Talk about comfort. Ah, yes. The best. And to those who bellyache (literally) about the lousy quality of hot dogs in this day and age, and I’ll admit that some of the New York hot dog guys leave the dogs laying in that water a little too long. I mean, I was in the bio lab at the high school and they could have had a field day with some of the New York Hot Dog Water. But think about it this way: the Bun… American grown flour. The dog: Beef Kosher. Now whatever else happens with the Jack Abramoff White House Visitor logs, I will still continue to believe that Kosher means Kosher, and that for a Hot dog, that is saying something. Yes, it’s all grown here in the U.S. Perhaps one of the few items in the store that didn’t add to the Balance of Payments deficit. And oh, was it good. Mindful, though of my ongoing effort to lose a little weight by the simple concept of (no Thirds or Fourths) portion control, I ate 2/3 of it then reluctantly dropped the balance into the trash. And there you have it: simple pleasure of the day #1: good taste, more than one bite, but less than the Whole Damn Thing (giving up something you know you should is also a simple pleasure but it ranks behind eating a hot dog). Now, how do I pass that sense of feeling sated on to the next generation? Or did I just do it? We re just sayin.

David, my admiration for your self-control knows no bounds....throwing away a 2/3rds eaten Costco Sinai Kosher hotdog in the name of girth control...unbelievable !!!
I find it hard to stop at one.
The only hot dog better than Costco's is the original Nathan's from Coney Island (where I grew up).

On throwing away 2/3rds of a hot dog: If any body but DB had been the thrower, I would just brush off the whole event. But DB did it. Maybe it was stale air at Costco? Maybe it was the sweet pickle relish, yellow mustard and no onions, no chili, or the other good stuff.

No need for membership, and they don't sell hot dogs:

but that two thirds was pretty damn' good. we re just sayin!

let me know the next time you go to cosco...around lunch time, preferably...

Did you know that Nathan's hot dogs are for sale at Safeway?

You know, I'm getting tired of looking at that 2/3 eaten hotdog. Startin' to bug me. I know it's just me, but I'm just sayin'.

DISASTER strikes: Because of a screw up on the Blogger site (I tried to actually put a picture of us on the Profile, and it now thinks it can ONLY get the posts from some FTP site).. too much INFORMATION.. but bottom line: we can't POST anything NEW on the blog, until I find a 13 year old computer genius? any one KNOW of one? call the burnetts: 703-6261696 and help us get OUT of this! thanks...
david (We re just SAYIN!)