One of the hardest things about being a photographer is the determination of how you relate with your subjects (I suppose besides .. what the hell lens do I use, its THE issue, isn't it!?) I have tended to like being anonymous, or at the very least, operate on the "fly on the wall" principal; it seems to sort of go along with the basic concept of the "story" being more important than the "photographer/reporter/writer." You might think that an obvious statment, yet if you watch TV, you ll realize its ALL about the reporters, and often very little to do with the event. (Does the concept of ".. and now, lets go live to the Tidal Basin where our reporter Joe Schlabotnik is watching the Cherry Blossoms blossom.... take it away Joe, since, after all you are LIVE and we're actually LIVE on the air at 6 am. Live that is.." seem like something you see and hear far too often?) I know I do. Arthur Grace whose new book "State Fair" is being published this month, [ http://www.utexas.edu/utpress/books/grasta.html] and takes a very droll, classical view of America having fun, summed up the problem with journalism a decade ago, just before he left Washington DC for LA. 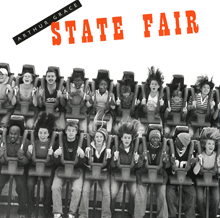 His theory was, and it's still valid I believe, that no Journalist should make over $100000. That, lets face it, if you want to be a talking head, and do a lot of guest tv appearances, and get your self lined up to sell your economics book as a best seller, then go ahead and do that: but dont call yourself a journalist. Journalists should report what they see. They don't have to be come big money mavens of information it order to push the profession forward. Real Journalists would make a nice living, but their egos would somehow remain in check along the way: for example.. Geraldo, Nancy Grace, Anderson Cooper.. well they really wouldnt be "Journalists": their work is 95% about them, and 5 % about the story. You get my point.

Anyway, what it comes down to is how to relate to groups you want to photograph, and in doing so, try and make it a statement about the subjects, and not JUST an ego satisfying "groovy" picture which would - you get the point now? - be all about YOU. When it comes down to doing big set up groups of people there are a few people who really revel in it. Annie Leibovitz is pretty terrific in making those tableaus of, for example, the Sopranos, look like a wild moment that she just happened on to (and which of course she totally created and set up, so beautifully.) But I have a new hero, a guy who I'll never get to meet, and yet who really has taught me something about group shots, and how you , the artist, relates to your subjects. Michael Evans did a picture of the Reagan Cabinet in the early days of 1981, and when you know how tiny the Oval Office is, its a pretty amazing picture. 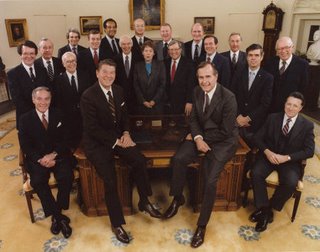 All of the principals - 20 of them - look like they are paying attention, as if they know that all America and all the World (it was still Old Europe then!) wants to see what the hell they look like. Yet, I would have to say my favorite all time candidate for a big group shot, the Cabinet picture which I would love to take, is based on the wonderful Flemish painting by Bartolomeo Vander Hilst, a gigantesque tableau that lives in the Amsterdam Rijksmuseum, usually on a wall opposite from Rembrant's Nightwatch.

It is a masterwork in posing, lighting, composition, and add to that the fact that it's enormous. Next time the President forms a new cabinet, and the Prez is a pal of mine.. that's how I want to photograph the cabinet. You can tell who should be the President, the other senior positions, too are pretty apparent. Not only that, he really knew how to light a big room. In fact, I want to take Monsieur Van Der Hilst on my next big shoot. He can be the Key Grip! We're just sayin.

My favorite group shots were the SE. Asian ones, countries to remain obviously anonymous, where certain people would be placed at the ends of the rows, the easier to crop them out of the final print.

Then, there was that day in Malacanang when we swarmed over the poor guy trying to make a family picher of the Marcos; he was so nervous he couldn't fit the dark slides into his Linhof holders. But WE had fun, didn't we, David!

That wasn't about us, it was being ugly Americans and reveling in it. Or so I think on this night.