Is There Any Crimson Out There? 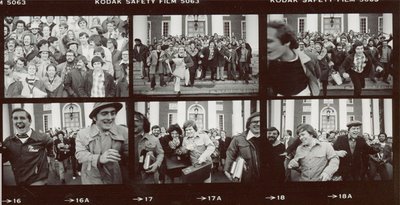 There are, despite the ongoing conventional wisdom, some cool things about getting older. Not OLD, just older. I mean, I can't really imagine that I have been taking photographs for nearly forty years, and that I have been paid for it (not always well, but at least Paid) for most of that time. The fall out of those kind of numbers is that some of the stuff I took pictures of early on has actually become a lot more interesting. A picture I did of JFK in Salt Lake City when I was a senior in High School, actually looks like.. well, JFK. Not a great picture, but it was the first of what would be come a long line of pictures made while chasing American Presidents. (Accent on Chase). The pictures I did in Vietnam - some of them - are way more telling and interesting now than they were when I shot them. Last year, while going through my file cabinets at Contact Press Images (aka Contact - my photo agency), I ran across four rolls of film badly captioned (yea, that is a real Burnett trait) black and white film, labelled 7601 Harvard (January, 1976 - Cambridge - Boston) Clearly these films were done while on some kind of a break from the New Hampshire Primary (who else covered Penn. Governor Milton Shapp?? Anyone?). I visited both the Business School and the Law School. And because of my lousy captioning it's impossible to tell which is which.

So, the modern, slightly better captioning Me tried to get in touch with the folks at the Harvard Biz School and the Law school, thinking that with the 30th anniversary of the Class of '76, some of these pictures might be of interest. 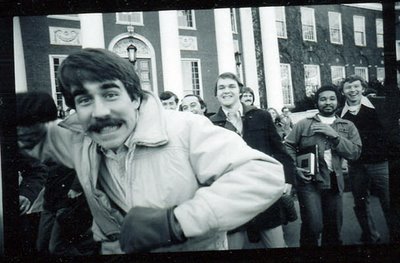 I have to announce to you that even though I sent a cogent note, and some copies of the contact sheets, no fulsome response was forthcoming from either school. Too bad, as I cannot imagine that the subjects in some of these pictures wouldn't love to know they exist. It's one of the things we 50-somethings do so well: Dwell on our Youth. 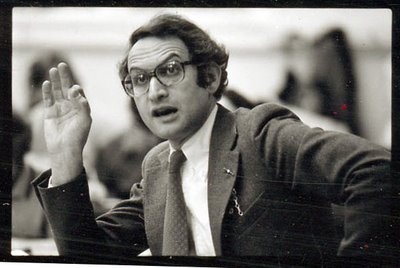 and a nifty series on the whole class posing for the Class picture in front of a hallowed edifice, followed by the whole class running in random madness towards the photographer (me, in this case). What I wonder is: who are these folks NOW? Do the math. They would all be in their early 50s, and if you went to the Harvard Grad schools, chances are you're running much of the world as we know it. I thought when John Roberts was nominated to the court he might be in this group, but he was 1978, a whole two years later. Well, if you know anyone who went to Harvard Biz or Law school in '76, have them get in touch. You never know when a Supreme Court Justice or Captain/Lieutenant/Sergeant-Major of Industry just might have crimson in their background. We're just sayin.

David
Posted by Iris&David at 9:51 PM

Hmm I love the idea behind this website, very unique.
»