The faster I go, the behinder I get. Two weeks and counting, folks, till the election of 2008. I m doing my quadrennial electoral count down this week: I just came from four days with Senator Obama’s campaign, and today, catch up with Senator McCain for this week. There remain a number of striking points, most, really, beyond the simplicity of a candidate and his message. When you travel with the campaign, you become enveloped in a cocoon of reporters and staff which is quite tightly spun. This close to election day, you start to see the details of a campaign in ways which sometimes are harder to visualize. Most striking to me, still is the ubiquitousness of the thumb-toting Blackberry communicators. It’s as if a simple telephone was something banishable to the Election museum. Every staffer, at every level, has the constant posture of ‘neck-down,hands up’ thumbs swirling through all those messages. It would be really interesting for someone at each level of the campaign … Communications Director (more strategy than tactics), Press Advance (some one who leads the pressies around from plane to bus to press center to bus to plane), and maybe a lowly Advance person who spent three days making a basketball arena look like a venue for a High School prom,… all toil with hands in front, eyes down. As a tip to history, maybe they should leave their Blackberrys, with messages in tact, to the Pew Foundation or the Newseum. Messages in tact, so it's possible to actually read what the hell they were typing all that time. No question that todays staff person spends at least 30 or 40% of their waking hours with their thumbs in action (for THIS we were given opposable thumbs?) making sure they didn’t screw something up. Can it possibly be that there is really so much information to digest?

In the days pre-Blackberry (going back to 2000 and beyond) the arrival of the cell fone did change things radically. It’s hilarious to see movies from the late 80s and early 90s with those giant gray Motorolas, the kind you have to go to the gym to be able to lift to your ear for more than a minute. Today’s tiny objects are more practical, do many more things, but in the end provide almost too much access to communication. I won’t actually call it “information” because there is a quality which “information” has which distinguishes it from mere “communiation.” It has to be about SOMETHING.. and the mere act of talking doesn’t necessarily mean you are above ‘grey noise.’ There is plenty of that. Chatter, chatter, chatter, but nothing of substance. How many times do you need to receive the same email? Or versions of it.

I will admit (and this perhaps makes me an old fart) that I’m not sure I’d really want to know that much, in that kind of detail, about the minutae of a campaign's day. There are clearly key bits of information which in a previous day were covered in a morning phone call (usually from a pay fone), and the person on the spot had the obligation to use their brains to make sure the mission was accomplished. That’s the real issue: autonomy and self-direction. If you were the person on the spot, you needed to just make sure that it was going to get done. No constant barrage of thumbable memos. No over-your-shoulder peeking, to make sure you didn’t screw it up. Just Get Out There and Do It. There is something kind of reassuring about working with people who don’t need constant reminders.

In my world, magazine and press photography, things have also changed though less thumb related. You still need an opposable forefinger (that’s the one right next to the Bird Finger) to fire the shutter. Though, interestingly, even the cameras are less mechanical than they were. Everything is numeric, lcd screens, digitally captured images. It’s just not the same ole same ole. We spend hours uploading those pictures to laptops, editing them, sending the best ones to the home office (usually on a wireless network of some kind) which will then make their way to the pages we love to read. This week’s TIME Magazine actually ran a picture of mine shot in film. You remember film. It’s that filmy stuff that is -- take notes here --light sensitive (Open in Darkroom only). You can recapture those exciting stomach churning moments of wondering if you actually HAVE a picture since there is no immediate confirmation. I had a few minutes to photograph Sheila Bair, Chairwoman of the FDIC – the folks who insure your bank deposits. It was one of those sessions punctuated by constant cell fone barrages. Just as I would get her posed (on a roof top terrace), get focused with my Speed Graphic, and load a single sheet of film, that damn phone would go off. And being the week that the gazillion dollar bank fix up was on the line, she would leave me for a minute to speak to a Senator or somesuch, and I’d have to start all over again when she came back. She was extremely friendly and welcoming, but that cell phone seemed to have a life of its own, and I had to work around it. As always happens, you get about ten minutes less with the subject than you would like. Another ten minutes and you could do a couple of other poses, and feel confident that it would be just what you needed. But those rush jobs are the ones that they call YOU for, in the theory that you can come back with something, even if there is virtually no time to work. A few days before, I’d had exactly four minutes with Sec. Treasury Henry Paulson. Four very amenable, very welcoming and accommodating minutes. But you cannot imagine, how fast four minutes can go when you are trying to get three different ‘looks’ to a set up. It is a challenge. They arrive, you shoot like hell, you forget to do that ‘special’ thing you wanted to try (i.e a Holga, or something neo-Exotic) and then, whoosh, they’re gone, off to save the world, and you are left trying to count how many film holders or digi images you actually got away with. Your stomach is still knotted. You have no idea if you really have something Sharp and Well Exposed. I guess the little screens on our digi cams are the modern equivalent of the Advance person’s Blackberry. Helpful, but a Prison Guard at the same time. You can share in some of the info-bounty, but only on the terms of the device itself. 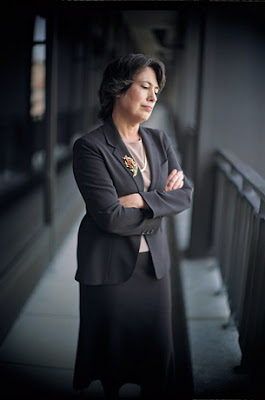 With Sheila Bair, I did shoot about 8 frames of 4x5, and I’m happy to report that one of them appears in TIME this week. Seeing a full page picture does tend to give the image a little more weight. Film may be ‘out of fashion’ but it remains the era when things which are ‘out of fashion’ will continue to flourish. Sometimes it’s nice to be the old dog with a few old tricks. Now, how do I get these bandaids off my thumbs? I have to go write. We’re just sayin’…. David
Posted by Iris&David at 10:32 AM

Sorry to hear about your quadrennial electoral count.

I know what you are going through.

Not only is it embarrassing that people know you have it - but it is very very painful too.

I still walk with a slight shuffle, and moan ever-so-slightly when riding a bicycle.

My advice is Lots of lotion, and four showers a day. It should clear it up in about 6 to 8 months.

Don't use the red-hot poker technique - regardless of what people say - it doesn't work - trust me.

So anyway, your quite brave to come out like this, I never could, and I hope you get well soon and maybe...

nice photo...glad to see it worked out despite the cell phone...

in the camera store yesterday to buy some white seamless paper, while i waited for them to get it out of the back i looked down at the used equipment, and there it was, a 4x5 speed graphic $250 & covered in dust. when my client pays up i may just have to buy it - i do love the holga you inspired, why not a 4x5?

take care of your thumbs - you may have to wind a 35mm sometime.

you old dog. you may be old but you're still doing the stuff that young bucks are trying to imitate.
signed, a young buck.
ottawa, on.

I love your stories of you using your speed graphic. I have the same setup as you (aero ektar 2.5) and love shooting with it. It's always interesting to compare how a pro uses it in the real world.