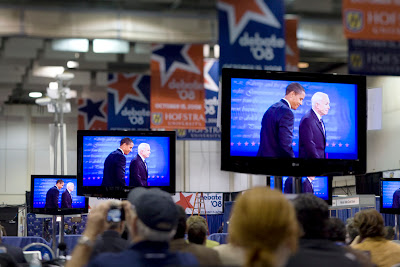 Jesse Jackson says if Barack Obama is elected there will be less of a Zionist agenda. Does that mean all the Jews will disappear? What is wrong with this man? He needs to face the fact that he is not going to be President. He is not going to be a top Obama adviser. And he may never get an invitation to eat in the White House mess yet alone sleep in the Lincoln bedroom. He needs to get over it (put on his big boy pants and go away) and stop trying to sabotage the Obama campaign with racist rhetoric.

Jackson’s behavior is not from today. (If you’re not Jewish this means bad behavior is not new to him.) He has felt entitled to do and say what he wants for a long time. Let me tell you a story about the first time I worked with the good Reverend. It was 1984 and he, along with Gary Hart, Walter Mondale, Fritz Hollings, John Glenn, and on and on, were running for President. My consulting business (three women) were contracted to produce a DNC fly-around fundraiser for the election. We were to take two planes, with four candidates on each plane and fly them to big cities where they would do events to raise money. We were on a pretty tight schedule so after the kick off event in DC were took all the candidates to the airport and boarded two private jets to head into the wild blue yonder. (It being night it was the wild black yonder, but you get the picture.) In 1984 National Airport had noise rules about taking off and landing – you couldn’t do it after 10pm. We arrived for take off at about 10:00. We took the candidates right to the plane—all except Jesse who needed to make a phone call (no cells in ’84). At about 10:20 Jesse was still not on board and I went to find him. He was still on the phone. I excused myself and told him we had a window and I needed him on board. He dismissed me with a wave and a dirty look. And he turned his back on me. I thought he was an inconsiderate jerk but I didn’t want to be ruder than he. At 10:25 I tapped him on the shoulder and told him we were leaving in 4 minutes—with or without him. He told be to go F—k myself. I looked at him and said, “We are leaving now, with or without you. I suggest if you want to play with the big boys you play by the rules.” I left the holding room, boarded the plane, and told the pilot to wheels-up. Mr. Jackson was right on my heels... but he said nothing to me for the next two days. I really think he thought he was ‘Jesse Jackson,’ he had a voice and a constituency-- too important to the Party to leave behind, and I wouldn’t do it. He did not care who he inconvenienced or what was about to be jeopardized – and he clearly had never worked with a woman who refused to be intimated by all of who he thought he was.

That being said, I don’t know what debate all the people who think John McCain won were watching. It was not the same one I saw. Yes, he admittedly had some good moments—which he immediately stepped on with a sneer, or eye rolling, or the repetition of something that had already been said. The split screen killed him. Putting on my speech teacher hat once again, (it’s a really cute hat with flowers and flourishes), you cannot judge a victory by words alone. You have to look at the whole picture, including the body language -- like the facial expressions. And if you want to look at the words, when did it become a crime to be eloquent? I didn’t think that Obama was that eloquent last night, he was just measured. He answered all the McCain questions with what McCain would call “straight talk”. Agree or disagree with him, he was neither confrontational nor was he dismissive. He was elegant rather than eloquent. He looked like we want a President to look rather than the angry whining curmudgeon McCain appeared to be. I don’t pay any attention to polls but I thought the most interesting aspect of the chats with independent voters were that so many of them decided to vote with Obama because of the Palin decision. I guess women are not as easily manipulated as the McCain advisers thought they would be. They still don’t get it. We don’t want some old white guy making personal decisions about choices in our lives. We don’t care about whether or not Obama raises his own money or takes government funding. In fact, we like the fact that he’s not spending oodles of our money – money for health care and education. The McCain campaign has to do some pretty fancy footwork to get to a place where he will be a contender. Maybe he should take a whole different tact. like just telling the truth and taking responsibility for the decisions he’s made. Because if the McCain we saw last night is the truth -- he will thankfully not have an opportunity to give us more of the same. We’re just sayin...Iris
Posted by Iris&David at 6:28 PM

Iris, for us little people and non-English majors, what's curmudgeon? Were not allowed to use such big words down here.

As for Jesse, see my earlier comments: Hence the phrase, "WHAT PLANET ARE YOU FROM"...