There Will Be Gnomes

When I met the person who bought my mother’s house, he told me that he had great plans for how it would be decorated. I was not really interested but I listened politely until he told me about the twinkle lights on the trees. I made some excuse and bid him a fond farewell. It’s not that I have anything against twinkle lights—in fact they are among my favorite kind of lights, but for whatever reason, I just didn’t want to hear about twinkle lights or the inevitable possibility of Gnomes -- which I felt assured would be the next decorating revelation. Today was the first time I saw the house since we signed the papers. It was weird to be right there and not be able to go inside—even to go to the bathroom. Maybe everyone who sells their childhood home has the same kind of reaction to this kind of loss, but Jeff and I have been incredibly depressed. It makes no sense since neither of us have spent any real time there in the last ten years, but it has been a very difficult to deal with the fact that it is no longer available to us.

And speaking of Gnomes, Larry Eagleburger, a former Republican Secretary of State (and now a full time overweight blowhard who can’t even remember the name of the Soviet leader -- it was Nikita Khrushchev, who would look cute holding a lantern on any front yard), was pontificating about Obama’s lack of international experience – as opposed to Sarah Palin who can see Russia from the Alaskan Border. (It was a cheap shot but after all, when asked by a third grader what the Vice President’s job—she answered incorrectly. So a cheap shot now and again is perfectly acceptable). 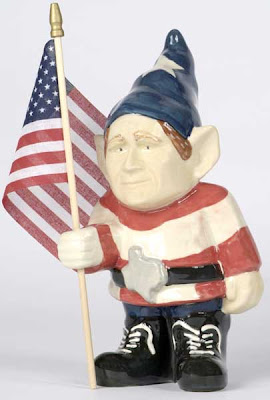 But enough about Sarah and Larry. How about the Three Stooges – Democratic style. Joe Biden predicted an international catastrophe during Obama’s first term. Something that would test him and we all will need to help. What kind of drugs is he taking? Then Kerry makes a joke (not a good one) about adult diapers and the campaign. And Jack Murtha calls his constituents red necks. I won’t even try to tell you what Barney Frank meant when he talked about taxes in a Democratic Administration. Is that Four Stooges? Remember when your mother used to say “If you can’t say something nice don’t say anything at all”? Didn’t these guys have mothers? As if Obama didn’t have enough trouble closing the deal—these guys aren’t even trying to help him make a sale.

And speaking of closing the deal, what in the world are the pundits looking for 14 days out. Do they want McCain to throw in the towel? To ask for a job in the Obama Administration? To denounce his military career. The game is not over. People may be voting early, but no one will know the count of those votes until election day. As my old friend Puccini would say, “It’s not over until the fat lady sings.” The polls be damned. No one knows how anyone will vote until they punch the chad, pull the lever, or hit the computer button. No one knows if young people will actually vote or if there is a “Bradley” factor. In other words, things may be looking good for the Democrats but we’ve been there before and managed to blow it. Do you think this is the me who is glass half full? Ordinarily I would agree, but not this time. There is just no telling how people will actually vote despite what say they because there is no predicting human nature (wow that is heavy man – that’s me being a 60’s flower child).

So what’s a Gnome to do? Mostly they stand outside someone’s house. They can hold a lantern but that’s usually a jockey—and we don’t see many of those anymore. Gnomes are usually accompanied by other Gnomes. I’ve never been into friendly looking inanimate objects standing willy-nilly on a lawn, but I guess there must be something to it because people spend anywhere from $10 to hundreds of dollars to have them in their gardens. The most interesting Gnome I have encountered, and OK I haven’t encountered many – is the Bushgnome. I swear, there is a company that makes a Gnome in the image of George Bush. (http://www.bushgnome.com/detail.html). They are hand numbered and run about $35.00. My own personal favorite is the Bushgnome holding a flag. I wonder if there are other companies that produce other Gnomes in the news. And I wonder what you have to do to become a Gnome in the news? A Gnome by any name is still an eyesore. OK time to move on.

The election is fast approaching. My childhood home belongs to someone who will cover it with twinkle lights. Sara Palin doesn’t know what a Vice President does. And there are Gnomes that look like George Bush. It’s a list like this that finally takes your mind off the economy. We’re just sayin’…. Iris
Posted by Iris&David at 1:08 AM

I said I wouldn't grant you another 'Atta Boy' until after the election, but damn if you didn't earn a whopper of a big un here!

It's always fun watching you sling 'STUFF' towards those most deserving (your own party no less) but why insult the good name and character of the 3 Stooges by including Barney Frank among them? They really do deserve better!

I loved Barney when we were kids in Boston and he was an advocate for justice, peace and the American Way. I don't get what he's doing and there's no need to defend himwhen he's acting like (as we say in the Burnett household) a nidiot.