How Do You Judge a Debate?

How do you judge a debate? Many pundits had pretty much the same things to say about last night's debate, but that’s no surprise. Most thought Biden was good and Palin wasn’t horrible and that was such a relief and a surprise. Wow, she didn’t appear to be a total idiot—reason enough to cast your vote for the Republican team. It was difficult not to be bored by editorials this morning but the most interesting was Charles Krauthammer who I never read because he makes me cringe. But I heard that his editorial “Hail Mary vs Cool Barry” was quite unusual – he said nice things about Obama. In fact, he comes very close to what could be called an endorsement only it’s Krauthammer so you know it is not something he would ever do. At least he didn’t say Palin is not a dope, so she is absolutely prepared to be Commander in Chief. 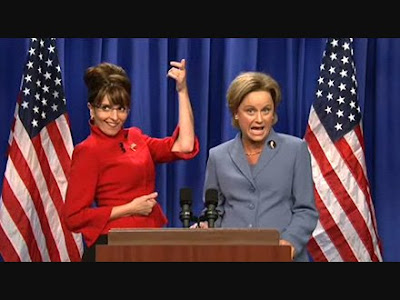 I was looking through my old files this morning — I was at one time an actual ‘speech’ teacher. That was before it became Communication Arts and I became a Communication Strategist or as I prefer, a Communication Tactician (that means I know how do something as opposed to just talking about it). Anyway, when I taught 'debate and argumentation' part of my job was to prepare an evaluation of substance and presentation for the students—so they would know how effective they were in communicating their message or how victorious they were in beating the verbal crap out of their opponent. In a debate there is an affirmative side and a negative side with the question phrased in a way that makes it defensible by each team. Each side must support positions through clear argumentation and legitimate supporting evidence. As you know, what we see in a Presidential campaign is not actually a debate. It’s more of a discussion about positions and ideology. So let’s skip the technicalities and move to how we evaluate whatever they did. When I was teaching I had to look at style, content, and for example, was it adapted to audience, appropriate for the occasion. Think about these things relative to what you saw. Did the content have: Interesting ideas. Was it supported by facts and/or examples. Did the speaker have adequate knowledge of subject? Did they use appropriate appeals (logical, ethical, emotional) and information using syllogisms, analogies, facts, references, quotes etc? Was it organized with attention-getting introduction and good points? Did they have a strong conclusions? Then I looked at delivery, because if they are boring or not emphatic they might as well not have come to the party – that’s with a small 'p'. So I looked at things like projection, phrasing, grammar , gestures, articulation, enthusiasm, eye contact, poise, distracting habits, vocal variety/tone and appearance of truthfulness. The media would simply ask, was it authentic? That is the new favorite word and I find it so pretentious. When the pundits have nothing else to say, they talk about whether or not the candidate is authentic? Candidates are never authentic. That’s why they got where they are. But that’s a different blog.

It is unclear who won the debate because as I said, it wasn’t really a debate. It was more of a “you did, no you didn't” or “he wants no he wants.” I had those conversations when I was getting divorced. There was never any good news, just bad feelings. Sarah Palin didn’t screw up and that seems to be a measure of the fact that she can be the Vice President. She didn’t give the comedy shows much material – except when she winked at the audience like there was a secret that she and some of the folks watching in Alaska or Montana shared, and everyone who knew anything already knew what she meant. Oh, and then there were the “Betcha’s” and the “Golly gee whiz” phrases. So maybe she did give the late nights some material, but not even close to what it could have been. Her speech pattern was just plain down home and her presentation folksy and adorable, (yech!) but does this mean she’s qualified to be the Vice President or maybe even the President? I’m not comfortable with it.

Obama has spent over a year making the case about why he should be President. While his Presidential experience may have been limited he has had to discuss his vision, develop a world view (he has also lived in another country and had a passport for more than fifteen months), and his management ability is easily seen by looking at the fact that he has actually put together quite an amazing campaign. Sarah Palin might be personable, even delightful (although I was offended by the winks), but with the serious crisis in the economy, the war, immigration, loss of jobs, the lack of opportunity for so many and the greedy nature of not a few, we cannot afford to have an untested, cutesy, less than worldly (and I mean that in the nicest possible way) inexperienced person only a heartbeat away from the Presidency. Were just sayin ...Iris
Posted by Iris&David at 1:00 AM