One of the joys of the New York subway system is not the fact that there is a train about every five minutes to take you wherever you want to go – when they are working – which, most of the time, they are. Well, if that remarkable fact is not one of the joys, you might ask, then what is? The subway entertainers.

Yes, well under the ground at all hours, there are singers, musicians, and bands of performing artists, who either remain in one spot at a subway station, or they jump on and off the trains – holding the passengers virtually hostage – while they entertain and asked for money. Mostly, and surprisingly, they are pretty talented. You may not care for their music or style, but they are usually pretty practiced at what they do. 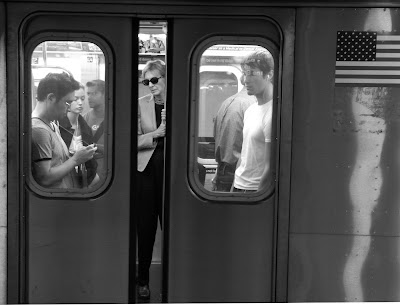 When you ride the subway with great frequency, you get to know the performers and often develop favorites. Among my favorites are the Chinese musician who plays a mouth harp, an elderly Black woman who sings “Amazing Grace”, a hip hop artist who uses a tape player as background for a most athletic dance, and a guy who does imitations of the subway sounds – oh and a Mariachi band in costume. My least favorites are the guys with bongos or other kinds of drums. Not because I don’t like acoustic performance but because they are incredibly intrusive in a small space. There are also young aspiring musical theater performing artists who use the money they make to pay for voice lessons, and older ‘used to be’s” who just love performing but can’t get other gigs. The list of who, why, and where, could go on for pages.

Tonight, for the first time ever, there was an ‘artist’, who was so awful that it was actually funny. At first, I thought he was being horrible, intentionally. I mean people were laughing out loud and commenting on the fact that he was so bad you couldn’t even tell what he was singing. But that was not the case. He was perfectly serious about the performance – which we all finally realized was Beatles music. Not only was he off key but he was loud—very loud. And he sang with such assurance. Kind of like a 3 year old who just wants to sing and doesn’t care how it sounds or if he knows the words. It is unusual to bond in the subway because the performer is so terrible that comments seem essential. Short of passing out earplugs, people were pretty united about the awful sound emanating from the 54th street end of the Lexington stop on the E-train.

When I got on the train I was in a particularly good mood—still chuckling about the wannaBeatle. I was on my way to the 5th anniversary celebration of “Wicked”, the long running and all over the country show. You may recall that they didn’t win the Tony Award (Avenue Q took those honors) but it didn’t matter in terms of success. Anyway, this performance was a celebration of the way the show was presented originally. It included songs and scenes that were cut in previews. It was so interesting to see how it started out and how it finished. Let me say, I’m glad I didn’t see the show in previews, but not because there was a shortage of talent. These performers were amazingly talented. Even when the material was only passable, the voices, together and separately, were fabulous.

As I watched what was happening on the grand stage of the Gershwin Theater, I flashed back to the underground tunnel on Lexington Street. At the Gershwin people were paying rapt attention to everything happening on the stage. They wanted to be a part of the success on the stage. The musician trying so hard to compete with the rush hour crowds was more an amusing intrusion than a serious player, but in his own way, he did manage to get people to listen to how awful he was. They had the same goal but were using different tools to achieve it. I must say, I did like both equally in different ways. I guess I just like the idea of being entertained and whether I pay to do it or happen upon it (in the subway or in Times Square), it’s still OK as long as it makes you smile. We’re just sayin...Iris
Posted by Iris&David at 8:52 AM