It’s impossible to figure out what’s going to happen with this election. Sure, I know that Obama has (if the polls and the pundits are right), enough electoral votes to win even without Pennsylvania and Florida. But last night there was an election special where they talked about ‘inadvertent voter fraud.’ What does that mean. Well, for example, if you are voting on a machine and you touch the ballot a little too close to the line, it votes for McCain instead of Obama. I don’t know why it doesn’t vote for Obama instead of McCain if you touch too close to that line, but it just doesn’t happen. In addition you hear a great deal about how the machines are ‘fixed’ and there’s no paper trail back-up to check. In my mind, that means anything can happen and the winner is the winner, regardless.

In 2000 when Al Gore won the election but George Bush went to the White House, there was no recourse. And I remember too well, the Gore friends and family Christmas party after this devastating loss, when people were still walking around talking about how they won. “No”, I kept saying, “We may have had the most votes, but the winner is the one that gets to live in the White House, has Secret Service, and gets to help their friends get rich.” Why is it Democrats don’t get rich when their friends are in power –except Terry McAuliffe, who seems to be getting richer and richer.

Let’s spend a minute or two on getting rich. Yesterday when I was coming up in the elevator at my apartment, there was a young woman, on her cell, talking to what seemed to be a friend. She was telling whoever was on the phone, that she had lost her job in the brokerage house, had no savings, was totally broke and she didn’t want to have to move back in with her parents but she couldn’t afford her monthly nut and she didn’t know what she was going to do. I imagine she is not the only NY stock market-related person suffering the same consequences of the financial crisis. I also imagine there are going to be millions of people who are going to lose their jobs, then their homes, and eventually any life they were living. Maybe the younger people can move home. Maybe they will have a place to live until the market turns around or the economy gets better, but what if their parents lose their home, too? What if the people who are affected by what’s happening, aren’t young and resilient. And what if they are us? 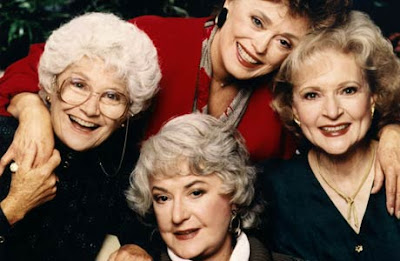 The other day I was quite moved by an episode of “The Golden Girls”. If you’ve never seen this television treasure—it’s worth finding and watching. I think it’s on Lifetime Television. Anyway, the main characters -- 3 women in their 50’s or 60’s sharing a big Florida house – and one of their mother who might be 70 or 80 -- it’s never clear. They are all either divorced or widowed. In the episode I was watching, one of the women loses her dead husband’s pension and had to find a job in order to continue living the life to which she has become accustomed. She searches for a job but suffers age discrimination, and can't find anything. At some point she talks about a homeless woman who she passes everyday and to whom she never paid attention. But then, when she looked at the reality of her situation and she looked into the woman's eyes, she realized that she could be that woman. It reminded me of a woman (I thought she was older but who knows), I bumped into around 48th street a few months ago. I said, “excuse me” and she said, “it's alright at least I was not invisible to you.” Her conversation didn't end there. She followed after me and continued to talk about how her husband died, she had cancer and had no income just expenses, she couldn't find a job, she had no kids, she lost her apartment, and she was living on the streets just waiting to die. She went to soup kitchens and shelters. It was dangerous on the streets but she didn't expect to live for long and she thought she could die in a hospital if she was really sick. She asked me if I could spare a dollar. I gave her five and still felt like crap. It was a real “there, but for God, go I” moment because the truth is, you just never know.

As you know, I'm pretty good humored most of the time but every once in a while something happens that makes me think and still I can't find funny. It's how I feel about this election. SNL is incredibly funny and perceptive about the candidates and the politics. Stewart is good and Colbert is better. But when I look around I can't imagine how any of us are going to fare in this terrible time. I am hopeful that we can turn things around and we will be able to continue to spoil our kids. But when? And how will it happen if there's more of the same? The Republicans need to suffer a catastrophic defeat in order to start from scratch and find important issues rather than those revolving around our bedrooms. The Democrats need to be careful and courageous. We absolutely need change, but no one knows what it will be. We're just sayin....Iris
Posted by Iris&David at 6:06 PM