I had a series of quite dedicated history and social studies teachers in junior high, and high school. Most of them had actually done something in their lives before they became teachers (which doesn’t imply that teachers, teaching, aren’t doing anything.) Mr. Tolman had flown B-25’s over Europe as a young man, and contrary to a lot of the vets who would tell you what great pilots they were, he uniformly recounted to us, in a lecture he affectionately called “...And There I Was...” how most of his bombs ended up in cow pastures. But as the crucible of war is seldom one-sided, whatever toughness he might have imparted to his students, and he was a stickler for making us do things right, and on time, it was often coated with a just below the surface air of encouraging friendship. I think he wanted to be thought of as a tough guy. It certainly got his homework done on time. Mr. Barton, the math whiz who was my home-room Calculus class teacher, had been a helicopter pilot in Korea. Flying those glass-bubble choppers to MASH units, with all their quirkiness, had taught him that little movements can cause big results. And he reminded us that in Life, as in flighty little dangerous helicopters, it’s good to be gentle on the pedals. I don’t remember all that much about Jesse O. Carter (History) -- the first Southern accent I ever heard – or Horace Bigler (Revolutionary History) – born in northern Utah in 1901, and yet who owned a knowledge of early American history that was unrivaled, and an enthusiasm for it, unbridled. But I suspect there was something in their backgrounds which created an oblique line between high school and teaching, some element of life in the 30s, 40s or early 50s, which might have given them just the kick they needed to end up in suits and ties, teaching thankless 8th graders. 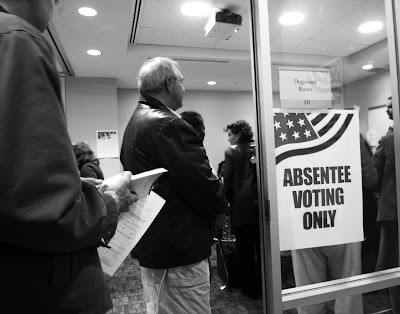 In a certain way, I think they had lived some of that history, and weren’t merely ciphers completing their own education to then turn around and teach others. They were involved, and whether it was a mission to contain the Nazis, or a Mission from the LDS church, to try and spread the Gospel, they were fully committed to living their lives by doing, and not just 2nd hand recounting. In the fifties it was still well within reason to imagine a married teacher, single-income family, easily raising a family without any sense of deprivation. Today, it seems to be a struggle, in the world of ever increasing prices, to do so. 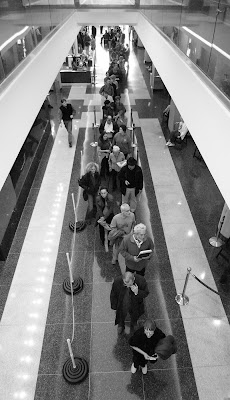 My earliest memories of politics and things Presidential go back to the political conventions of 1956. I was ten. I have, really, very few memories other than some distant moment where the topic of the Eisenhower-Stevenson election came up, and I heard, in one of the few divergences of opinion that I remember, that my dad was voting for Ike, and my mom for Adlai. Even then it struck me as slightly odd that my folks, who saw so many things in similar ways, would part company on that big a choice. In 1960 I remember the distant droning of Convention, with the nominations of Nixon and JFK and a single moment in my Sunday school class when Toni Hahn, now Asst. Dean at the Yale Law School, commented that in visits to Salt Lake by the candidates that year, that Kennedy received a “we wish you well” from the LDS Church leadership, while Nixon garnered a “we hope you win.” By 1964, when I was already a budding photographer, I tried to get to the Cow Palace in San Francisco for the Republican convention, the Goldwater Convention. Didn’t make it. And by 1968, having just begun my career in earnest, I started what would be a four decade string of absentee voting. In most cases the reason I couldn’t vote at my home precinct was that I was running around with one or another candidate. Carter, Carter, Bush, Clinton, Gore, Kerry. (In 1984, having determined I wasn’t needed in the voting process, I went to Ethiopia to photograph the drought and famine, a process far more moving and compelling.) There is a French chronicler of American elections who thinks, in fact, that there is a rule: anyone I spend a lot of time with on the campaign is surely NOT going to emerge victorious. More than half the time that has proven correct, yet I try and imagine that such calculations, like the ongoing compulsion to monitor state by state polling, are basically worthless, and that in the end, the electorate, as large and amorphous as it may be, has its own way of working out the decision. 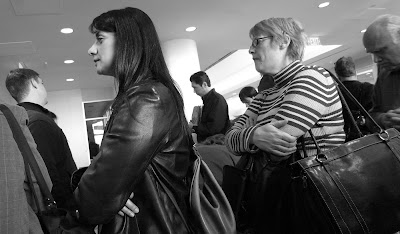 Today, I again did my part to try and move the process forward. I have been photographing the main candidates for this race for nearly two years: Obama, McCain, Clinton, and the others, have all fallen victim to my lens. I have chased them in snow, tropical heat, crack of dawn, sunset, and beyond. And now we are down to just the two of them. I spent time with both candidates in the last two weeks, and, as always, even when I don’t think I’ll see that ‘magic’, felt that rush of energy and excitement which accompanies those long days on the road. The process, like much else in our society, has become far too influenced by money, at the expense of courtesy, thoughtfulness, and sober analysis. Cable TV and the bloggers force a situation where every moment becomes self-important, every potential screw-up, a “gotcha” that will lead the next news cycle. Little is left for pondering instead of pandering. So we arrive at a place where the final week sees a real-life version of Celebrity Death Match, the MTV claymation wrestling match of 10 years ago. May we only get through the next few days. 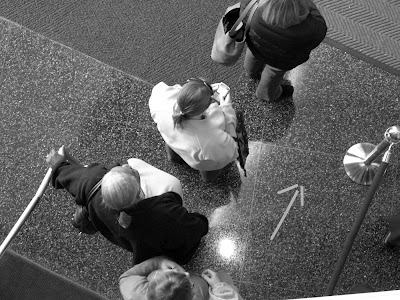 But this afternoon, aware that for one more time I will actually be with a candidate on Election day, I trooped over the Arlington Court House where an amazing scene was unfolding. By the hundreds, lines of locals were patiently waiting to cast their votes this year. 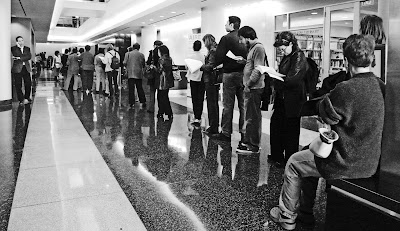 While we all may want this incessant process to finally come to an end, it seems no one wants that to happen without being a part of it. I waited a full hour to vote. Half way through I began to have the involuntary fidgeting journalists get when they can’t get right TO a place. No, I had to wait like everyone else, and finally I came face to face with the electronic voting machine. Unlike much of the rest of our lives, there was an abundance of courtesy – saving a spot for those who had to re-feed a parking meter or hit the ladies room. 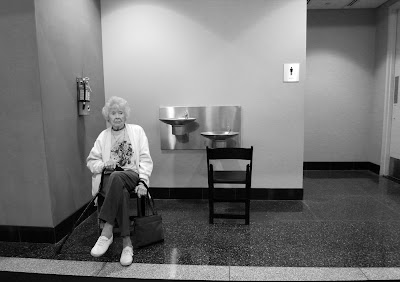 It was as if we were all silently bathing in the joy of thinking that for once, our voice really might matter. And almost as if characters had stepped out of Mr. Bigler’s History class, there they were: in front of me a man named Ahmed from somewhere in the Middle East. Just behind me, a Russian couple who kibbitzed in gravity-laced Slavic accents as they read through the proposed county Bond issues. It was clearly their first time at this. And in the final room, the head of the snaking line, no chads.

Just touch the names on the video screen, and a hope that it actually records your vote the way you directed it. In the early sixties when the League of Women Voters were a constant presence in our house (my mom was two term state President), the phrase you always heard around election time was “See You at the Polls!”, said with a wink. 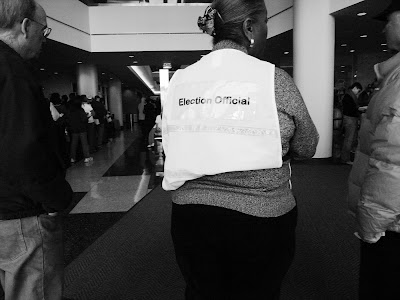 It was a kind of general affirmation that we should all take part in this most democratic of processes. Today, looking at the streaming lines at the court house, I was happy to see everyone else had winked back. We’re just sayin...David 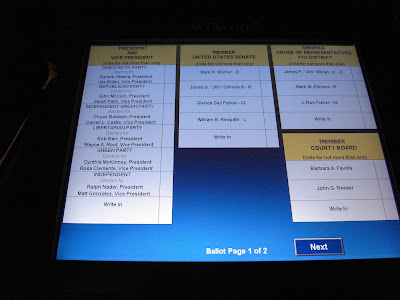 As always, click on a picture to see full size
Posted by Iris&David at 11:13 PM

the lines across the country, one could almost say they were biblical

I agree..This is an important process and those who do not appreciate it had never seen what some others have challenged to simply place a piece of paper in a box in countries they probably never heard of.. I hope the best for us all, and I'll do my part Tuesday!

The car is a VW and we want to be able to play our iphone and ipod through the car stereo. We have tried to use an Fm transmitter but it dosnt work very good. Is there any adapter which we could use?