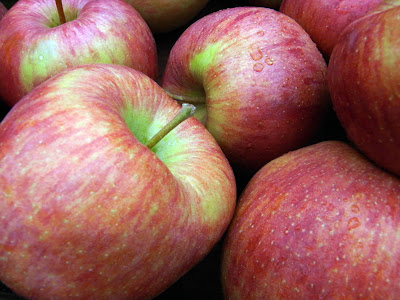 When I was cleaning out my Mothers house I had to sift through many items and decide what I wanted to keep and what I though should be tossed. The whole process of looking at your past through a variety of items makes you think about the things that are precious to you. And it doesn’t start and stop with possessions. For example, while jewelry may be expensive it’s not necessarily precious. I should say here that many people have asked if I found any treasures when I was going through the stuff—those people clearly didn’t know my mother. She had no treasures – she had a great deal of “dreck” (that’s Yiddish for crap). This does not mean that I didn’t find precious items – but not in the traditional sense.

Mom decided to go back to work in about 1960, and her choice of profession was in the area of self-improvement. She got a license to be a beautician and converted the basement into a beauty salon. She worked hard to develop a clientele but her marketing skills were not developed so her customers were mostly family and friends. It was wonderful to have a real beauty parlor sink and hair dryer at my disposal and on more than one occasion I played beauty parlor with my friends—sometimes resulting in a successful hairdo and sometimes there was a disaster—like the time we colored my friend Joyce’s beautiful blonde hair a very deep green. (It was the 60’s and brightly colored hair wasn’t yet the fashion.) Anyway, last week we found the 1958 hair dryer in the back of a closet. It was in a pretty grody state, but we all loved that space helmet piece of equipment. So after much thinking long and hard about what to do I called Tina – my partner in what today might be considered criminal activity. “Don’t you dare throw it away”, she said. “Take it apart and make it into a lamp”. For whatever reason, that hair dryer was precious to me and I couldn’t part with it—so it’s on it’s way to an electrical genius who can do as Tina suggested.

During this whole process my thoughts wandered to concrete things like a hand made quilt, a crocheted blanket, or pictures. But I also thought about not so tangible things like relationships with family and friends and, of course, more elusive things like personal freedoms. Like so many of us I am concerned about the ever increasing threat of the loss of freedoms we have come to expect. For example, while Sarah Palin did not actually remove books from libraries, there was a discussion about books that were (in her estimation) not appropriate (for whomever wanted to read them I guess). I like having access to all kinds of books, especially in public libraries, where they are free and plentiful. Additionally, I am scared to death when any conversation turns to pro-choice and anti-choice issues. There is no doubt in my mind that everyone is pro-life, whether or not they believe in abortion. But admittedly, I remain confused about why anyone would let that determine who other people marry, and what their sexual orientation may be. I mean, I am more concerned about children who get married because they are pregnant, and adults who don’t have sex, than I am about loving couples loving.

There are also precious things that are almost indescribable because they are moments rather than belongings. After we finished packing the house we came back into New York to meet friends for dinner. We left the apartment in plenty of time but we couldn’t find a cab. We walked a few blocks and it became obvious that there were no cabs available. David stopped a few empty limos, but they wanted $20 to go across town. David, being David, determined it was too much. After about 15 minutes a limo appeared that was much more reasonable. Yuri (that was his name), wanted nothing. OK, it was NYC and you probably think he must have wanted something. And, in fact, he did. He wanted us to look at some of his art – computer art. That was all. So we looked. When we arrived at our destination I handed him $10. He refused to take it. But I insisted that it would, at least, cover his gas. He thanked us for the conversation, gave us his number and said he hoped to see us again. It was a lovely, I thought, precious encounter. 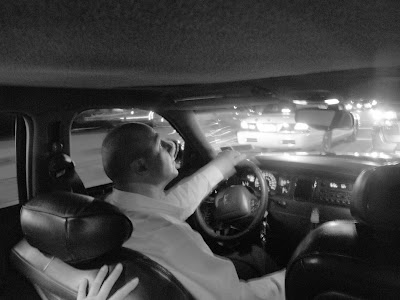 Yuri at the wheel
On Saturday we decided to go to the Union Square market to buy apples. It was noisy, crowded, and bustling with activity. Luckily, what started out as a fairly bleak morning turned into a perfect crisp, windy and cool fall day. Just like the apples in the farmer’s market. A perfect day for a brisk walk to a hearty breakfast. First we wandered through a street fair (my personal favorite NYC activity). Then we walked through the Gramercy Park area and on to Murray Hill. As we crossed 33rd Street I noticed a shabbily dressed, elderly man using a walker, carrying a sign. There was something familiar about him. It took only a few seconds until I recognized him as Professor Irwin Corey, a zany 95 year old comedian who, always dressed in a tuxedo, and spent many late nights on the Johnny Carson show. David couldn’t believe it was the Professor. But we stopped to say hello and make some amusing conversation. He was still entertaining, full of ‘one liners.’ We took a few pictures and went on our way. The encounter was entertaining but, like so many things over the last few days, it was bathed in that special kind of moment, and made a memory I won’t soon forget. 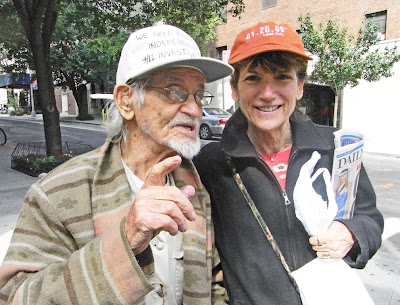 I think it is important to treasure those moments, relationships and possessions we think are precious. And it is equally important to fight as hard as we can to make sure we pay special attention to the care we give to more elusive things like personal freedoms so that they don’t disappear with items we might choose to discard.
Posted by Iris&David at 10:49 PM

The statement written on the Professor's hat says it all! Your's too!

Must have been "Wear Your Far Left Ball Cap Festival Weekend" on Murray Hill...

Alfonso Cevola said...
This comment has been removed by the author.
9:33 AM

RE:That picture of you and David. Man he needs to slow down, get some rest, he's looking all "worn down" from work;)
-JK